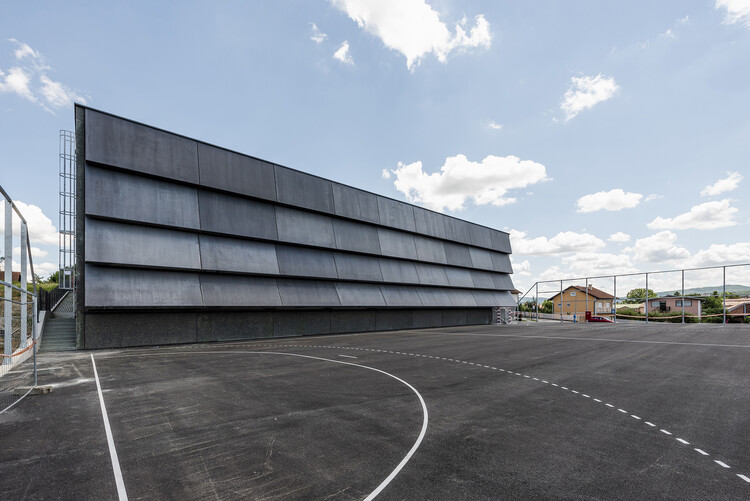 Text description provided by the architects. Zlatar Bistrica is a small town located in one of the few plains of otherwise hilly Hrvatsko Zagorje in northwest Croatia. The western perimeter of the school square in Zlatar Bistrica used to border a sports hall that had been destroyed by fire, and the new hall project inherited its former orientation as an important parameter to be integrated with the building’s new external and internal configuration.

The hall has been placed on a lot sloping toward the west and configured to respond to the given urban and topographic determinants. The perimeter around the hall is designed to establish a connection between the school square and the lower plateau with an open court and school parking lot for the school bus and vehicles bringing children from neighboring villages. From there runs the main pedestrian access configured as a system of a stairway and a ramp.

The interior reflects this sloping exterior pedestrian configuration. The façade that opens to the school square with glazed ground level and entrance allows the public square space to enter the interior and then cascade down the grandstand staircase to the lower sporting level, which is why the square has a clear view of what happens in the hall and vice versa. The square and the hall interior complement each other and exchange views in an almost seamless and direct shift between what goes on in the hall and outside. The outer layer of the hall is made of translucent polycarbonate, which at night turns the entire volume of the building into a lantern illuminating the school square and the surrounding area.

This lantern motif points to the problem of shaping the volume of the hall. The author considered several variations that would be both pragmatic and innovative in form. Much attention has been given to incorporating customized prefab elements that have only recently been introduced to construction and tried out in Croatia. Instead of using generic prefab panels, the author has worked with the Beton Lučko company specialized in concrete prefabs to develop a unique type of panels with the outer and inner layers made of pigmented black concrete and thermal isolation in between.

While their cross-section is standard, their design took some research into production technology. The way the panels are mounted is also innovative. The author decided to give up a conventional design with a completely walled lower section and light openings in the upper section and replace it with horizontal panels placed at an angle from the vertical like shutters to let in diffuse light. The panels are mounted on a steel structure fixed to prefabricated concrete pillars, and their lower, gaping end is closed with polycarbonate. The lowest row of panels gapes at the greatest angle from the vertical, which gradually diminishes with each new row going upwards.

Such a configuration provides enough diffuse light to the interior, prevents glare, and provides better protection from the western sun and heat in the warm season. The exterior, in turn, has a dynamic, rhythmical texture thanks to the slanted panels. These panels are made of a dolomitic aggregate diabase of an original green hue mixed with a black pigment added in production, which is why the smooth “black” concrete is never entirely black.

Additional hues and even colors are obtained with different slanting of the panel rows as they reflect the color of the sky differently. On average overcast noon, these hues and colors span from lead-grey to matte dark green, while on a clear sunset the colors can even become warm. At night, the western façade is distinguished by horizontal stripes of light emitting from the interior on the pavement running along with the sports court.

Panels on the gable walls are not as polished as the west façade and yield a greenish texture of the aggregate diabase bearing reference to greenstone slates from the nearby Medvednica mountain, which used to be a popular local construction material, now completely exhausted. The matte color palette is completed with black iron plates and sheets of which fences and screening window panels are made. Interior space and surfaces, including the ceiling, are configured to reflect the precise geometry of the bearing prefab elements.

Load-bearing verticals and horizontal beams are made of concrete prefabs, also in black. They carry the grid-like structure of the roof made of laminated wood supports, whose light material contrasts the heavy concrete skeleton. Along the western roof, the area extends light domes that provide additional natural lighting. The author has given much attention to the modular configuration of the building and infrastructural elements, having neatly integrated artificial lighting and air conditioning and ventilation elements into the geometry of the whole. Previous post Analysis: January 6 committee wrestles with the same unsolvable question about Trump — how to hold him to account