Reemerging into political life a little over a week after insisting she wouldn’t run for leader of Meretz, Zehava Galon announced on Tuesday that she will vie for her former post in the left-wing party’s August 23 primaries.

Shortly after announcing her candidacy, Galon met with Prime Minister Yair Lapid. According to a Galon spokesman, she told Lapid she was committed to the “change bloc” under his leadership.

Joining the race as Meretz’s Knesset future looks uncertain, Galon will compete against Deputy Economy Minister Yair Golan for the party’s top spot. Incumbent Nitzan Horowitz announced last week that he won’t run again for the chairmanship, but will remain on the party’s Knesset roster.

Meretz, the Knesset’s left-wing pillar, has had a rocky year. Horowitz guided the party into a governing coalition for its first time in two decades, but the diverse political partnership challenged the party — and its members’ — ideology.

Although seeded into the party through a guaranteed spot, Arab Meretz lawmaker Ghaida Rinawie Zoabi said her “conscience” blocked her from maintaining coalition discipline on some matters related to Arab and Palestinian affairs. Rinawie Zoabi’s rebellion was part of the discord that led to the collapse of Israel’s 36th government.

Rinawie Zoabi will not be returning to the Meretz slate, nor will a number of party stalwarts. Last week, Environmental Protection Minister Tamar Zandberg herself a former Meretz leader, announced she was taking a break from politics and would  not be running for the next Knesset. A week before that, another veteran, Regional Cooperation Minister Essawi Frej said he was leaving political life. 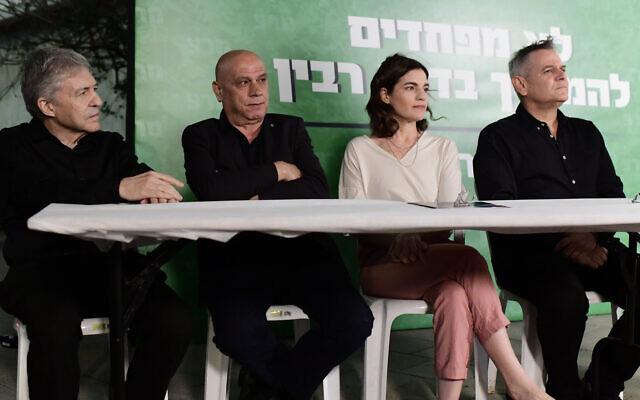 Although reports have speculated over the past week that Galon would announce her return, she has been publicly tightlipped. Two weeks ago, she told The Times of Israel that she would not run for Meretz’s top spot.

Frej has repeatedly called for Galon’s return, and faction chair MK Michal Rozin is also reportedly part of a team that encouraged her comeback.

In an interview with Channel 12 that aired shortly after her Tuesday announcement, Galon insisted that she had not intended to return to politics, but that the calls for her to salvage the party became too much for her to ignore. She said she wouldn’t have been able to forgive herself had she stayed on the sidelines and watched Meretz fail to cross the electoral threshold with the more polarizing Golan at the helm.

Galon clarified that she does not view herself as a savior of the party, but did note that she managed to double Meretz’s power from three to six seats in the 2013 election when she headed the party. She neglected to mention, though, that the party fell to five seats in the subsequent election.

Galon has prided herself on struggling for “equality and justice” for communities including women, the LGBTQ community, and Palestinians. She also has fought against economic corruption and the erosion of democratic values.

In October 2017, she abruptly quit the Knesset, citing the need to bring “new blood” into the party by switching to an open primary system, which the party now has.

Golan, Galon’s sole challenger, has said that Meretz’s base tends to be more affluent, and that he himself can be an advantage to the party because he is not dyed-in-the-wool Meretz.

Golan himself was brought in by Horowitz in 2020 as part of a political alliance in advance of elections. 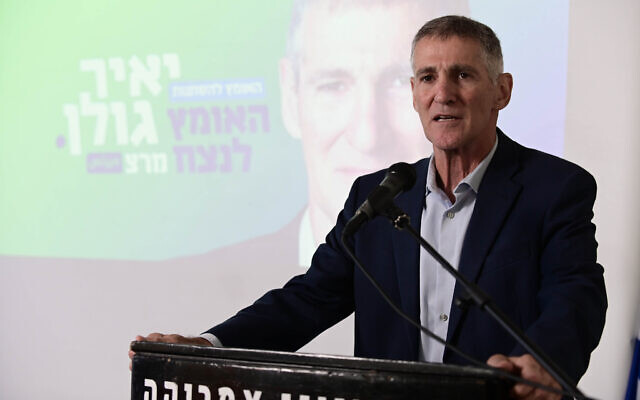 Deputy Economy and Industry Minister Yair Golan announces that he plans to challenge Nitzan Horowitz for the leadership of the Meretz party in the upcoming primaries, during a press conference in Tel Aviv, July 6, 2022. (Tomer Neuberg/Flash90)

Both Galon and Golan have indicated their interest in uniting Meretz with the center-left Labor party for the upcoming elections, a prospect that Labor leader Merav Michaeli has repeatedly dismissed.

Galon said in her Tuesday interview that a merger with Labor would “maximize” the power of the two parties.

“If I am elected Meretz chair, I think [Michaeli and I] will sit down together and talk about a joint slate of Meretz and Labor for one purpose at this moment — to save the [left-wing] bloc. I think two female leaders heading this union — which has never been done by the way in the State of Israel — can increase our size and bring some energy and momentum,” she told Channel 12.

If Meretz continues to flirt with the electoral threshold, Michaeli might feel increased pressure from center-left political partners to throw a political lifesaver in order to prevent Meretz’s left-wing votes from being discarded.

However, with Galon at the helm, some polls add a seat to Meretz, which may come from Labor. If the two parties cannot successfully widen their electoral base to new audiences rather than by poaching from each other, unification talks might become more likely in advance of the September 15 deadline for finalized candidate slates.

In recent years, Galon has served as the president of Zulat, a policy group that works on issues related to equality and human rights.