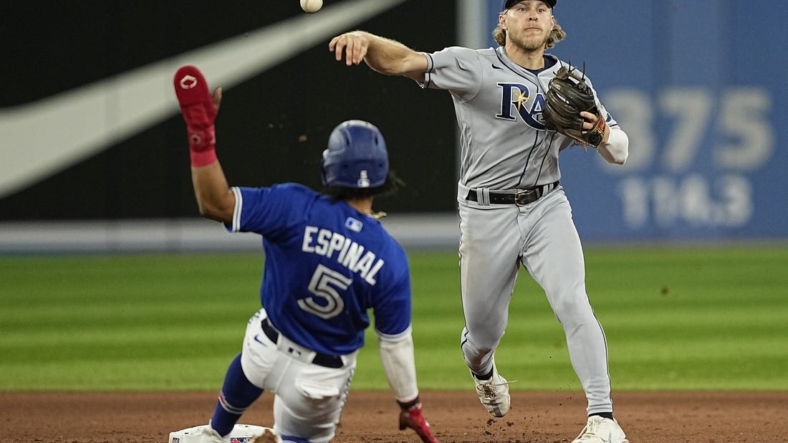 The Blue Jays (81-62) have won three of the first four games of the five-game series between teams battling for seeding in the American League wild-card race.

Harold Ramirez hit a solo home run for the Rays (79-63), who have lost five of their past six.

Toronto right-hander Ross Stripling (8-4) allowed one run, three hits and one walk while striking out four in 6 1/3 innings.

Guerrero hit his 28th home run of the season — and No. 100 in his career — with one out in the bottom of the first.

Stripling worked around Manuel Margot’s two-out double in the second by striking out Christian Bethancourt.

Santiago Espinal and Jackie Bradley Jr. opened the bottom of the third with singles and George Springer walked to load the bases. Guerrero’s fielder’s-choice bouncer to shortstop scored a run and Bo Bichette followed with an RBI single.

Danny Jansen doubled to lead off the bottom of the fourth, took third on a groundout and scored on Espinal’s infield hit.

Isaac Paredes doubled with two out in fifth for the Rays’ second hit of the game, but Taylor Walls lined out to right.

Josh Fleming replaced Rasmussen in the bottom of the fifth and retired five in a row before Jansen doubled with two out in the sixth and scored on Raimel Tapia’s single.

Ramirez led off the seventh with his sixth home run of the season. With one out, Adam Cimber replaced Stripling and allowed Margot’s single. Paredes walked with two out before pinch-hitter Jonathan Aranda’s fielder’s choice grounder to third ended the inning.

Yimi Garcia allowed singles to Yandy Diaz and Wander Franco to open the eighth before striking out the next three batters to keep the Rays at the single run.

Fleming pitched around Bichette’s leadoff double in the bottom of the eighth.

Anthony Bass allowed only an infield single in the ninth inning.