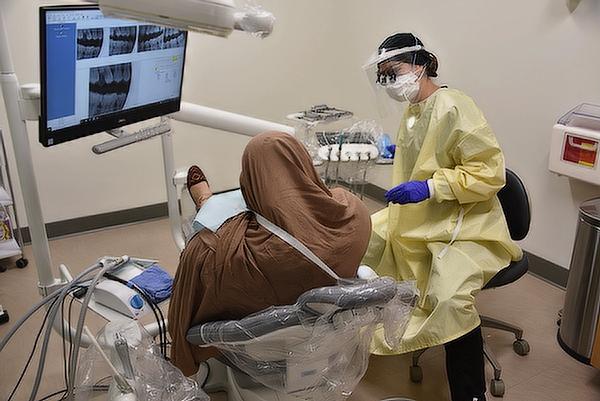 Health care isn’t one challenge Afghan refugees had to address when they relocated to central Arkansas last fall.

Imagine being a 19-year-old pregnant mother in a foreign country, not fully knowing the culture and language, having limited means and finding out there is a problem with your pregnancy. That was the reality for one of 88 refugees served by Catholic Charities of Arkansas.

Jennifer Verkamp-Ruthven, director of Catholic Charities of Arkansas’ refugee resettlement program, said the woman developed placenta previa, had to be hospitalized for more than a month and delivered her child by cesarean section at 34 weeks.

“That can be life-threatening to the baby and the mom,” Verkamp-Ruthven said of the woman whose identity is being withheld to protect her privacy. “She was very, very scared. I mean, only 19 years old, their first baby and to go and be in the hospital. They were worried about the cost and almost didn’t go to the hospital. UAMS (the University of Arkansas for Medical Sciences hospital) said don’t worry about it. Thankfully, she did go to the hospital. Now she and the baby are doing really, really well.”

From obstetrics and dental care to mental health and other specialties, UAMS has partnered with Catholic Charities to ensure new refugees get the necessary vaccines and medical care they need.

From obstetrics and dental care to mental health and other specialties, UAMS has partnered with Catholic Charities to ensure new refugees get the necessary vaccines and medical care they need.

In late August, after the State Department announced it would admit Afghans who helped NATO forces in the 20-year war in Afghanistan, it reached out to organizations like Catholic Charities to form refugee sponsor teams to help them transition and assimilate. Since the last U.S. military plane departed Afghanistan Aug. 30, more than 76,000 Afghans have been admitted to the U.S. Nearly 200 people have resettled in central and northwest Arkansas. Most came with only the clothes on their backs and have had to rely on charities for clothing, food, medical care, housing, furnishings and employment.

Serendipitously, one of Verkamp-Ruthven’s childhood best friends, Dr. Morgan Horn, is a pediatrician and internal medicine specialist at UAMS.

“She is my daughter’s pediatrician, and I just know her as a great person that provides great, great care,” she said.

At the same time, the office of Gov. Asa Hutchinson reached out to the hospital to ask for assistance in providing refugees care, Verkamp-Ruthven asked Horn to see if the hospital would partner with CCA to provide the medical services to the refugees.

“Everyone had to receive a check-up and vaccines (when they arrived at U.S. military bases), and we knew that we would have to do follow-up medical screenings and vaccines because there are different regulations in Afghanistan and the U.S.,” Verkamp-Ruthven said. “With all of the trauma they’ve endured, mental health screenings were important, too.”

While the refugees are eligible for Medicare, they must apply and be approved.

“They had seven days to apply for public benefits, and that includes Medicaid, but it takes a while to process,” she said. “So, UAMS became a partner and agreed that they would provide all care for free until they receive their Medicaid, which would pay for their services. The health department jumped in, too, to provide the vaccines. That’s been a source of comfort. Obviously, this isn’t going to last forever, but it’s just part of the whole transition process, trying to make life easier for the Afghans.”

Horn, who became one of the leaders of the refugee project, said UAMS’ response to the colossal effort was overwhelmingly positive.

“There’s been a number of care coordination efforts that our clinic staff has taken on to ensure that we would have all the resources that we needed to provide care,” Horn said. “There was a vastly different degree of care needed depending on if the patient came from a rural village, where care was sparse versus kind of a more urban area, where it was more accessible.”

Dr. Michelle Krause, professor of medicine and UAMS’ chief clinical officer, said coming from a country that may not have the medical services provided in the United States, this may be the first time some families ever had medical care.

“I’ve been here about 21 years and don’t recall that we’ve ever been asked to do something like this in such a way before,” Krause said. “We were in the middle of a pandemic and had very short notice — less than two weeks — to call on our colleagues to immediately provide medical services to a very different, broad range of patients who would need coordinating subspecialty care.”

Building and fostering trust with these families was the first hurdle they faced. Knowing there was going to be an intimidating, unsettling process, the hospital set up dedicated clinic times to see the refugee patients. Social workers made welcome baskets for every patient and offered hot tea, food and snacks they would recognize.

“Walking into the clinic space and having somebody greet you in your native language was very, very important to us,” Krause said. “We had existing faculty or employees at UAMS that have come from those areas, that knew the dialects, and they immediately volunteered and came out to the clinic to help.”

One of the busiest departments at the hospital has been the dental clinic, which has provided teeth cleaning and assessments for nearly 50 refugees. At one outreach event, dentists provided 13 Afghan patients with 54 fillings and 23 extractions, including a full mouth extraction on a refugee needing dentures.

“We’ve really been very grateful for everything they’ve done,” Verkamp-Ruthven said. “The transition process, health care and having to receive vaccines is very different, very foreign. They’re grateful to have this kind of service. It’s been a lot of comfort.

“Because (UAMS) can provide these services for free, we’re able to use donations toward other things that would have had to go to medical expenses. We wouldn’t be where we’re at with our program if it wasn’t for UAMS. It’s just priceless to have that kind of care.”

Members of the medical team said being able to help those in dire need and getting to carry out their calling has been extremely rewarding.

“I think everybody, top to bottom, feels like we have been able to build relationships, trust and a very safe space for them to come to,” Horn said. “That’s been the very best part of this.” Next post Extending the Reach of Psychedelic Therapy With Psychoplastogens