Let’s flash back to 2019: Alex Lange had just been traded, and he was on the phone with a representative from the Tigers’ front office. That’s when Al Avila and company conveyed that they wanted Lange to convert to a relief pitcher. So not only would he be changing organizations, but he would also be changing job descriptions.

“They told me right away on the phone,” Lange said. “You’re gonna report to (Double-A) Erie, and we’re going to move you to the bullpen.”

It’s an interesting trade to look back on. The Tigers sent Nick Castellanos to the Cubs in exchange for Lange and Paul Richan. Castellanos raked in his 51 games for the Cubs before his contract expired. The Tigers got two decent pitchers in Richan and Lange, but it wasn’t quite clear what either of them would become. The Tigers have since released Richan after struggles and arm issues. And at the time of the trade, the scouting community wasn’t overly bullish on Lange. He had struggled with mechanics and command as a starter. The Tigers, though, had a strong hunch something was there. With a move to the bullpen, they thought he could become a success.

And look at Lange now. He has a 1.45 ERA and is one of the Tigers’ go-to leverage relievers. At age 26, he has a dynamic breaking ball and has the potential to keep getting better. His is a developmental success story this organization could use more of.

Friday in the Tigers’ clubhouse, Lange was asked if he ever thinks about where he would be if not for the trade.

“No,” he said, chuckling. “I don’t deal with hypotheticals, to be honest with you. Very present in the moment.”

Lange, though, was never dismayed by his move to the bullpen. He said he even found it exciting. He grew up admiring a long list of dominant closers. Think John Rocker, Mariano Rivera, Eric Gagne, and more from that generation of intimidating, lockdown ninth-inning specialists.

“I was excited,” Lange said. “New challenge. I’ve always wanted to pitch out of the bullpen. A new challenge to embrace and work for.”

Most players, if they are being honest, don’t actually want to convert to relief. But Lange seems serious.

Lange cleaned up his mechanics over time and made big alterations to his selection of pitches. He posted a 3.45 ERA in his first nine relief appearances at Double-A Erie in 2019, then worked relentlessly during the 2020 shutdown and came back a better pitcher. He impressed manager A.J. Hinch and the Tigers in spring training last year and earned a shot in the big leagues. But Lange didn’t truly break through until he received some tough love from the Tigers’ coaching staff.

He had shuttled back and forth from Triple-A Toledo. And though his stuff could be overpowering, he was prone to elevated pitch counts. Hinch at one point told Lange bluntly: They needed to see him finish an inning in fewer than 20 pitches. They need him to be more efficient, to cut down on belt-high pitches, to control his emotions on the mound.

Lange met the challenge, worked his way back to the majors and returned with a force. Lange had a 1.45 ERA and threw 65 percent strikes in 17 games after his Aug. 22 recall.

He has picked up where he left off so far in 2022. Lange’s first-pitch strike percentage has been noticeably lower (52.9 percent compared with 63 percent last season), but opponents have simply struggled to make contact against him. They whiff more than 60 percent of the time against his curveball and have a 44.7 percent whiff rate overall — the highest swing-and-miss rate of any MLB pitcher who has faced at least 50 batters this season.

Lange’s curveball is effective despite relatively average spin rates and below-average vertical movement. That’s because Lange’s curveball spins on an axis close to 6:30 on a clock. It has an uncanny resemblance to his fastball until it drops off the table.

And though the pitch doesn’t have insane movement, Lange throws the curve at 85 mph on average. The hard, late movement often leaves hitters fooled.

Lange’s success has been a testament to his stuff and his determination. And he might not have unlocked it if not for the trade and the move to the bullpen.

“He pitches with a ton of adrenaline and emotion,” Hinch said earlier this year, “and I love that about him.” 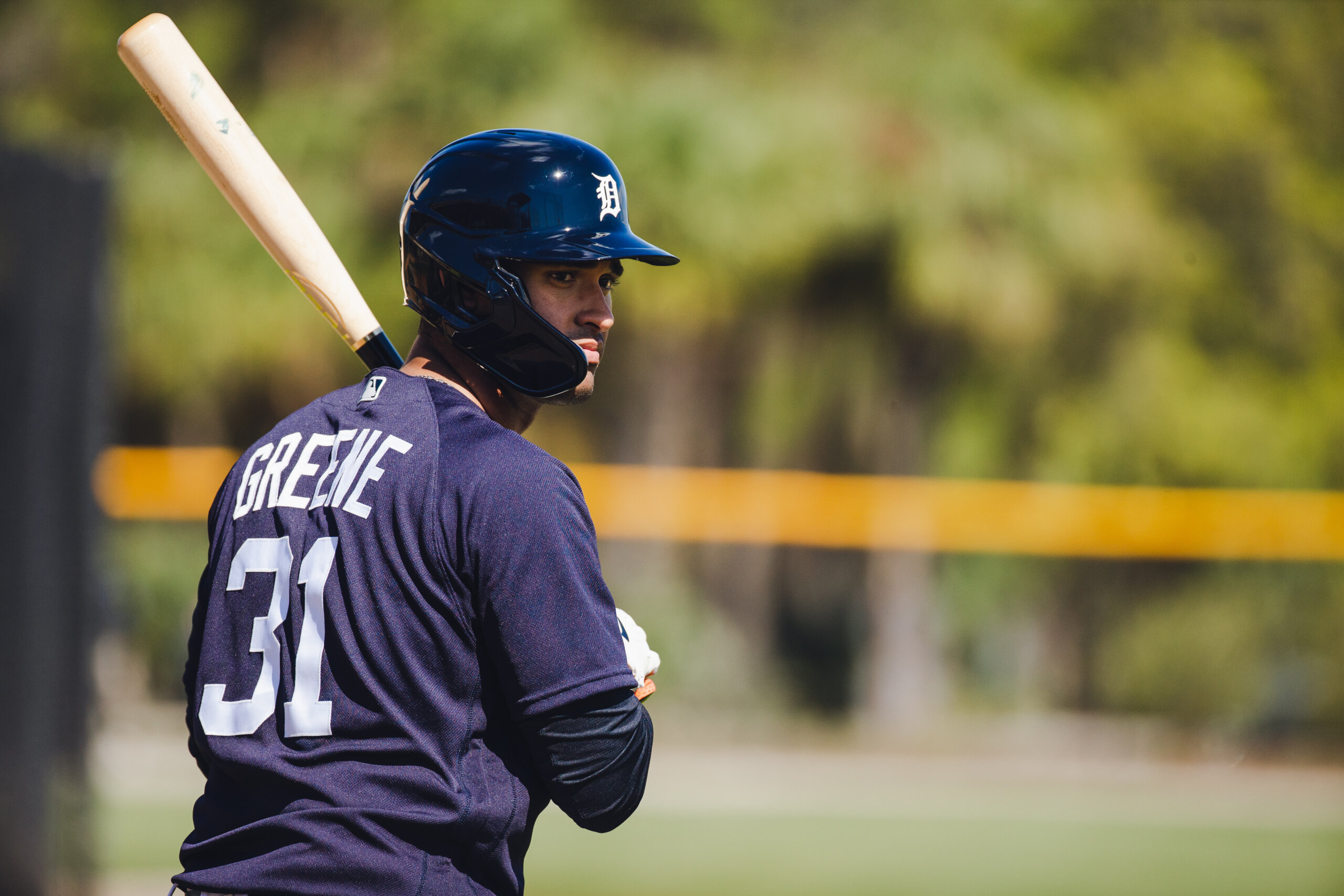 Riley Greene is working his way toward his eventual ascent to the Tigers. (Allison Farrand / Detroit Tigers)

on the road back

Riley Greene began his minor-league rehab assignment over the weekend, and it’s undoubtedly the most encouraging storyline around the Tigers right now. It would be easy to paint it as Detroit’s next great hope, the debut of a star prospect, the type of talent who could lift the spirits of a struggling team and help change the course of the franchise.

Of course, that’s the problem with hope. It comes with expectations, and expectations are rarely fair.

Greene, though, is the type of prospect worth being excited about. He has done nothing but impress since the day he was drafted. He seems to have that certain touch of magic that great players have.

But the excitement around Greene has put Hinch in a difficult spot this week. He has tried to downplay the narrative of Greene as a savior. That’s too much pressure on Greene, and even though Greene’s eventual ascent to Detroit is inevitable, Hinch still has a clubhouse to manage. Greene joining the team means someone else is losing his job.

“We got 26 guys on this club trying to play,” Hinch said. “It’s important for the organization for the young players to play. It’s more important for us to focus up here and let him mend. When and if he’s ready to come, then great, just like any young prospect.”

Greene played two games at Low-A Lakeland over the weekend, going 2-for-6 with two RBIs, a walk and a stolen base. Greene will report to the Toledo Mud Hens and begin a rehab assignment there Monday. He will join infielder Ryan Kriedler, who recently began a rehab assignment shortly after hand surgery.

The Tigers haven’t given a clear timeline for how long Greene will stay in the minors. Some of it could be performance-based. But it’s quite possible Greene will be there a while, basically giving him a second spring training to regain his rhythm at the plate.

Greene can’t be expected to rescue the entire team. But here’s something to consider: As of this weekend, the Tigers rank 28th with -0.5 bWAR and 53 wRC+ from their center fielders.

Shane Bieber kept throwing his slider Saturday, and even when the pitch wasn’t at its best, the Tigers could not hit it. Bieber threw 36 sliders (38 percent of his total pitches) compared with only 34 fastballs. It brought to mind the exact point The Athletic’s Eno Sarris made last week in his story on the demise of “fastball counts.” Tigers outfielder Robbie Grossman even referenced the article in his postgame interview.

“There is (a fastball count),” Grossman said the next morning. “It’s the first pitch of the game and 3-0. That’s the only fastball counts.”

This has been a growing trend for years. Teams seek to accrue and harness pitchers with velocity and spin. Pitchers are throwing an increased number of breaking pitches largely because the analytics suggest that’s the best way to get outs. The Rays are throwing fastballs only 37.5 percent of the time.

And the law of diminishing returns has not applied quite as much as you might think. Breaking balls can become less effective the more they are used. But it’s not like sitting on sliders is a foolproof solution for hitters.

“You can’t because guys are throwing 100 mph,” Grossman said. “Five years ago you might get one or two guys out of the pen. Now you’re seeing that every night. It changes every year. That’s why it’s hard to look back and be like, ‘The game is not that much different than it was 30 years ago.’ It’s completely different.”

Grossman might be struggling this year, but he’s still an exceptionally knowledgeable hitter who has brought a throwback style to the most modern advances in hitting philosophy. Those changes in philosophy — pulling the ball, creating launch angle and going for power — are only a response to other evolutions in the game. It’s survival of the fittest, and the Tigers are on board with the rise of the breaking ball.

Although the Tigers have the fourth-highest fastball usage in the league at 53.1 percent, Tarik Skubal, Michael Fulmer, Lange and others are power pitchers who now use their breaking balls almost as much as, if not more than, their fastballs.

“It’s to the point now where guys are throwing 100 (mph), and they’re scared to throw a hundred because they have a better chance of getting an out with an offspeed pitch,” Grossman said. “It’s pretty crazy. If you would have told someone that 20 years ago, they would have laughed at you.”

Among a long list of struggling Tigers, one hitter has fallen out of the spotlight. Eric Haase began the year slated to fill a utility role: catcher, left field, maybe even first base.

The plans to play Haase in the outfield became more limited once the Tigers acquired Austin Meadows and when the Tigers started playing Willi Castro in left. That Haase entered Monday hitting only .176 has not helped his case for playing time. But Haase has also struggled to get going because his playing time has been sporadic. He has started on consecutive days only once so far in May.

Here’s another hard truth: Haase’s struggles are not new. He struggled to the finish line last season after his scorching hot midsummer.

But since Aug. 1, 2021, Haase is hitting .198 with six home runs in 212 at-bats. Still, it sounds as though the Tigers hope to start giving Haase more playing time before giving up.

“Another one of our guys who has swung around the margins of the strike zone and hasn’t had a ton to show for it,” Hinch said. “He’s been a streaky hitter in the past. We sure would like him to catch fire a little bit and hit the ball a little harder and a little more often. He’s very hard on himself, and he wants to do well. Hopefully, I’ll sprinkle in a little bit more playing time for him as these games are starting to pile up.”

• Alex Faedo has gone at least five innings and allowed no more than two runs in each of his first five MLB outings. The last major leaguer to begin a career with such a streak was Steven Matz in 2015.

• The Tigers could probably sell tickets to the ping-pong games that have been going on between Fulmer and Spencer Torkelson inside the clubhouse. They’re developing a bit of a friendly rivalry. Both are good players, and the games get intense. Entertaining to watch on days when not much else is going on in the clubhouse.

• One nugget to remember: Jake Rogers caught Tyler Alexander’s recent live batting practice session in Lakeland. Rogers seems to be doing well in his Tommy John surgery rehab. There’s even hope the young catcher could be playing in games before the end of this season.