In the 19th century, this ambitious American lived several lifetimes, including as a peddler, politician, publisher and even, albeit briefly, a U.S. diplomat. 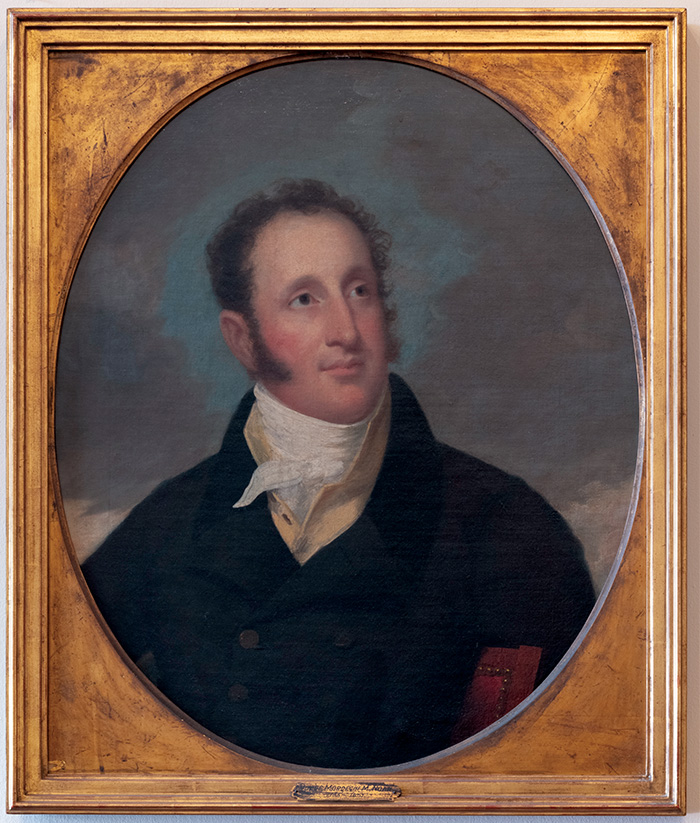 In August 1810, a 25-year-old American Jew named Mordecai Manuel Noah, then traveling about as a peddler in upstate New York, wrote to U.S. Secretary of State Robert Smith seeking an appointment. He was interested in being a consular agent in Lower Canada to protect the interests of U.S. citizens trading in the area. The letter was accompanied by a petition in favor of the appointment addressed to President James Madison and signed by 27 U.S. citizens. Secretary Smith turned Noah down, but advised him to seek a consular post in Europe.

On April 2, 1811, Smith was replaced by James Monroe, and Noah returned to the charge, writing to Secretary of State Monroe that his appointment to a post would “prove to foreign powers that our government is not regulated in the appointment of their officers by religious distinction,” thus stressing his religious identity for advantage. His quest was successful, and on June 4, 1811, he was offered the new post of consul to Riga (Latvia), then part of the Russian Empire.

Noah accepted the post and was confirmed, but he delayed departure until, with the start of the War of 1812, he was unable to travel to Riga. By then he had moved to Charleston and become involved in politics. During the 1812 presidential campaign, he strongly supported in newspaper articles the re-election of James Madison and the War of 1812 against the United Kingdom.

Noah then traveled to Washington to lobby President Madison directly, and in March 1813, he was appointed consul to Tunis; but before going to his post, Noah was entrusted with a sensitive secret mission, outlined in the instructions Secretary Monroe gave him on April 13. He was to attempt ransoming 11 American captives enslaved by the ruler of Algiers for a maximum price of $3,000 per person. Monroe’s papers in the Library of Congress document that Monroe had instructed Noah to “for obvious reasons, not let [the attempt] be understood as proceeding from [the U.S.] government, but rather from the friends of the parties themselves.”

Paying ransom to free U.S. prisoners from the Barbary States was not new for the United States. George Washington, John Adams and Thomas Jefferson had ransomed captives, made treaties with the Barbary States and paid yearly tributes. Like European states involved in seaborne commerce in the Mediterranean, they felt that paying for the treaties and other costs was still cheaper than building warships, running a naval establishment and paying increased insurance charges on cargo. The issue, however, had continued to fester, and during President Jefferson’s tenure had led to the First Barbary War (1801-1805), principally against Tripoli, which the United States Navy won.

In July 1812, after the war against Great Britain and Spain had begun, the United States was still paying a yearly tribute to the Dey of Algiers, who complained that the United States still owed him $27,000, and threatened that unless paid he would enslave all Americans in the country. U.S. Consul General Tobias Lear (1762-1816) borrowed the money and paid the dey, but was still expelled, with all Americans, from the country.

Then, on Aug. 25, the Algerians seized the U.S. merchant brig Edwin on the high seas, took the cargo and enslaved the crew of 11, soon joined by another American, taken from a Spanish ship.

Meanwhile, in May 1813, Noah embarked for the Mediterranean, but his ship was intercepted by the British Royal Navy, and he ended up in England for nine weeks. He then left for Cadiz, Spain, where he began to work on his secret mission.

There, he was not very circumspect. He revealed his purpose to U.S. Consul Richard S. Hackley (1770-1829), a businessman with intimate ties to the Spanish government nobility, and sought Hackley’s advice on whom to recruit to negotiate with the Algerian ruler. Hackley recommended a man of dubious integrity, as perhaps Hackley, himself, was. (In fact, as it turned out, Hackley later obtained title to most of the Florida peninsula, then a Spanish possession, from the Duke of Alagón, an adviser to the king of Spain. After the U.S. had purchased Florida from Spain, Hackley and his heirs spent years in court trying unsuccessfully to enforce their claim.)

The person Hackley recommended to Noah was Richard Raynal Keene (1779-1839), a lawyer who had been employed in the office of Maryland’s attorney general and former delegate to the U.S. Constitutional Convention Luther Martin (1748-1826). Keene had eloped with his employer’s 15-year-old daughter, Eleonora Martin (1786-1807), and subsequently moved to New Orleans. In New Orleans, he was involved in the Aaron Burr conspiracy, and was accused of trying to acquire land grants in Spanish Florida and of fomenting hostilities between Spain and the United States.

Keene, who was clearly a self-aggrandizing, untrustworthy schemer, had later moved to Spain and become a Spanish subject. Noah, unwisely, struck a deal with Keene, making him his front man: Keene would get paid $1,000 for his work, regardless of success, and $3,000 if he succeeded in freeing the prisoners.

Paying ransom to free U.S. prisoners from the Barbary States was not new for the United States.

Keene arrived in Algiers in February 1814, met with the dey and disclosed that he was acting on behalf of the U.S. government. The dey was totally unresponsive and declined to negotiate at any price. Then Keene turned to the British consul (Britain was then at war with the United States), who ransomed two American sailors, claiming that they were British, and four other seamen who claimed to be from Louisiana. Keene paid the British consul $10,000 and in May 1814, unable to secure the release of the other 10 sailors, returned to Spain to report to Noah. Keene gave Noah a bill for $15,852, claiming he had paid $12,000 to the British, plus his expenses of $3,852. Noah paid him and billed the State Department $25,910, which included passage back home for the freed sailors and interest paid on the funds he had borrowed to pay expenses. The State Department rejected the claim.

Noah then left Cadiz for Paris; he did not arrive in Tunis to take up his post until December 1814. He did not do too well. In the few short months he was there, he got involved in several disputes with the authorities, engaged in private business activities and expended official funds to lead a life of luxury, residing, as he admitted, in “one of the best and largest [houses] in Tunis.”

Secretary Monroe and President Madison learned of how Noah had apparently botched the special mission, contravened his instructions and expended funds for sailors who may not have been Americans, from former Consul General Tobias Lear. Lear had received a letter to that effect from the Swedish consul in Tunis. Another letter sent to the State Department by the captain of the Edwin, still in captivity in Algiers, corroborated Lear’s report. The president and Secretary were incensed and decided that Noah ought to be relieved of his post.

In early 1815, the War of 1812 ended with the Treaty of Ghent, and on March 2, 1815, the U.S. declared war on Algiers. Two warship squadrons were readied to sail to the Mediterranean, and one of these, under the command of Captain Stephen Decatur, left New York on May 20. Decatur was successful in his mission. He sailed into Algiers’ harbor, obtained the release of all Americans without ransom and negotiated a favorable peace treaty.

Decatur had also carried a letter from Secretary Monroe, which he delivered to Noah. Since the copy in the State Department archives has disappeared, we have to rely on Noah’s transcription and publication in his book Travels in England, France, Spain, and the Barbary States for its contents: “At the time of your appointment, as Consul at Tunis, it was not known that the Religion which you profess would form any obstacle to the exercise of your Consular functions. Recent information, however, on which entire reliance may be placed, proves that it would produce a very unfavourable effect. In consequence of which, the President has deemed it expedient to revoke your commission.”

Thus, ostensibly, Noah had been given the post in the first place in part for being a Jew and was now being fired for being a Jew. This did not make sense, and Secretary Monroe disclosed the real reasons to Noah in Washington in early 1816.

According to Noah, he was told that he had been relieved, among other reasons, for “going beyond orders, employing a most obnoxious character [Keene], expending the public money unnecessarily.” What was left unsaid at the interview was the fact that both Madison and Monroe had been upset that Noah had disclosed the involvement of the government in the ransom efforts, engaged in private business and was suspected of collaborating with Keene in his efforts to obtain land grants in Florida.

Noah did not take his firing kindly. He wrote a 128-page pamphlet, Correspondence and Documents Relative to the Attempt to Negotiate for the Release of the American Captives at Algiers; Including Remarks on Our Relations with That Regency, which he sent Monroe, telling him he intended to give it to Congress. Monroe was not concerned, but Noah’s friends dissuaded him from publishing the document because it could harm U.S. foreign relations and could also be taken as a personal attack on Monroe, then running for president.

Noah, however, pursued a claim for his salary, and eventually he was paid. He continued to clamor for a retraction of the charge that he had been fired because of his religious beliefs. In May 1818, he wrote to Madison: “I could wish, not only for the Sake of my Coreligionaires, but for that of your administration, that if my letter of recall, cannot be erased from the Books of the Department of State, that Such explanations may be Subjoined, as may prevent any evils arising from the precedent.” On May 18, 1818, Madison replied in a very carefully worded letter: “It is certain that your religious profession was well known at the time you recd. your Commission; and that in itself it could not be a motive for your recall.”

Although his short diplomatic career had been unsuccessful, Noah continued to be a wheeler-dealer and a man of some importance. He moved to New York, founded and edited a number of publications and wrote plays. He attempted in 1825 to found a Jewish “refuge” on Grand Island in the Niagara River, was sheriff of New York, and led New York City’s Tammany Hall political machine for several years. He died in New York in 1851 at the age of 65.

Luciano Mangiafico, an FSO from 1970 to 1991, is the author of two books, Contemporary American Immigrants (Praeger, 1988) and Italy’s Most Wanted (Potomac Books, 2007). He has also contributed articles to The Foreign Service Journal and the literary journal Open Letters Monthly, among other periodicals. To mark International Plasma Awareness Week (October 3-7), we’re sharing this story of a CSL Plasma employee who has a...

The hopes of the Sacramento Kings ending their 16-year playoff drought rely heavily on De’Aaron Fox consistently playing like the...

Nick Robertson was supposed to spend his 21st birthday last month watching the Detroit Lions open their season at Ford...