“I understand that many are frustrated that the process relating to the issuance of Maryland’s mobile sports wagering licenses has been time-consuming,” said Brandt, the panel’s chair Thursday. “I also want everyone to know that SWARC and its support team have been operating as diligently and deliberately as we can under the Maryland sports wagering law that we’re tasked to administer.”

Brandt’s comments came one day after Hogan (R) demanded that the commission “immediately accelerate and intensify” its efforts to grant mobile licenses. The governor said residents are “frustrated” that neighboring states allow bettors to place wagers on their electronic devices but Maryland does not. He called on the panel to have mobile betting operational by early September, when the NFL season kicks off.

“With only five physical locations in the state currently accepting sports wagers, Maryland is losing tens of millions of dollars in economic investment and education revenue that should be going toward our public schools and students,” the governor wrote in a June 14 letter. “The time for deliberation has passed.”

Speaking at the start of SWARC’s monthly meeting Thursday, Brandt called Maryland’s new sports wagering law “particularly complex, because — unlike any other jurisdiction — there is significant, deliberate effort to enable small business, minority-owned businesses to have equity positions and to participate in the growth of the new sports wagering industry.”

Hogan urged the commission to ‘prioritize’ awarding mobile licenses to the casinos, horse tracks and sports teams identified in legislation approved by the General Assembly. He also sought a “firm and transparent timeline” for the launch of mobile wagering as well as an expedited process which would allow “experienced gaming operators that are already licensed for mobile wagering in numerous other states” to begin accepting bets in Maryland.

(Giant national firms such as FanDuel, Draft Kings and Points Bet operate in most of the states where sports betting is legal, but not here.)

The commission did not publicly consider those requests on Thursday. But it did adopt a Hogan request that it release both the draft version of the lengthy application that companies will be required to fill out, and the regulations that will govern e-betting here. Brandt said he will ask the commission to release draft information “in the next few weeks.”

“We’ve seen firsthand that some people are unprepared for how in-depth our investigations are, and it can delay their licensing submissions,” he said. 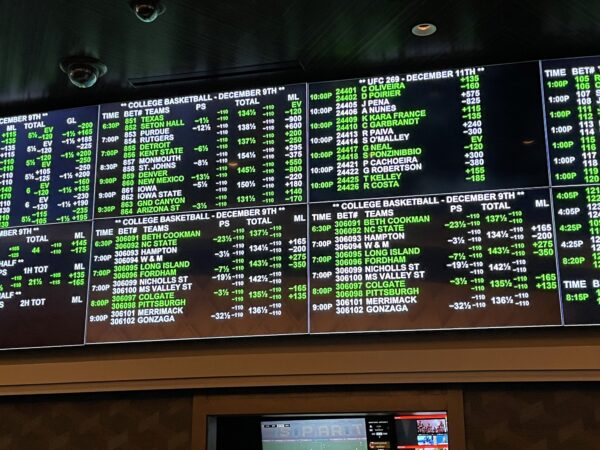 Screens at BetMGM Sportsbook in National Harbor in December display odds on dozens on sporting events. Photo by Bruce DePuyt.

John A. Martin, the agency’s director, conceded in an interview that bettors are unlikely to have access to mobile wagering platforms by the start of the NFL season. “September is very ambitious,” which, he said, is why they are opening the e-licensing portal Friday.

One national betting site characterized Maryland’s delay in getting mobile betting launched as the “longest” in the nation. That distinction seems unlikely to change.

Five casinos currently offer on-site sports wagering in Maryland. Three off-track betting venues and a bingo facility have been awarded licenses and are in the process of ramping up their operations, including “controlled demonstrations” that are required before they are permitted to launch.

Laura Gamble, a member of the commission, asked Brandt if he intended to reply to Hogan’s letter in writing. He said no.

“Because this is a public meeting and everything else we do seems to get communicated, my assumption was that [my opening statement] served as a sufficient ‘for the record,’” Brandt said. “Lots of other folks were listening to us today as well.”