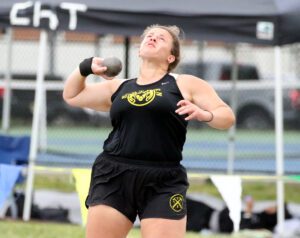 FINAL GO: Southern Regional senior Kelly Enterline heaves the shot put during the NJSIAA Meet of Champions on the way to an eighth-place finish. Enterline placed fourth in the discus. (Photos by David Biggy)

In the fall, Kelly Enterline will begin a whole new experience called Division I athletics, specifically throwing for the women’s track and field team at Rutgers University.

“It’s going to be a big change,” the Southern Regional senior said following a two-medal performance at the NJSIAA Meet of Champions on June 18, three days after graduation. “But I’ll have more opportunities to throw, and I’ll probably dabble in the hammer a little. I’ll try that and see where it takes me.”

Throwing the discus this past Saturday at cool and windy Franklin High School was a bit of a chore, but Enterline capped her outstanding career with a personal-best throw of 140 feet, 2 inches – more than 12 feet farther than her qualifying distance of 128 feet during the Group IV meet a week earlier – to place fourth in the state.

“Last year, I didn’t even make it to the Meet of Champions for disc,” she said. “I wasn’t even close. Today … I don’t know how I threw the disc that far. It was just one of those things where you just get off one really good throw, and it just happened to go 140.”

Union Catholic’s Jada Mia Puryear ended up as the state champ with a high mark of 155 feet, 7 inches, followed by Northern Valley-Demarest’s Casey Sullivan (144 feet) and Sarah Slowikowski (141-3). Ridge’s Sara Sahadi, who finished behind Enterline at the group meet, was right behind her again at 134 feet, 5 inches, and Pitman’s Catriona Galvin placed sixth at 130-1.

Later in the day, Enterline wrapped up her career in the shot put by placing eighth at 40 feet. Sullivan won the shot put state title with a top throw of 42 feet, 1½ inches, while Columbia’s Madison Stevens, who didn’t reach 40 feet during her qualifier the week before, finished as the state runner-up at 41 feet, 8 inches, and Livingston freshman Jessica Oji, who edged Enterline at the Group IV competition, took third at 41-7.

“At last year’s Meet of Champions, I threw 34-35 in the shot, so every improvement this season was a blessing,” said a teary-eyed Enterline. “I’m not unhappy with the marks today. I’ve had great improvement all season. It’s just my last meet in high school, and now reality hits. I’m very happy with my career. This year I improved by so much, and it’s great to cap such an incredible four years with two medals at the Meet of Champions.” 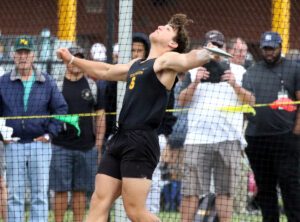 FLING IT: Southern junior Fabian Gonzalez releases his second throw during the preliminary round of the discus at the NJSIAA Meet of Champions on June 18 at Franklin High School.

Meanwhile, Fabian Gonzalez didn’t have the day he was hoping for, as the Southern junior finished seventh in the discus and 10th in the shot put.

“I didn’t perform the way I should have,” a dejected Gonzalez said after the discus results were announced by the main official at the discus circle. “It was a favorable wind for righties, so it was a bit of a disadvantage for me. It was an awesome competition, and I just didn’t get to where I wanted to be today. I didn’t do what I wanted to do, but it is what it is. I’ll rest up and get back to work.”

Not only was the wind at Franklin a stiff one from the north, cutting right to left against a left-handed thrower while the right-handers had more opportunity for their discs to carry down the left side of the sector if thrown well enough, but Gonzalez also was more overworked than usual – this past weekend he was splitting time with the New Balance Nationals in Philadelphia, and Friday’s weather was really hot and humid.

“It was hot yesterday, and my body’s a little burnt out,” he said. “But in the end, I have to be able to come back and do what I should do, and I didn’t.”

The defending state champ in the discus, Gonzalez reached his high mark of 183 feet, 10 inches during the preliminary round, when he sandwiched that mark between throws of 180 and 181 feet. In the finals, his three throws fell significantly short of 180 feet while the top five finishers each registered throws much higher than their qualifying marks from the group meets a week earlier.

A short distance in front of Gonzalez were Christian Brothers Academy’s Tyler Mayerhoff (186-4), who was second to Gonzalez by 21 feet at the Shore Conference Championships last month, and Bergen Catholic freshman Benjamin Shue (186-3), who had the highest-seeded mark of 198-5 from the previous week.

Licata won the shot put title at 64 feet, 8 inches, followed by Delsea’s Jason Nwosu at 62-7½ and Shue at 60-0½. Southern senior Jaiden Brown’s career culminated with a ninth-place finish, topping out at 53 feet, 8¾ inches, while Gonzalez was right behind him at 53 feet, 5¼ inches.

Southern’s 4×100 boys relay squad of seniors Jordan Rife, Taner Drexler and John Bruther, along with freshman Cole Cramer, also grabbed a Meet of Champions medal by placing seventh with a time of 43.62 seconds, which tied North Hunterdon and ended up being .14 behind Willingboro and .38 behind Mount Olive. Next post Sports betting in Florida: Has it been legalized, how to bet online, where to get picks, new promos