Diontae Johnson enters a contract year with the Steelers after experiencing three seasons of success to date. Johnson has led the team in receiving yards in each of the past two regular seasons. In his rookie season of 2019, Johnson finished second in receiving yards to James Washington.

Johnson will enter the 2022 season as the Steelers’ number one receiver in hopes of a new contract. Now let’s take a closer look at where Johnson finds success within his route tree during his career.

Including postseason games, Johnson has been targeted 417 times. As you’ll see below, there are seven main routes which make up nearly 80% of his total targets – Slant, Hitch, Crossing, Out, Go, Wide Screen & In. 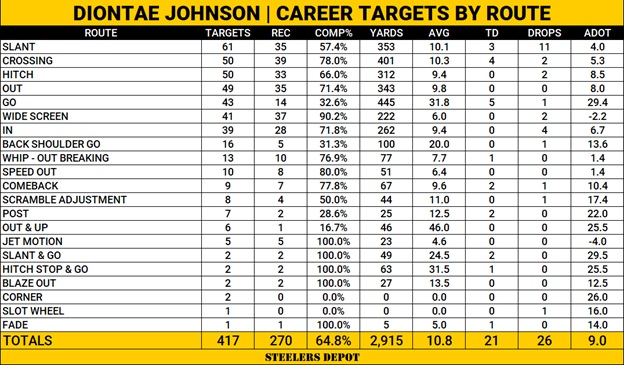 What’s also noteworthy on those main routes is the average depth of target for each. Except for the Go route, Johnson’s most popular routes are not reaching downfield regarding targets.

The Slant route is the most frequently targeted route for Johnson. Since 2019 there have been 40 WR’s with at least 25 targeted Slant routes and Johnson ranks last among them with a 4.0 ADOT. His 11 drops are the most among all receivers since entering the league.

The Crossing route is tied as the second-highest targeted route and his 5.3 ADOT also ranks last among 53 WR’s with at least 25 targets.

Last season alone, Johnson was one of 37 WR’s with 100+ targets. Including playoffs, his 8.9 ADOT ranked 29th among the group. One interesting note among the group as well, Johnson lined up as a slot receiver on only 7% of his overall passing snaps. Every wide receiver besides one (Deebo Samuel; 30%) lined up in the slot over 60% of passing snaps.

Also, since entering the league, Johnson’s overall 9.0 ADOT ranks 85th among 108 total WR’s with a minimum of 100 targets. Which begs the question is Johnson not effective on downfield routes?

Listed below are his targets on routes 10 or more yards downfield. As you can see, the majority of his TD’s are when targeted at this depth or longer.

The Go route has produced five TD’s for Johnson during his career with just one drop. This is not to say all 43 targets were catchable. It does however help paint a better picture of how effective he is downfield.

Once again, nearly half of Johnson’s overall drops are on Slant routes. Perhaps the product of short, quick throws, as covered in a recent study. Also revisited below in terms of where Ben Roethlisberger ranked in average time to throw and ADOT during his last three full seasons.

Considering how low Roethlisberger’s ADOT has been on pass attempts these past two seasons, Johnson’s average of 9.0 is a tad higher. But still pales in comparison to many other WR’s.

A new era of QB play is now being ushered in though. Recent comments from fellow WR Chase Claypool during OTA’s makes one wonder if the Steelers’ passing attack will look downfield more this season.

Claypool on 2022 team: “A lot of new or super young, which is super exciting as well. You know we have a new playbook in a sense with (offensive coordinator) Coach (Matt) Canada now that he has fully implemented his game plan, so I think we’re having some fun out here.” #Steelers

The meaning behind Claypool’s comments of “exciting” and “fun” is up for debate. Many components of the passing playbook will most likely change. Especially due to the arrival of free agent Mitch Trubisky and draft selection Kenny Pickett. If Claypool’s comments translate to more targeted routes downfield, then expect to see Diontae Johnson possibly having a career season – at least by average depth of target standards.