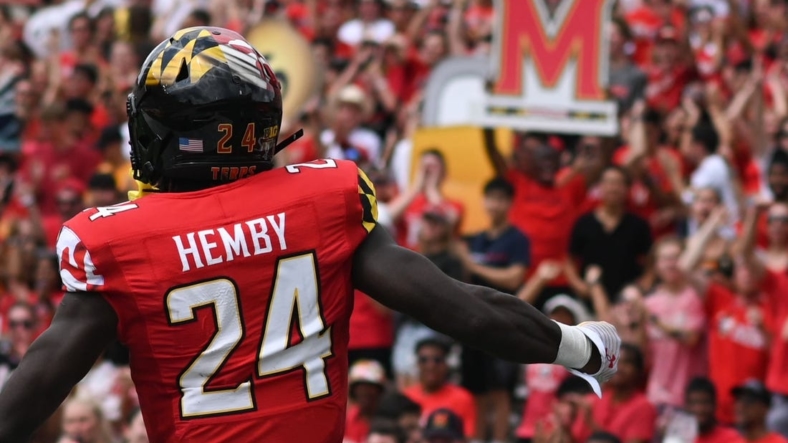 Roman Hemby had long touchdown runs on Maryland’s opening possession of each half as the Terrapins cruised to a 31-10 win over Buffalo on Saturday in College Park, Md.

Taulia Tagovailoa completed 24 of 34 passes for 290 yards and a slimmed-down Antwain Littleton added two touchdown runs as Maryland led all the way in the first-ever meeting of the teams.

The game was the season opener for both.

Hemby, who rushed for 71 yards all of last season as a freshman, finished with 114 yards on seven carries.

On the Terps’ fifth snap of the afternoon, Hemby got Maryland off to a quick start with a 33-yard touchdown carry on a misdirection play for a 7-0 lead.

Then, on Maryland’s second play of the second half, Hemby bolted through a big hole off left tackle and broke into the clear on a 70-yard touchdown sprint for a 24-7 lead.

From there, Maryland relied on its defense as Buffalo gained just one first down on its next four possessions. Henry Chibueze had a pair of sacks and Jakorian Bennett broke up five passes to lead the Terps’ defense.

In his first career start after three seasons at Rutgers, Cole Snyder completed 18 of 35 passes for 160 yards for Buffalo.

In the second quarter, a sack of Snyder by Maryland’s Mosiah Nasili-Kite backed the Bulls up 11 yards and forced a punt, helping set up the Terps’ second touchdown on a drive of just 31 yards.

The 235-pound Littleton, who has dropped 50 pounds since last season, rumbled for 21 yards to set up his own 2-yard scoring carry for a 14-0 lead.

Chad Ryland followed with a 45-yard field goal, extending his nation-high streak of makes to 18, which dates to last season at Eastern Michigan.

Al-Jay Henderson carried 19 yards for Buffalo’s lone touchdown late in the first half.