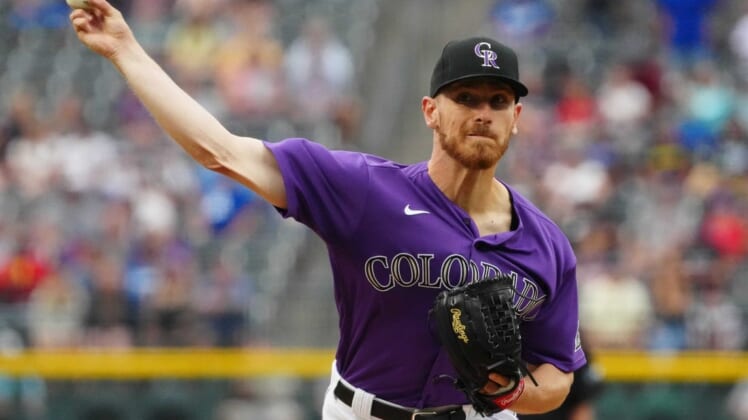 Chad Kuhl pitched the first shutout and first complete game of his career, scattering three hits as the Colorado Rockies beat the Los Angeles Dodgers 4-0 on Monday in Denver.

Kuhl (5-5) kept the Dodgers off balance all night while striking out five without walking a batter in a 102-pitch effort.

Jose Iglesias homered and Randal Grichuk, Brendan Rodgers and Connor Joe finished with two hits each for Colorado, which welcomed Kris Bryant back to the lineup for the first time since May 22.

Bryant, who returned from a back ailment, went 1-for-4 with a single but remains without a home run in 18 games this season.

Gavin Lux had two hits and Tyler Anderson (8-1) took his first loss as a member of the Dodgers. The left-hander threw six solid innings, allowing four runs on 10 hits and a walk while striking out two.

Colorado touched him up for a couple of early runs on Monday. Joe led off the bottom of the first with a grounder up the middle, and he legged it out for a double. He moved to third on Bryant’s flyout to right and scored on C.J. Cron’s line-drive single.

The Rockies doubled the lead in the second inning when Grichuk hit a two-out double and scored on a single by Elias Diaz.

Colorado stretched the advantage in the sixth inning when Rodgers led off with a single and Iglesias followed with his first home run of the season, a 432-foot shot into the seats in left.

The Rockies threatened for more in the inning. Grichuk hit a ground-rule double with one out but he was thrown out at second when he broke for third on a lineout by Diaz.

Los Angeles’ hits were a Lux single in the third inning, a Freddie Freeman single in the seventh and a Lux double leading off the ninth. Kuhl closed the game by striking out Trayce Thompson, getting Trea Turner to ground out and getting Freeman to line out.