“I don’t like the amount of money the state and the taxpayers are having to foot to bring the business here,” said Gail Wilson, a Rutledge resident who lives five miles from the nearly 2,000-acre site. “I don’t care how many jobs they’re saying they’ll bring.”

“I’m vested in the community, and I want it to have growth, but do it well,” he said.

Walton and Morgan counties, where the factory will be built, are part of Kemp’s rural conservative base. He won about three-quarters of the votes in the two counties in 2018. And big jobs deals tend to be amplified by politicians of all stripes when they seek re-election.

On Friday, Kemp and leaders of Hyundai Motor Group are expected to announce another huge EV plant in conservative Bryan County near Savannah.

But in the counties surrounding Rivian’s future Georgia home, some local politicians — and others running for statewide office — have decried Kemp’s handling of the project.

Some residents said they feel officials stepped over them when the state took over the plant site, bypassing local zoning boards.

The facility’s influence on local politics is evident in the races for the Morgan County Commission.

Blake McCormack, a Republican candidate for the District 2 seat, said he feels the project has been forced upon residents. He said officials who have called for limited government while allowing Rivian to skirt local zoning decisions and offering tax incentives are “speaking out of both sides of their mouth on this.”

His Republican primary opponent, Keith Wilson, said he’s most concerned that the local community is not equipped to support a project of this size.

Even the Democrat running in District 2, Bob Baldwin, complained the project was “ramrodded” through by state leaders.

Bill Dobbs, who serves on the board of the Newton County Industrial Development Authority, looks under the hood of a Rivian R1T with Rivian’s Charles Alexander at a community appreciation event hosted by the company on Saturday, May 14, 2022. 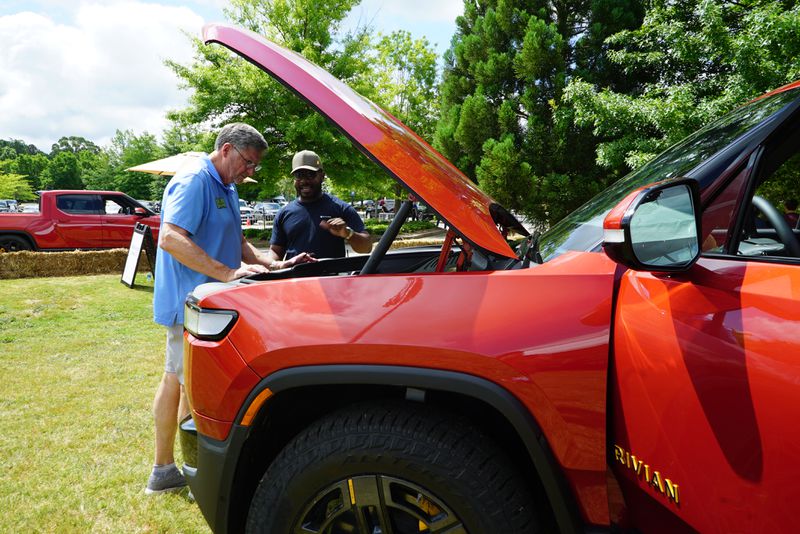 Bill Dobbs, who serves on the board of the Newton County Industrial Development Authority, looks under the hood of a Rivian R1T with Rivian’s Charles Alexander at a community appreciation event hosted by the company on Saturday, May 14, 2022.

R.J. Scaringe, Rivian’s founder and CEO, said in a recent interview that Rivian will protect the environment and be a good neighbor, but change triggered by the company’s campus may be inevitable.

“The plant will be very sustainable, the plant will protect groundwater, but it is going to employ a lot of people by definition,” he said.

‘Hold back the onslaught’

Kemp’s chief Republican rival, former U.S. Sen. David Perdue, has tried to use Rivian to peel off disgruntled voters by staging rallies in tiny Rutledge and slamming the project as an election-year giveaway during debates.

But his efforts to make the issue resonate with voters statewide haven’t shown much success as Perdue trails Kemp by double-digits in polls.

Perdue’s tactics also are at odds with the positions taken by past Republican and Democratic governors, who have long encouraged business development in the state, said University of Georgia political scientist Charles Bullock.

“All of this makes the position that David Perdue has taken with Rivian very much un-Republican,” Bullock said.

Though his stance on Rivian does not appear to be resonating statewide, it may be working to attract some voters living close to the future plant, like George and Penny West.

Penny and George West show off their anti-Rivian buttons outside their home near Madison. The couple says the future plant is the main issue they care about in the upcoming primary elections. 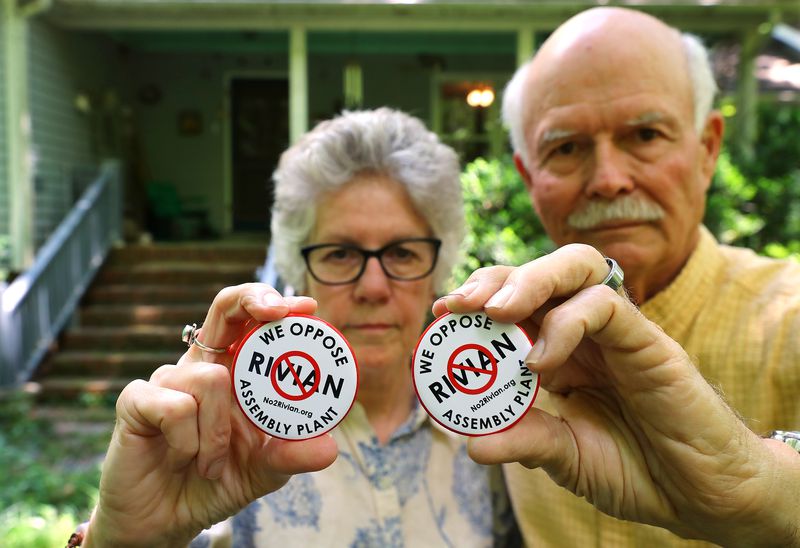 Penny and George West show off their anti-Rivian buttons outside their home near Madison. The couple says the future plant is the main issue they care about in the upcoming primary elections.

The Wests live in a modest blue house deep in the woods on land once part of a dairy farm owned by Penny’s father.

“There was always a strong effort by this county to be different … to try and hold back the onslaught from Atlanta,” George West said. “I mourn the loss of rural nature that this place is going to face and it irritates me that there are public officials who don’t seem to realize that, or don’t care.”

They say they “probably” voted for Kemp in 2018, but will vote for Perdue in the upcoming primary.

Pastor Lonnie Brown lives in Stone Mountain but preaches at two churches in Morgan County. He grew up roughly 15 miles from where Rivian will be located.

Brown said childhood friends left Morgan County for better jobs. He said he hopes the factory will give local kids a reason to stay.

A note of disclosure

Cox Enterprises, owner of The Atlanta Journal-Constitution, also owns about a 4% stake in Rivian and supplies services to the company. Sandy Schwartz, a Cox executive who oversees the AJC, is on Rivian’s board of directors and holds stock personally. He does not take part in the AJC’s coverage of Rivian.

Next post Work advice to help you succeed in your career