Andy Howard first met Gotham Chopra more than a decade ago, when their kids were in preschool together. That relationship led to a recent $50 million Series B funding round led by Shamrock Capital, where Howard is a partner in Chopra’s production company Religion of Sports, which was co-founded in 2017 with NFL legends Tom Brady and Michael Strahan.

Other investors in the round, which closed May 19, include Eldridge, the firm led by Todd Boehly, who recently purchased Premier League club Chelsea FC; Elysian Park Ventures, a fund founded by co-owners of the Los Angeles Dodgers, including Boehly and Mark Walter; and Cerro Capital, a sports-focused fund recently established by Andy Nestor, Ashish Patel and Thomas Rudy. 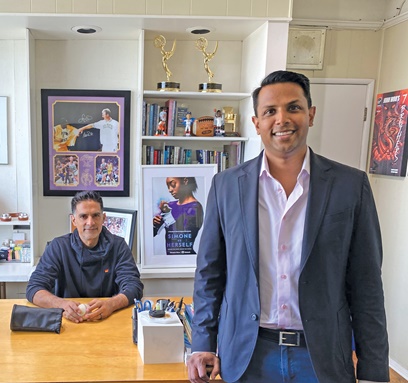 Shamrock Capital was eager to invest in a market leader. “Obviously there’s strong demand for premium, nonfiction content by consumers and streaming platforms alike, and Religion of Sports is at the forefront of such,” said Howard. “It’s a tremendous platform built on trust, collaboration and unique relationships.”

This latest funding round brings Religion of Sports to a total of $66 million raised across three rounds. Shari Redstone’s Advancit Capital led a $3 million venture round in 2018, and Elysian led a $13 million Series A in 2020. According to Religion of Sports CEO Ameeth Sankaran, the company’s 2022 revenue is up more than 50% year-over-year, with similar growth projected for 2023.

Sankaran said the capital injection will give Religion of Sports the ability to grow through acquisition. “There are a lot of companies in that zone, whether you talk about graphics companies, unscripted companies or companies like ours in different geographies,” said Sankaran. “They may not be as capitalized or have the right infrastructure, so it’s about finding ways to bring them aboard.”

Sankaran added that Religion of Sports will now be able to make greater investments into developing projects without first securing a distribution deal, allowing for additional creative freedom and a more compelling pitch to potential talent: “Forget about the network stuff, we’re just going to be your partner and we’re going to invest to create something great.”

Religion of Sports has established an early foothold thanks to critically acclaimed documentaries featuring stars like Brady, Simone Biles and Kobe Bryant, among others.

The company has 17 unscripted projects in development, most of them slated for a 2023 release, and has partnered on four features in its fledgling scripted vertical. Yet-to-be-announced upcoming projects involve former Olympian Alexi Pappas and comedian Trevor Noah, with distribution partners in Amazon, ESPN, Netflix and Showtime. “Man in the Arena,” the recent 10-part Tom Brady docuseries for ESPN+, just won the Sports Emmy for best documentary series. It’s the third win and sixth nomination for a Religion of Sports production.