Raheem Sterling says Chelsea have restored his happiness for football after he was left “fuming and raging” by how his Manchester City career ended.

Sterling completed a £47.5m move to Stamford Bridge in July after seven trophy-laden seasons in Manchester where he scored 131 goals in 339 appearances and won four Premier League titles, four League Cups, and one FA Cup.

In his final season at the Etihad Stadium, the 27-year-old England international featured 30 times in City’s title-winning campaign but just 23 of those were starts, leading Sterling to conclude his sacrifices were not being reciprocated.

“When you play your heart out, sacrifice some of your kids’ birthdays, and then get treated in a certain way, it’s disappointing.

“At the time I was fuming, raging, but it’s gone, it’s in the past and I can only focus on the present, which is now, here at Chelsea, and the opportunity I’ve got here to go out and showcase my talents once again.”

Pressed on the biggest factors behind his decision to trade Manchester City for Chelsea, Sterling said: “Misunderstandings, contracts running down. It was a shame to see how it ended in the end because I had such a great time there.

“A lot of things came into play, a lot of reasons, but I wasn’t complaining, I was ready to challenge and, as you can see, even with some of the performances I put in, you couldn’t guarantee yourself a place so it just didn’t make sense to fight a battle you can never win.”

Sterling: I’ve got my happiness back

Asked whether he had reached the point where, having given his all, his situation at Manchester City had become untenable and the time had come to leave, Sterling replied: “Yes, it was literally that.”

He continued: “As a player you always want to do your best and help your team, but when you don’t think things are going fairly, it’s always a disappointment. 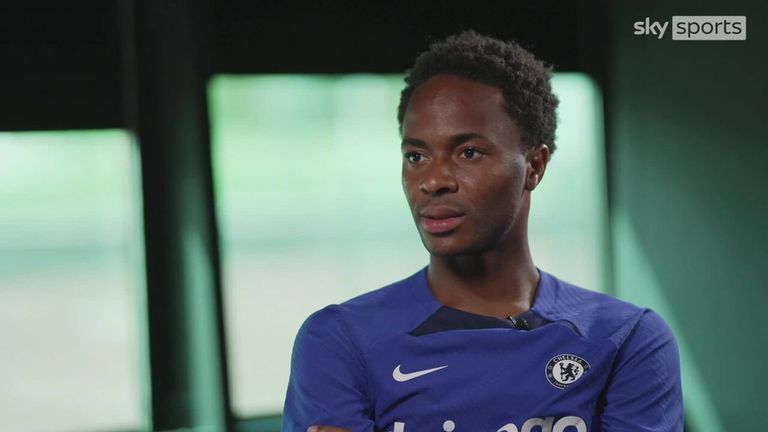 “If you are not happy playing your football you’ve got to look at other options to get that happiness back, and that’s exactly what I have done. It was the right time for me to move on. I wouldn’t stay part of something I knew I couldn’t give my all in.

“It [City] is a fantastic club, it’s a club that wins lots of trophies, it’s a club that has helped my development massively in the past couple of years, but there comes a time when you’ve got to think about yourself, what’s best for yourself, and what you want for the future. That’s the sole reason why I am here [at Chelsea].”

FREE TO WATCH: Highlights from the 2-2 draw between Chelsea and Tottenham in the Premier League

The switch to Chelsea saw Sterling become the first marquee signing of new owner Todd Boehly’s era at Stamford Bridge, and the forward revealed proof that the club were delivering on their promises convinced him they were the club for him.

“It was their intent, how they approached me,” Sterling explained. “I wasn’t listening to promises, I was seeing action and I think that was one of the factors that made me really consider the football club, the way they showed me how important a role I could have here.

“Looking back on what they have achieved here in the last couple of years, the finals they missed out on, the new owner taking over, it’s a team that is always competing on all fronts and I knew it would only get better. I didn’t need to make another choice.

“It was a possibility I wouldn’t let pass. It’s a blessing in disguise, it’s another challenge and a challenge I’ll look back on at the end of my career and know I stepped up to the plate and I can be happy with myself.

“The most part was just getting to play football week in, week out. It was the first time in my career experiencing that, it was kind of a shock, so I just wanted to get back playing and enjoying my football again. It was as simple as that, and I knew that once I could do that, I could be happy and show that on the field.”