Hours after LIV Golf announced on Monday that Mickelson would make his return to competition this week, Harig talked to Mickelson as he was headed to the London event.

Mickelson has been in a self-imposed exile since early February, after being quoted as making derogatory comments towards both the Saudi-backed LIV Golf series and the PGA Tour.

In his interview with Harig, Mickelson addressed a number of topics, from his status on Tour to his relationship with the Saudis. But it was his statements regarding his longtime gambling habit, when asked about being in dire straits financially, that most stood out.

“My gambling got to a point of being reckless and embarrassing. I had to address it. And I’ve been addressing it for a number of years. And for hundreds of hours of therapy. I feel good where I’m at there. My family and I are and have been financially secure for some time,” Mickelson told Harig.

“Gambling has been part of my life ever since I can remember. But about a decade ago is when I would say it became reckless. It’s embarrassing. I don’t like that people know. The fact is I’ve been dealing with it for some time. Amy has been very supportive of it and with me and the process. We’re at place after many years where I feel comfortable with where that is. It isn’t a threat to me or my financial security. It was just a number of poor decisions.’’

Mickelson added that there was a difference, to him, between gambling on the course and away from it.

“On the golf course, it’s creating competition. But it’s the anxiety, the other things that comes across with gambling off the course and addiction off the course that I really needed to address,” he said.

After playing in this week’s inaugural LIV Golf Invitational Series event, Mickelson said he plans on competing next week at The Country Club in Brookline, Massachusetts. 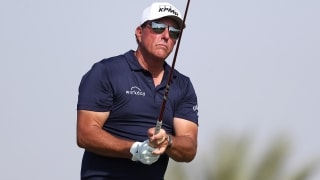 “I am looking forward to playing the U.S. Open and I’ll be there,” he said. “I’m under the understanding that I’m able to play.’’

The 51-year-old said that it was also his understanding that he could have played in the first two majors of the season, but that “I really needed some time away.” He said he watched both the Masters, which he’s won three times, and the PGA Championship, of which he was the defending champion.

As for his Tour status, Mickelson said he hopes to maintain his lifetime membership, which he earned thanks to his win total and service. He said that he hasn’t had any conversations with PGA Tour commissioner Jay Monahan, but has talked to officials among the organizations that run the four majors.

“I have not resigned my [PGA Tour] membership. I worked really hard to earn that lifetime membership. And I’m hopeful that I’ll have the ability to play wherever I want, where it’s the PGA Tour, LIV or wherever else I want,” he said.

That relationship with LIV Golf appeared to be strained when Mickelson was quoted in a Fire Pit Collective story earlier this year as saying, among other things, “[The Saudis are] scary motherf*****s to get involved with. We know they killed [Washington Post reporter and U.S. resident Jamal] Khashoggi and have a horrible record on human rights. They execute people over there for being gay. Knowing all of this, why would I even consider it? Because this is a once-in-a-lifetime opportunity to reshape how the PGA Tour operates.”

When asked by Haring how he can “square that relationship” between playing for a new league, but one that is backed by Saudi Arabia’s Public Investment Fund, Mickelson responded: “I certainly do not condone human rights violations. And addressing what happened to Jamal Khashoggi is awful. But I have seen the good that game of golf has done throughout history. And I really believe that LIV can be good for the game of golf as well.’’