Arsenal defender Pablo Mari was discharged from hospital on Sunday after undergoing surgery on Friday having been stabbed in a supermarket attack in Milan on Thursday.

Mari was among six people attacked at a shopping centre in the Italian city.

The 29-year-old, currently on a season-long loan at Monza, is now recovering having been released from hospital on Sunday, with local reports claiming one of six victims – said to be an employee of the supermarket – has died.

Milan’s Niguarda hospital said on Friday its trauma team had carried out surgery to reconstruct two injured muscles in Mari’s back. Surgeon Alberto Chiara revealed to Sky Italy the belly muscles were stitched back together and Mari can return to work in two months.

“I fear it’ll be three months before he can be back on the pitch as he can start training after two and put in a big effort as he makes progress,” Monza chief executive Andrea Galliani told Sky Italy. “In sporting terms, unfortunately it’ll be more than two months until he’s back on the pitch.

“What I’ve understood from the doctor is that if he hadn’t had strong muscles in his back, the knife probably would’ve gone in more deeply and he would’ve died. Being an athlete certainly helped him in terms of having strong muscles that stopped the knife.”

Quoted in Gazzetta dello Sport, Mari said: “I was lucky, because I saw a person die in front of me.”

He later said in an Instagram post: “After the hard moment we experienced yesterday, both my family and I want to communicate that fortunately we are all fine despite the circumstances, and we want to thank all the messages of support and affection that we are receiving.

“In addition, we want to send our condolences and all our strength to the family and friends of the deceased person, and we sincerely wish that all injured people recover as soon as possible.”

The Italian newspaper said that Mari had been walking with his wife and son – who was in a trolley – in the shop in Assago near Milan when he felt a pain in his back before seeing the attacker, later identified as a 46-year-old man and arrested by police, stab another person in the throat. Sky Italy report that investigators have ruled out terrorism. 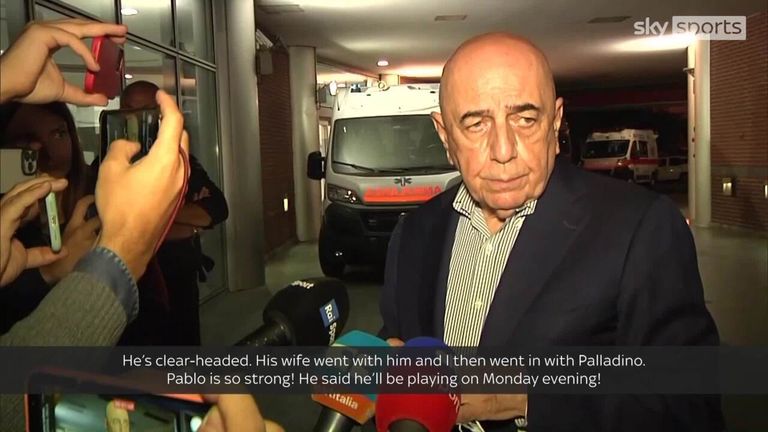 Adriano Galliani, CEO of Monza, told reporters Mari is recovering and wants to be back in training on Monday

“I know [club technical director] Edu has been in touch with his relatives,” said Arteta after Thursday’s 2-0 defeat at PSV Eindhoven in the Europa League.

“He is in hospital. He seems to be ok. I will get a briefing now about what happened.”

Arsenal issued a club statement on Thursday night: “We are all shocked to hear the dreadful news about the stabbing in Italy, which has put a number of people in hospital including our on-loan centre-back Pablo Mari.

“We have been in contact with Pablo’s agent who has told us he’s in hospital and is not seriously hurt.

“Our thoughts are with Pablo and the other victims of this dreadful incident.”

Monza chief executive Adriano Galliani has told Sky Italy Mari was stabbed in the back and had a “fairly deep wound”, but his injuries were not life-threatening.

Galliani said: “Pablo Mari had a fairly deep wound on his back, which fortunately did not touch vital organs such as the lungs or others.

“His life is not in danger, he should recover quickly.”

Galliani also told Sky Italy that Mari, who is 6ft 4ins, was “saved” due to his height, and confirmed Mari had his son in the shopping trolley.

“He told me about this incredible incident,” said Galliani. “He had his son in a trolley and his wife next to him. He didn’t notice anything. He then felt something painful in his back, which was the criminal’s knife.

“Unfortunately, he also saw the criminal stab someone in the throat. He saw everything that happened and it was deeply disturbing.”

Galliani later told Gazzetta dello Sport that Monza have asked for Monday’s Serie A game against Bologna to be postponed.