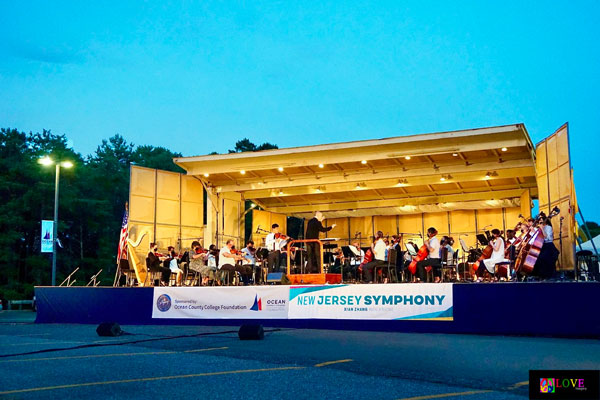 It’s a gorgeous June 28, 2022 summer evening on the campus of Toms River, NJ’s Ocean County College. Music lovers seated in lawn chairs and spread out on blankets dot the hillside above a portable stage as they wait for the start of a live “Summer Under the Stars” performance by the New Jersey Symphony Orchestra featuring the music of Mozart, Rossini, and Rogers and Hammerstein.

Before the show begins, we take a moment to chat with several members of the audience including a family from Toms River which includes three generations of music lovers. Reveals mom, Michele, “My daughter, Lucia, plays the cello in elementary school. We got here early to pick a spot by the cellos so she can watch them play.” Says Lucia about her choice of instrument, “I like the sound of it. It’s fun to play.” Michelle recalls, “We brought the family to see the NJSO here at Ocean County College last year,” to which grandmother Donna exclaims, “They were awesome! It was so good to be able to enjoy live music again!”

We also chat with Don from Barnegat who tells us, “We heard the New Jersey Symphony was going to perform at the college tonight and we had to come hear them,” explaining, “We’ve been fans ever since we saw them play the soundtrack to Star Wars live — it was just amazing how they were able to sync the live music to the movie.”

Ocean County College president Jon Larson welcomes the crowd to tonight’s “Summer Under the Stars” program on the OCC campus. After quoting Tolstoy — stating, “Music is magic with a melody” — Larsen announces that tonight’s concert will be led by conductor José Luis Domínguez and will also feature a performance by NJSO Youth Orchestra violinist Timothy Shi.

The orchestra tunes and the crowd rises for the playing of “The Star-Spangled Banner.” Audience members stand with their hands on their hearts as they sing along to the majestic sounds of the NJSO’s rendition of the national anthem.

On Rossini’s “Overture to The Barber of Seville,” strings play and bows bounce as woodwinds and brass call. The woodwinds dance along to the plucking of the cellos and basses and the long bowing of the violins and violas. Toes tap as audience members watch the talented NJSO musicians bring notes on the page to life with precision and artistic expression as the sound builds to a grand finale of cheers from the crowd. 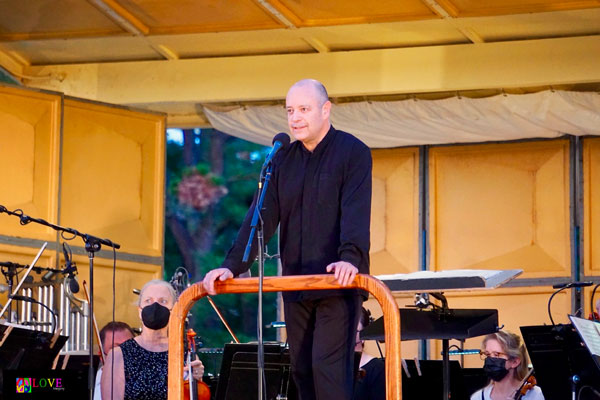 He introduces timpanist Gregory LaRosa who reminds the crowd that they “might have heard the first piece in the Bugs Bunny cartoon, The Rabbit of Seville,” before introducing tonight’s next selection, Florence Price’s “Juba Dance” from Symphony №1 in E Minor.

On this selection, the easy-flowing dance-like melody is played by the string, brass, and woodwind instruments as the percussion section adds its rhythmic voice under Domínguez’s dancing baton. 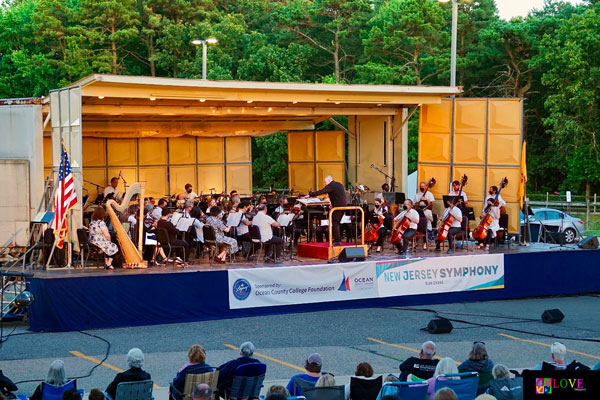 Austrian composer Franz von Suppé’s “Poet and Peasant Overture” is up next. Brass instruments lead the call as the rest of the orchestra members join in together. Harp and cello duet, sweetly and lyrically, before inviting the other sections to dance along with them. The mood changes as the music swells and wanes while the setting sun paints the sky with shades of pink, gray, and lavender.

Concertmaster Brennan Sweet tells the audience that the NJSO’s next selection was written in 1775 by Wolfgang Amadeus Mozart when he was only 19. Sweet introduces violin soloist Timothy Shi, who is the winner of the New Jersey Symphony Youth Orchestra’s 2022 Henry Lewis Concerto Competition.

The orchestra plays the familiar tune of Mozart’s “Allegro” from Violin Concerto №3 in G Major. As they perform, Shi makes his violin sing, his solo demonstrating his dexterity and skill as well as his musical intelligence. 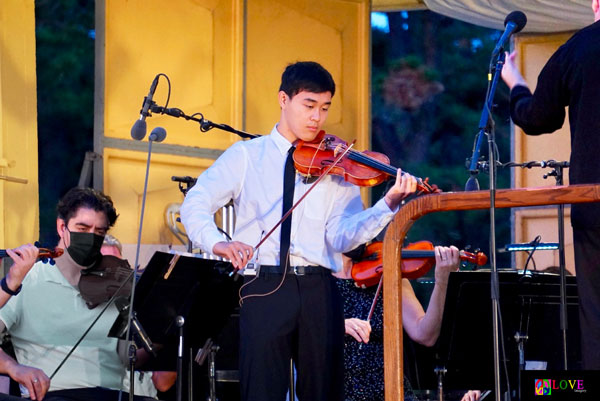 Orchestra members stamp their feet at the conclusion and the crowd applauds for Shi who takes a gracious bow.

During intermission, we chat with several music lovers in the audience who share their opinions of tonight’s presentation thus far. Exclaims Val from Brick, “Oh, my God — this concert is amazing!” adding, “As a kid growing up in the ’60s, I heard a lot of classical music watching cartoons, and tonight, I enjoyed hearing those familiar tunes played live. Seeing the musicians performing right in front of me added another dimension to the listening experience and gave me a new sense of appreciation for the music.”

Rocco from Jupiter, Florida acknowledges, “This is my first time seeing the New Jersey Symphony here at Ocean County College. It’s such a beautiful setting and the music is so exciting, I wish they could do this more than once a year.” Rocco’s daughter, Marcy from Bayville, agrees, adding, “It was so exciting hearing Timothy Shi perform tonight. He has so much talent!”

Next, we chat with Timothy Shi’s parents, Jin and Eric. Reveals Jin, “I was a little nervous for Timothy — he’s only 15 — but I think it’s great that he’s received so much encouragement from all of the symphony players. I thank the NJSO so much for this wonderful opportunity.” Dad Eric, concurs, joking, “As his parents, we’re not musical at all — I’m just the chauffeur — but we are both very proud of Timothy.”

Lastly, we chat with audience member Lee from Brick who comments, “Timothy Shi was just amazing — he has such poise,” before adding, “I love the New Jersey Symphony. We came to last year’s concert here and just had to come back again,” noting, “I can’t wait to hear them play selections from The Sound of Music in the second half as that’s something we can all use more of these days!”

Act II begins with “The Sound of Music: Selections for Orchestra” by Rogers and Hammerstein. Audience members sing and hum along on the opening strains of “The Sound of Music” as well as on other familiar tunes including “My Favorite Things,” “Doe a Deer,” “Edelweiss,” and “Climb Every Mountain.” 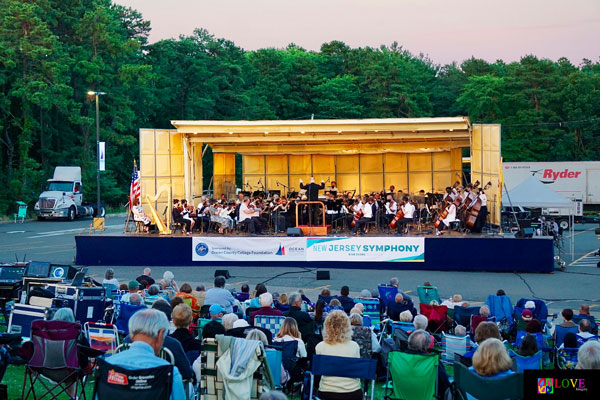 The audience cheers at the end as the orchestra stands and bows.

Following Johann Strauss’ Tritsch-Tratsch-Polka, a playful and lively piece filled with runs and swells, timpanist Gregory LaRosa introduces the next number, revealing that John Philip Sousa wrote it in 1927 for the “Atlantic City Pageant,” which was the original name of the Miss America contest. Toes tap in the audience to the infectious beat of Sousa’s “The Atlantic City Pageant March.”

A highlight of tonight’s program is the NJSO’s performance of Arturo Marquez’s “Danzon №2.” Syncopation dominates on this stirring composition where violinists strum their violins like guitars and cellists pluck their instruments to create a unique rhythmic sound. Soon, all the string players strum their instruments on this rhythmically and melodically complex piece. Concertmaster Brennan Sweet is featured on a violin solo as the music swells and fills the night air with a taste of Cuba. Audience members cheer for this impressive performance.

Sweet informs the audience that it’s been a tradition for the past 20 years for the NJSO to close their programs with their next selection. He invites all of the veterans in the audience to stand as their branch of the military is called during “Armed Forces Salute,” a piece which includes songs for the Army, Coast Guard, Marines, Air Force, and Navy. Audience members happily clap along and applaud for the men and women who have served our country.

Domínguez steps up to the mic to ask, “A little more?” and the crowd happily reacts with whistles and cheers. He and the NJSO conclude tonight’s concert with their rendition of John Philip Sousa’s “The Stars and Stripes Forever.” The audience claps along to the conductor’s cues before exploding into cheers and whistles for the NJSO musicians who take a bow to a well-earned standing ovation.

As audience members make their way out of the concert area, we chat with several in the crowd who share their opinions of tonight’s performance. Says Bridget from Iselin, “I loved it! The NJSO always plays such a nice variety of music.” Her friend, Marilyn from Chadwick Beach, agrees joking, “Plus, there were no commercials!”

Whereas Lucia, the elementary-school cellist with whom we spoke earlier tells us, “My favorite piece tonight was The Sound of Music,” Susan from Lakewood contends, “I loved the ‘Danzon.’ It was exciting and different from most of the orchestral music I’ve heard. It made me want to get up and dance, it was that infectious!”

Lastly, we chat with Dee from Chadwick who declares, “This was a wonderful concert! All the musicians are so talented,” before concluding, “It was a great way to spend a summer night!” 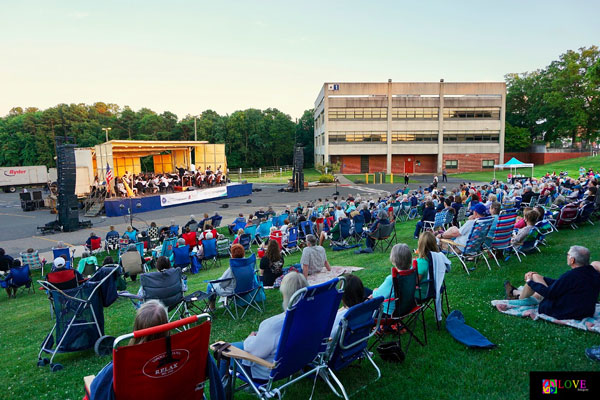 To learn more about upcoming concerts and events by the NJSO — including The Centennial Gala and Concert with Yo-Yo Ma at NJPAC on November 12 — please go to njsymphony.org. To find out more about upcoming programs at Ocean County College — including the Westminster Concert Bell Choir on December 2 and the Vienna Boys Choir on December 8 — please click on grunincenter.org.

Spotlight Central. Your source for Jersey entertainment news and reviews