The Freeman Hrabowski Scholars Program will support up to 150 early career scientists for their research and their efforts to create labs in which everyone can thrive. Applications to the program are open now.

The Freeman Hrabowski Scholars Program is now accepting applications from outstanding basic biomedical researchers, including physician-scientists, who are strongly committed to advancing diversity, equity, and inclusion in science. Over the next 20 years, HHMI expects to hire and support up to 150 early career faculty as Freeman Hrabowski Scholars – appointing 30 Scholars every other year for the next decade. Each Scholar will be appointed to a five-year term, renewable once with evaluation.

Each Freeman Hrabowski Scholar will receive up to $8.6 million over 10 years, including full salary, benefits, a research budget, and scientific equipment. In addition, Scholars will participate in professional development to advance their leadership and mentorship skills.

With these resources, Scholars will be positioned to advance their scientific research and their capacity to create an equitable and inclusive lab climate that values diversity. HHMI anticipates that Scholars will work toward becoming leaders in their field and believes this program can benefit everyone working in Scholars’ labs, providing the foundation for their future success in science. 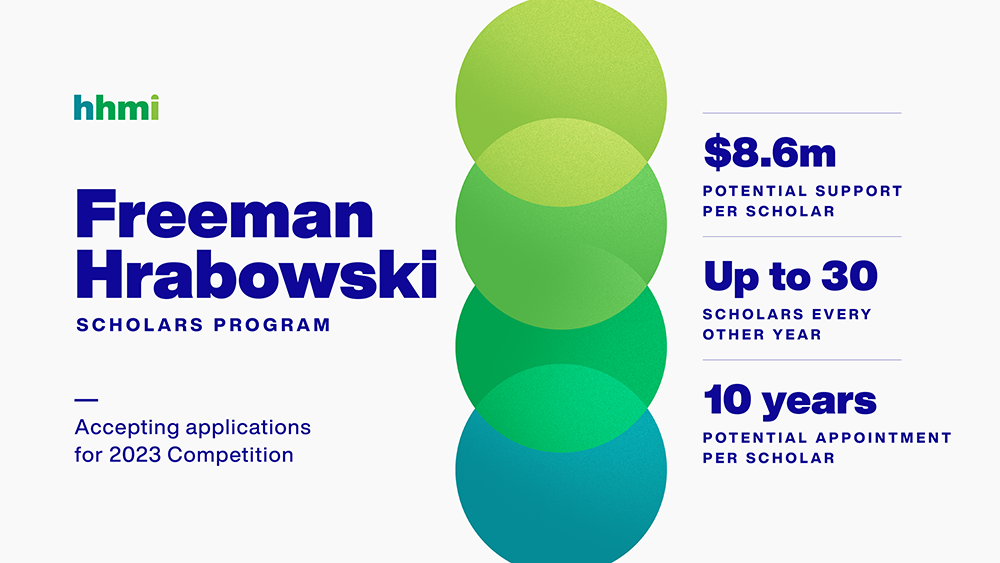 The Freeman Hrabowski Scholars Program is a key step forward in HHMI’s pursuit of diversity, equity, and inclusion goals, announced in 2021, and extends HHMI’s existing commitment to early career scientists at universities, colleges, and research organizations around the US.

“For academic science to thrive in an increasingly diverse world, we need to attract and support scientists from a wide variety of racial and ethnic backgrounds,” says HHMI President Erin O’Shea. “Early career faculty play a key role because they are the leaders of tomorrow. We’re excited to support talented early career scientists dedicated to a model of excellence in science that combines innovative scientific research and intentional, inclusive development of postdocs, students, and other lab members.”

Scholars will maintain their appointments and labs at their home institutions while becoming employees of HHMI. Scholars will be included in HHMI’s community of scientists, educators, and students for scientific meetings, networking, and other opportunities.

“Our goal is to help promising researchers build the future of science,” says Leslie Vosshall, an HHMI vice president and the Institute’s chief scientific officer. “In keeping with HHMI’s ‘people, not projects’ ethos, we want Scholars to follow their own scientific curiosity, ask innovative research questions, and go where the science takes them.”

HHMI named the program in honor of Freeman A. Hrabowski III, outgoing president of the University of Maryland, Baltimore County, and a major force in increasing the number of scientists, engineers, and physicians from backgrounds underrepresented in science in the United States.

“We should all be encouraged by HHMI’s commitment to changing the face of science in America,” Hrabowski says. “This initiative shows what is possible when an institution is guided by its values and by evidence of what works. I am deeply honored to be connected with HHMI and with this new program.”

The Freeman Hrabowski Scholars Program will accept applications through September 28, 2022, at 3:00 p.m. (ET). For more information and application instructions, please visit the program page. For questions, contact HHMI program staff at FHScholars@hhmi.org. Follow the announcement on Twitter using the hashtag #FHScholars or by following @HHMINEWS.

HHMI is the largest private biomedical research institution in the nation. Our scientists make discoveries that advance human health and our fundamental understanding of biology. We also invest in transforming science education into a creative, inclusive endeavor that reflects the excitement of research. HHMI’s headquarters are located in Chevy Chase, Maryland, just outside Washington, DC.