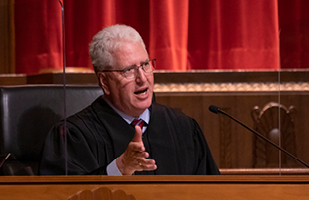 Tenth District Judge William Klatt engages in discussion with an attorney while sitting as a visiting judge for the Supreme Court of Ohio.

Tenth District Judge William Klatt engages in discussion with an attorney while sitting as a visiting judge for the Supreme Court of Ohio.

Like musicians, judges strive to hit the right note. That precision has been part of Judge William Klatt’s personal and professional life for more than two decades.

Judge Klatt sits on the Tenth District Court of Appeals, from which he will retire next February.

“The first thing I bought when I became a lawyer was an old, upright piano, which I learned to play myself,” the judge said.

As a young practicing attorney, Judge Klatt was always looking at how he could have a greater impact. As a lawyer, he entered public service. Musically, he started the Klatt Brothers Band. With its blues and country influence, it has helped raise millions of dollars at charity events over the last 15 years.

“It’s a great way of giving back to the community while spending time with friends,” said Judge Klatt. “Our band practices are like a bowling league where most of the time we play, but we’ve seen our families grow together because of our talks and time spent together.”

He is committed to enhancing the legal system through law and building relationships. Beyond the Tenth District, he has served in leadership positions with the Board of Professional Conduct, the Ohio Access to Justice Foundation, the Ohio State Bar Association, and the Columbus Bar Association. Judge Klatt’s impact on the profession was highlighted in September 2021 when he received one of Ohio’s highest judicial distinctions – the Ohio State Bar Association(OSBA) Thomas J. Moyer Judicial Award. The honor goes to a state or federal judge who displays judicial excellence highlighted by integrity, fairness, knowledge of the law, and professionalism. The accolade is especially personal to the judge since the late Chief Justice Moyer encouraged him to pursue the bench.

“You don’t do anything by yourself,” Judge Klatt said. “Many people play a role in improving the judicial system so it can be as ethical, sound, and equitable as possible.”

His work outside of the Tenth District also includes his service as a visiting judge for the Supreme Court of Ohio. In what will likely be his last scheduled oral argument for the Supreme Court, Judge Klatt recently heard the case of Elliot v. Durrani et al. The Court is considering whether the deadline for filing a medical malpractice lawsuit applies when the doctor has fled the country.

With retirement on the horizon, the judge is looking at new and interesting creative outlets with his additional free time. He’s already started learning magic to entertain his grandkids and he would like to do more writing, including a screenplay. And he will look for ways to continue serving the law. Because like music, he knows there’s always room for improvement.

“I will always feel a responsibility to protect and better our profession in the pursuit of improving our justice system,” Judge Klatt said.