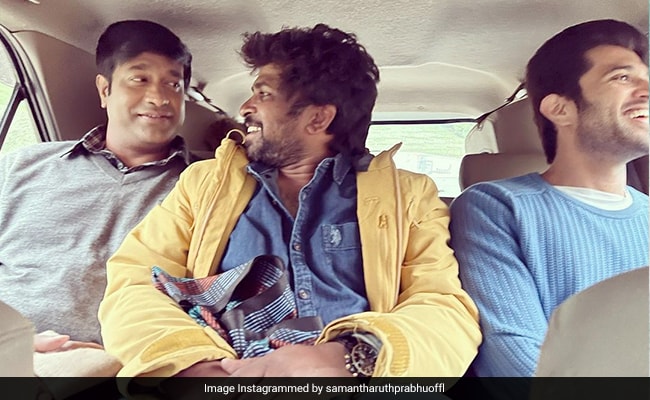 Actress Samantha Ruth Prabhu is having a great time on the sets of her upcoming film Kushi and this is for all to see, thanks to her social media updates. The star is shooting for the film with actor Vijay Deverakonda in Kashmir. And while we are sure that the actress has an amazing role in the film, Samantha has revealed why she actually turns up to set every day. In her own words, the star loves the “entertainment value” she gets at work. So who provides this entertainment? As per her new post, it is her co-stars Vijay Deverakonda, Vennela Kishore and director Shiva Nirvana who are taking care of the daily dose of fun.

Sharing a photo of the filmmaker and two actors wedged in the back seat of a car, Samantha Ruth Prabhu wrote, “I go to work for the entertainment value,” tagging the three men along with the hashtags, “Kashmir diaries and Kushi”.

Over the past few weeks, Samantha Ruth Prabhu has been treating us to a bunch of pictures and videos from Kashmir, where she is shooting. On Sunday, Samantha shared a stunning image of herself. With a shawl covering her head and a large part of her face, only Samantha’s beautiful kohl-rimmed eyes are visible in the image. In the caption, she said, “Half the story.”

While shooting in Kashmir, Samantha Ruth Prabhu was also spotted visiting the local cafes. In one picture shared by the actress, she is seen engrossed in a menu. The photo clicked by hairstylist Rohit Bhatkar was shared by Samantha with just a heart emoji in the caption.

Sharing another set of pictures clicked by Rohit Bhatkar again, Samantha Ruth Prabhu gave us a glimpse of Sonmarg in Jammu and Kashmir. In the caption, Samantha wrote, “Kashmir. I will always have this piece of my heart that smiles whenever I think about you.” Actress Lakshmi Manchu replied with a heart emoji to the post. Director Nandini Reddy dropped a bunch of heart emojis in response. Singer Chinmayi Sripada, who is a close friend of the actress said in the comments section, “Stunning.”

On the work front, Samantha Ruth Prabhu will be seen in Shaakuntalam and Yashoda. The actress was last seen in Kaathu Vaakula Rendu Kaadhal with Nayanthara and Vijay Setupathi.