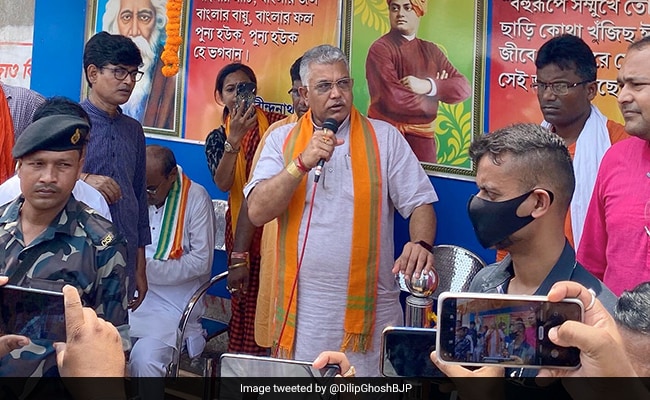 Bengal BJP leader Dilip Ghosh, reacting to a party leader returning to the Trinamool Congress, made a hugely controversial statement today, appearing to trivialise political violence. “It is normal in Bengal politics to make bombs,” he told reporters.

BJP Vice President and MP, Arjun Singh, on Sunday went back to Bengal Chief Minister Mamata Banerjee’s Trinamool Congress, a party he had left in 2019. He also lost no time in declaring that he wants to see Mamata Banerjee as Prime Minister.

Dilip Ghosh lashed out at him, saying “those who don’t practise politics based on principles” will find it difficult to stay in the BJP.

Reporters reminded him of his own allegation in the past that Arjun Singh makes bombs and questioned why he had taken him into the BJP in the first place, if that was true.

“We have inducted a lot of people. In politics, making bombs is a normal thing in Bengal,” Mr Ghosh, the BJP MP from Kharagpur, said.

“Whoever comes from the Trinamool will be like this only. The law is there to deal with it. The place where he is from, either he creates trouble or others create trouble to target him. When he came to the BJP, the torture against him increased. This we have seen. I have taken up his complaints in parliament as well. He could not adjust, that is his problem,” the BJP leader added.

Bengal has seen violent politics for years with country bombs used by political workers to target rivals. The BJP, including Prime Minister Narendra Modi, had made it a big campaign issue in the 2021 Bengal election.

“If you don’t say you want to see Mamata Banerjee as PM then you cannot stay in the Trinamool Congress,” said Mr Ghosh on Arjun Singh’s praise for the Trinamool chief.

When reporters pressed him on Arjun Singh, asking him whether “is still a criminal (goonda)”, Mr Ghosh said: “I don’t know what the definition of goonda is. I am also a goonda according to some people’s designation. It’s fine. This is politics.”