With confidence in the Supreme Court falling, more than half of Americans oppose the decision to overturn Roe v. Wade and nearly six in 10 say the ruling was based more on politics than on the law, according to the latest poll from the PBS NewsHour, NPR and Marist. Conducted in days following the decision, this latest poll also found that more than half of Americans are concerned that the Supreme Court will reconsider issues such as contraception and same-sex marriage.

“A majority of Americans see this as a political statement rather than a legal one,” said Barbara Carvalho, who directs the Marist Poll, adding that it is unclear whether the Supreme Court can “restore Americans’ confidence in the institution.”

Poll after poll has shown that Americans overall favored keeping Roe v. Wade intact. On Friday, the Supreme Court revoked nearly five decades of constitutional protections for abortion. In its 6-3 decision, the court’s conservative majority upheld a law in Mississippi that prohibited the procedure after 15 weeks of pregnancy, and a smaller majority signed on to strike down Roe. 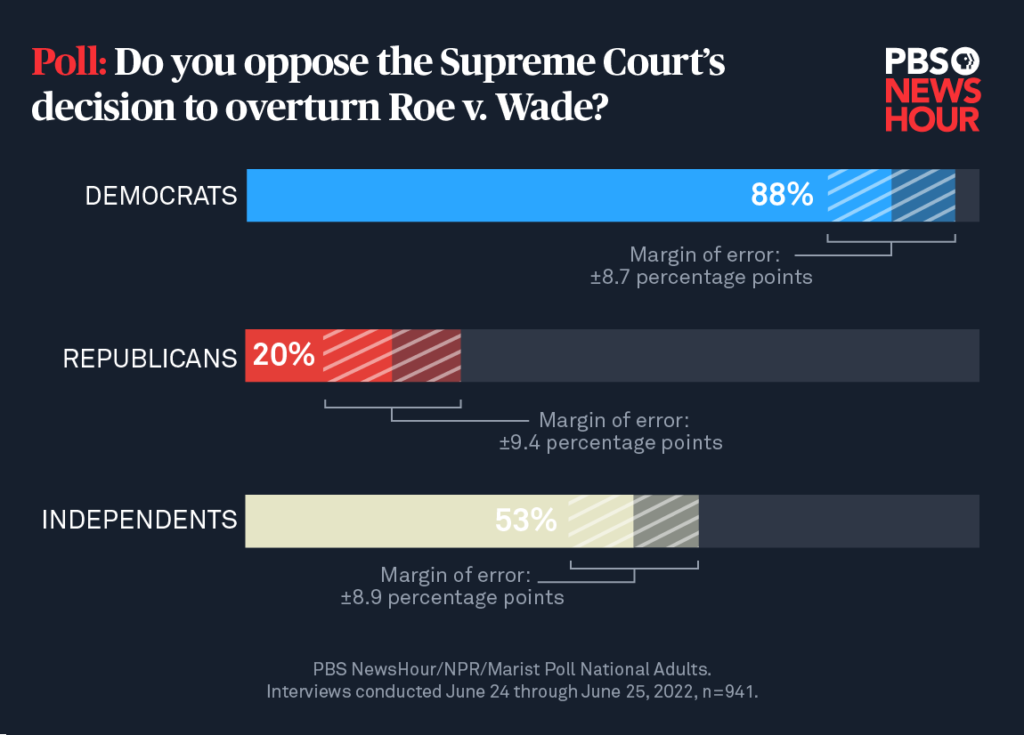 “The Constitution makes no reference to abortion, and no such right is implicitly protected by any constitutional provision,” Justice Samuel Alito wrote, sending the question of abortion legality and access back to the states.

Fifty-six percent of U.S. adults opposed the court’s decision, including 45 percent of Americans who said they were strongly opposed. On the other end of the spectrum, 28 percent said they strongly support the court’s move.

In his concurring opinion, Justice Clarence Thomas said the court should reexamine legal questions around the right to contraception, same-sex partnerships and same-sex marriage – an outcome that 56 percent of Americans said concerns them.

Here are more key takeaways from the poll.

A majority have little to no confidence in the Supreme Court 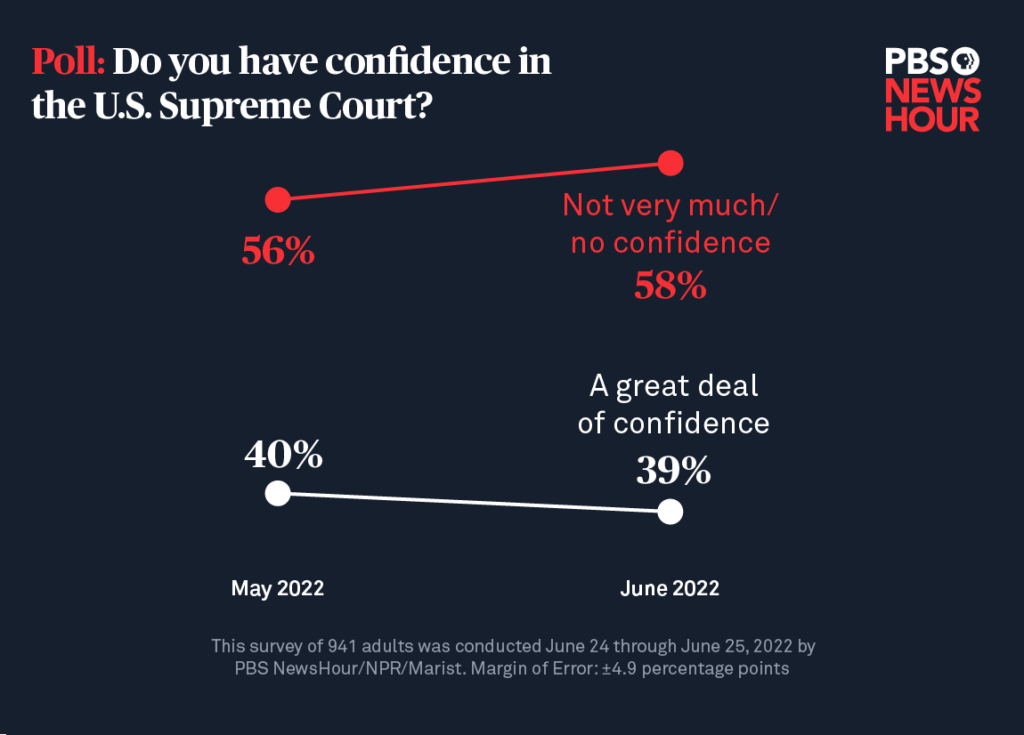 For anti-abortion activists, this moment was decades and numerous state-level challenges in the making.

The court’s decisions came after “years of what we believe is the greatest human rights movement of our time,” Marjorie Dannenfelser, the president of Susan B. Anthony Pro-Life America, told the PBS NewsHour’s Judy Woodruff on Friday, adding: “In every single abortion, there are two that must be served.”

The decision marks the first time in U.S. legal history “where there’s a liberty for this many people that was taken away,” said Mary Ziegler, law professor at the University of California and author of “Dollars for Life: The Anti Abortion Movement and the Fall of the Republican Establishment.”

Even with the court’s decision leaked to the public in May, Ziegler said, “A lot of people didn’t expect this to happen or probably didn’t even know this was going on” and now, people may “wake up and find they can’t do things they were planning to do or were expecting to do.” 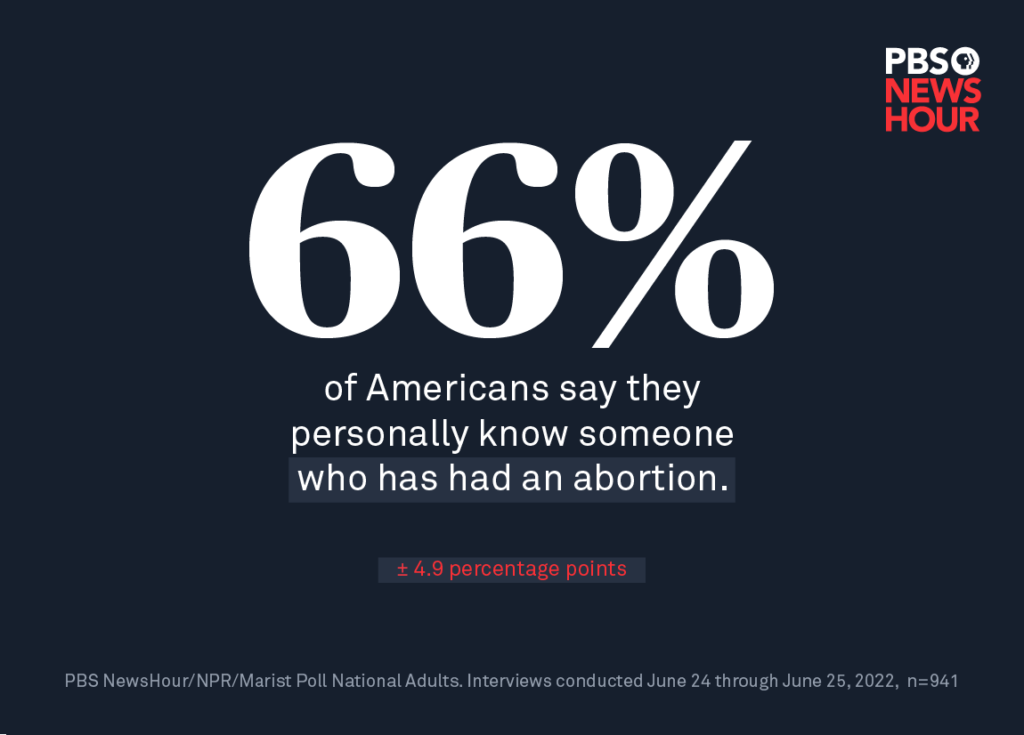 Two-thirds of Americans say they or someone they know have had an abortion, the poll found. That includes roughly three-quarters of Democrats and independents and half of Republicans. Nearly all abortions happen during the first three months of pregnancy, according to the Kaiser Family Foundation, which also said that women who get abortions are more likely to live in low-income households, be young, already have kids and are from communities of color.

“People suffer when access to medical care is stripped away,” Dr. Iffath Abbasi Hoskins, president of the American College of Obstetrics and Gynecologists, told journalists during a telebriefing on Friday.

More than half of all states have either already banned abortions, are poised to do so, or are committed to erecting new restrictions to prevent more people from receiving these services, according to analysis from the Guttmacher Institute. President Joe Biden called the court’s decision and its implications “cruel” and warned that it “will have real and immediate consequences.”

In eliminating a decades-old “constitutional right that safeguards women’s freedom and equal station” and breaching a core legal principle of precedent, the decision “places in jeopardy other rights, from contraception to same-sex intimacy and marriage,” Justices Stephen Breyer, Sonia Sotomayor and Elena Kagan wrote in dissent. They also warned that it would undermine the court’s legitimacy – a prediction borne out in these poll results.

Supporters and opponents of abortion have signaled that the debate is far from over.

“People don’t necessarily see this as a one-and-done,” said Lee Miringoff, who directs the Marist Institute for Public Opinion.