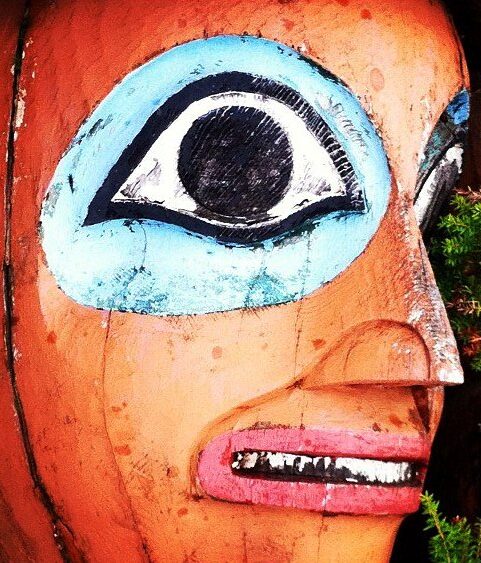 Close up of a totem pole in Klawock (KRBD staff photo).

And some ships have already made plans to visit. The Oceania Cruises ship Regatta is scheduled to bring as many as 655 passengers to Klawock in less than a year. Oceania Cruises has scheduled a total of four stops in Klawock next year starting next May.

But is Prince of Wales Island prepared for an influx of cruise tourists?

Prince of Wales Chamber of Commerce Board President Amy Twyman said there hasn’t been official communication between the chamber and its businesses about how to adapt to an increase in tourism.  But she says she’s heard some anecdotal concerns from the community.

“We have some issues with businesses keeping employees and getting employees,” Twyman said. “And so I think that there’s a concern about what the increase in business is going to do to our, to our businesses, how it’s going to impact them and how they’re actually going to adequately serve the number of people.”

She said others worry about the impact on Klawock’s public facilities.

“One big concern that people have is more people are going to, there’s going to be more people needing restrooms and whatnot, and things of that nature,” according to Twyman.

Despite the concerns, Twyman said her group is prepared to be a resource as Klawock’s economy moves away from extractive industries like logging.

So far, she said there aren’t firm plans for what cruise passengers will do in Klawock. In a news release, Klawock Heenya says some tours will focus on things like totem poles and wildlife viewing. Alexis Whiteley, a spokesperson for Oceania Cruises, said future offerings could include totem and carving tours, kayaking, rafting, sightseeing and fishing.

Twyman said she expects cruise visitors to fan out across the island.  She listed Kaasaan, Hydaburg, Thorne Bay and Coffman Cove as possible stops on a cultural tour.

Katie Rooks operates Prince of Wales Excursion Outfitters. She said her feelings about cruise ships coming to town are mixed.

“I see both positives and negatives with cruise ships, as I think most regional residents probably do,” Rooks explained. “Cruise ships do bring economic benefits but they also bring, you know, visitors that might not be prepared for the situation on the ground, with regard to certain areas in Southeast, sometimes visitors who are a little less than respectful of, you know, natural resources or our towns and villages.”

“That being said, it is an opportunity,” Rooks continued. “And it remains to be seen if it’s going to work well or not. And I don’t think that we should, you know, throw the baby out with the bathwater, so to speak. I think we should take a wait and see approach and give it a chance.”

Chace Anderson is the manager and co-owner of Klawock’s Fireweed Lodge. While the lodge largely offers whole-day fishing trips for those who have booked a stay, she says they’ve been talking with Klawock Heenya about future possibilities.

“We have been discussing some things with Klawock Heenya about doing some luncheon possibilities,” Anderson said. “So we may be doing something along those lines with cruise ships.”

Personally, said she thinks the ships are a positive thing for Klawock.

Klawock Heenya says the development is similar to Hoonah’s Icy Strait Point. Both projects use the Huna Totem Port Development Model. Huna Totem attributes Icy Strait Point’s 2020 Seatrade Global Port of the Year award to its model, which seeks to mitigate the impact of cruise ship tourism on small communities.

It’s a development that many hope will be a chance to show visitors Klawock’s potential as a destination for cruise ships, even if it brings challenges along the way.

Raegan Miller is a Report for America corps member for KRBD. Your donation to match our RFA grant helps keep her writing stories like this one. Please consider making a tax-deductible contribution at KRBD.org/donate.