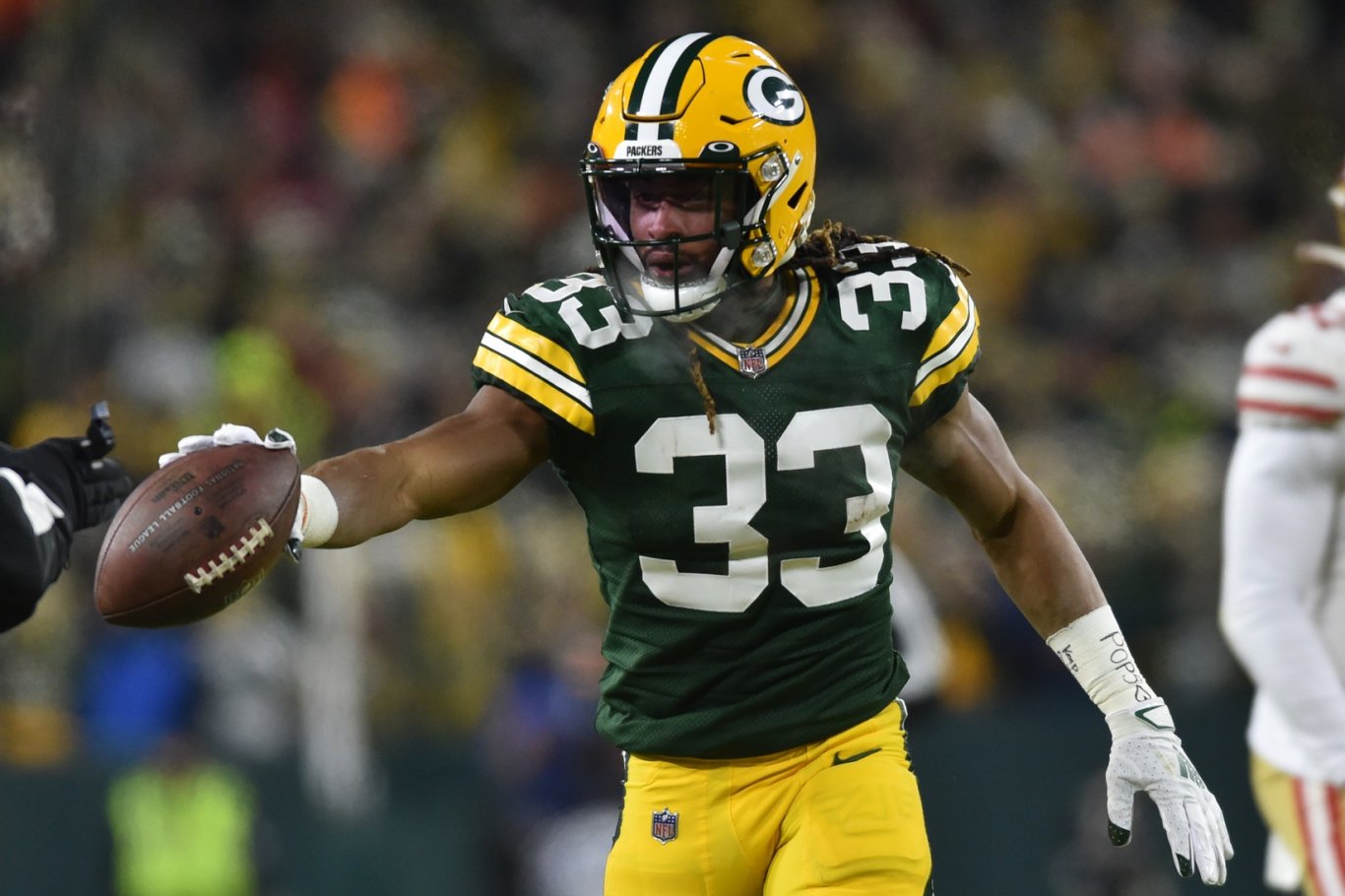 The departure of Davante Adams, Marquez Valdes-Scantling and Equanimeous St. Brown will certainly cause a change in focus for the Green Bay Packers offense. Who will be the biggest beneficiary? It won’t be Allen Lazard, or Randall Cobb, or Josiah Deguara, or Robert Tonyan, or Christian Watson.

The player who stands to gain the most individually is Aaron Jones. Yes, I know there is much hype about the rookie receivers. I am aware Green Bay is 7-0 without Adams since 2019. But let’s get real. The Packers’ passing offense is simply not going to be as good in 2022. Not without the best receiver in football, and without its best deep threat. Aaron Rodgers may be a four time MVP, but he’s not a miracle worker.

It stands to reason the Pack will at least try to run the ball more often. That stands to benefit Jones and his running back mate AJ Dillon. But Jones is also going to be Rodgers’ favorite passing target. The Arizona game last year is a good template. Green Bay went into that contest without Adams, MVS and Lazard. The answer? Use your backs as receivers. Jones led the team in that game with eleven targets, five more than any other player. He also carried the ball fifteen times. You can expect that to be a consistent stat line for the sixth year veteran this fall. Yes, Dillon will eat into many of the carries, but Dillon is not the explosive talent that Jones is.

Number thirty-three has played in the shadow of Adams for five years, but this will be the season he makes the jump from good player to star player. It couldn’t happen to a nicer guy. Unlike Rodgers, David Bakhtiari and Jaire Alexander, Jones was not caught up in the ego trip of having to be the highest paid player at his position. He turned down higher offers from other teams to sign a four year extension worth an average of $12 million per year in 2021. Currently that is no higher than tied for seventh among the league’s running backs in terms of average annual salary. He wanted to stay with the team that gave him a chance, the team that made him a fifth round draft choice out of Texas El Paso in 2017, Ted Thompson’s final draft for Green Bay. He is active in the community and humble in the locker room and in front of the media. Small wonder he is one of the team’s most popular players.

Jones is quietly working his way up the list of career rushing leaders for the franchise. He currently stands fifth, but by the time the Packers finish their week one game at Minnesota, he may well have moved up to third. He needs just 34 yards to surpass Tony Canadeo for fourth place, and only 61 yards to move ahead of John Brockington into third. However, from there it’s a long journey to the top two spots.

He trails second place Jim Taylor by 4,044 yards. He would need 4,159 to catch Ahman Green for first place all time. In his first five seasons, Jones has averaged 833 rushing yards each. He would need to maintain that average for nearly five more seasons to pull ahead of Green in first place. He will turn twenty-eight years old in December. The general perception is that most backs begin to decline around age thirty. It’s hard to see Jones getting to the top of the rushing chart, especially in this age of pass happy offense.

The Texas native is already third in rushing touchdowns with 41, behind Green (54) and Taylor (81). Taylor’s mark may never be broken.

Regardless of where Aaron Jones winds up in the Green Bay record books, this figures to be a career season for him, provided he stays healthy, which is not a lock. Though he is just 5’9”, and weighs around 210 pounds, he runs very hard, which means he takes a considerable pounding. He’s only had one season in which he has played every game. He’s missed twelve contests over his five years. The Packers must limit his work. That’s where Dillon comes in. It may surprise you to know Dillon carried the ball sixteen more times than Jones in the 2021 regular season. A bit deceiving, considering Dillon played two more games.

Bottom line, circumstances are set up for Jones to have a stellar season. Draft him for your fantasy team. He’s going to get more rushes, more receptions, and more touchdowns than ever before. Let’s hope nice guys can finish first.