LOS LUNAS — After more than 40 years teaching music in Valencia County, with the past 12 1/2 leading the band and guitar programs at the School of Dreams Academy, Jeff Jolly is hanging up his teaching cap.

“I love teaching and I love teaching kids,” Jolly said. “I’m going to miss this in a lot of ways. It’s just in some respects that now is the right time for me to stop.” 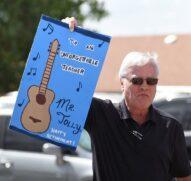 First beginning his relationship with music at the age of 4, Jolly said it has been a constant passion in his life. Although he originally wanted to go to college to study pre-law, music pulled him back in, persuading him towards a career in music education.

Jolly began teaching music with Belen Consolidated Schools in 1981. After 27 years with the district, he began his first “retirement,” which ended up being an 18-month break.

“At that point, it was only two hours a day, four days a week,” Jolly said after spending more than a decade teaching at SODA. “Well, yeah, I can do that.’ But, of course it turns into more the longer you stay.”

At the end of May, all of the students and staff at School of Dreams Academy wished Jolly well in his retirement with a ceremony filled with music, and students from past and present.

“I’m just blown away. I am very honored and humbled, and just amazed by all of the trouble you’ve gone to on my behalf,” Jolly said to the crowd attending a celebration in his honor. “I’ve always been impressed at the enthusiasm, positive attitudes and generosity of the people of this school.”

His last batch of seniors, who called themselves the OGs, closed out the ceremony first with a plucky version of “Hot Cross Buns” on guitar before playing two Emmy-award winning songs Jolly composed himself. The long-time music teacher taught this particular group of students since they were in middle school.

“At my previous school, I had a teacher that played well, but he couldn’t teach,” said Reeve Winker, a 2022 graduate of SODA and member of the OGs. “But, when I moved here, I wouldn’t have been able to excel to where all of us were at — not only me but everyone here — to our level. He helps us out. We’re going to stay in contact with him after school and see if we can join a small group, some alumni group.” 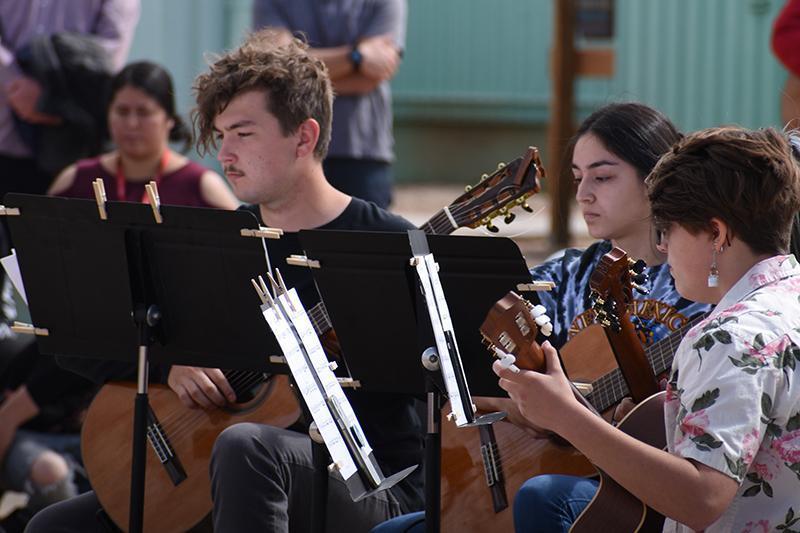 Makayla Grijalva | News-Bulletin photo
Reeve Winker, Andrea Maldonado, Faith Pearson and Nayeli Resendiz, all 2022 graduates
of School of Dreams Acadamy, and students of Jeff Jolly since they were in middle school,
closed out the ceremony with performances of his two Emmy-award winning compositions
from the biography film “Osimi.”

“He’s just an incredible person and an amazing teacher. I’m going to miss him so much,” said Faith Pearson, another member of the OGs.

The group of them agreed the most memorable moment they had with Jolly as their music instructor was when they had the opportunity to play at the Kimo Theater in Albuquerque during a showing of the movie “Osimi,” in 2018 — the same two songs they performed at his retirement ceremony.

“They hadn’t performed them in a while. I’m amazed that they put that together, “ Jolly said with a smile. “Those guys, they are something.”

In his retirement, Jolly said he still plans on writing and composing music, as well as just taking some time for himself.

“Sleeping in, gardening. I want to fly fish, garden some more,” Jolly said about his plans following his retirement from education. “Those are the main kinds of things right now.”

At the end of the ceremony, the school honored Jolly with a large card thanking him for coming out of retirement to teach music for 12 years at School of Dreams Academy, and commending him for his commitment to music education.

“Hopefully,  we spend our whole lives learning,” Jolly said. “We don’t just learn here at school, but we learn forever — we learn as youngsters and even when you become ancient like me. Hopefully, you’re still learning.”