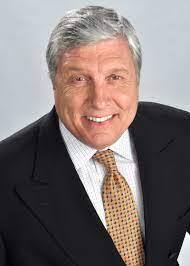 John Popovich is a TV sports legend in Cincinnati where he worked for 40 years before retiring in 2019. But, Popo, as he’s known in the Queen City, says that his legendary career started in Athens, Ohio at WOUB.

“The professional staff members in the WOUB newsroom treated the student volunteers like employees,” said Popovich. “They asked you to do something, expected you to get it done, and you were held accountable. It was really good preparation for a career in media.”

Popovich graduated in 1969 from Struthers High School near Youngstown, Ohio, where he worked at a student-operated radio station, WKTL.

“We did news and weather and played music, I was able to do play-by-play for sporting events,” said Popovich. “I thought this was great.”

So, when it came time to pick a college, Ohio University was the perfect fit for Popovich for a couple of reasons.

“Both of my older brothers went to Ohio University, so I already knew a lot about the place,” said Popovich. “I knew the school had a great reputation for communications and since that’s what I wanted to study, it was perfect.”

Because of his experience at WKTL, when Popovich walked in to WOUB, the telecommunications major thought he knew all there was to know about radio. But he quickly learned that wasn’t the case.

“WOUB was an eye-opening experience,” said Popovich. “I got to WOUB, and I realized I knew nothing.”

Even though Popovich enjoyed covering sports, as a college student he recognized there were a lot more career opportunities in news. So, Popovich worked on the news side of things at WOUB.

“The professional staff, Doug Caldwell and John Chalfant, they embraced whatever I wanted to do and got me involved,” said Popovich. “I worked on the morning radio show with fellow student Don Benson. I did mostly radio during my time at WOUB. I only did a little TV.”

“WOUB really prepared me for the real world. There were high expectations for the students,” said  John Popovich.

Once Popovich graduated in 1973, he got his first job in Dubuque, Iowa in radio news. After that, he moved on to WOC in Davenport, Iowa.

“WOC was a radio and TV station, so that’s when I got into television,” said Popovich. “I was originally doing news and then about three years into it, the sports director quit. And the news director asked me if I was interested in doing sports. I had always been more of a sports guy, I found it fit my temperament. So that’s when I started in sports.”

In 1979, Popovich was hired at WCPO in Cincinnati, and that was his final career stop.

“I was hired at WCPO mainly to do sports features on high school and college kids,” said Popovich. “They were sometimes humorous, sometimes sentimental profiles. I did a lot of different things, and WCPO gave me a free hand to do it.”

About a year into his time at WCPO, the station asked Popovich to start an 11:30 p.m. Sunday night program called Sports of All Sorts.

“I started hosting that show in 1980, and then became sports director a few years later,” said Popovich.

Popovich hosted the program for 33 years and then spent the remainder of his time at WCPO as the weekday 6 and 11 p.m. sports anchor. He retired in 2019.

Popovich is tremendously proud of his career, and credits the solid foundation he built at WOUB.

“WOUB really prepared me for the real world. There were high expectations for the students,” said Popovich. “The other thing is that WOUB was the first time I was ever surrounded with so many good people. When you surround yourself with good people, it raises everyone’s level of performance. I learned from every one of those people, fellow students and professional staff members. It was invaluable.”