You’re reading the web edition of STAT Health Tech, our guide to how tech is transforming the life sciences. Sign up to get this newsletter delivered in your inbox every Tuesday and Thursday.

Facebook is getting sensitive health data from hospital websites

A tracking tool installed on many hospital websites has been gathering patients’ sensitive information and sharing it with Meta’s platform Facebook, an investigation from The Markup finds. Out of 100 top hospital sites, 33 had installed a tracker called Meta Pixel that sends the social media giant data, in exchange for analytics about the ads that health systems place on Facebook and Instagram.

The tracker sends Meta data when people schedule appointments, which could include IP addresses, doctors’ names, and a search term used to find the doctor — which could be as sensitive as “pregnancy termination,” the investigation finds. Meta Pixel was also installed inside patient portals for seven health systems.

The Markup did not find evidence that the health systems nor Meta were obtaining patients’ consent, which some experts said could constitute a HIPAA violation. Read the full investigation, co-published with STAT.

Verily co-founder on the business case for real world data

With help from former FDA bigwigs like Amy Abernethy, Alphabet life sciences spinout Verily has set out to become a leader in collecting and processing real world data  assembled from medical notes, insurance claims, social media posts and more. It’s information that could help us learn how new treatments, including drugs, really work. This week at the BIO conference, STAT biotech reporter Jonathan Wosen chatted with Verily co-founder and chief medical and scientific officer Jessica Mega about the company’s health data projects, which include using wearables to better understand the progression of Parkinson’s disease and developing more accessible continuous glucose monitors for diabetes in a partnership with Dexcom.

Asked about Verily’s business model, Mega said real-world data could help research and development organizations zero in on new targets. “So if someone starts to understand and subset diabetes, you might actually have new biological pathways, and you may even think about new targets,” she said. A prime example: Verily’s partnership with Sosei Heptares, aimed at  identifying new biological targets for therapies.

A small study of about 20 orthopedic trainees found little difference in time or physical accuracy for a routine pediatric procedure when trained on a physical model, a virtual reality module, or reading and watching videos. But trainees preferred VR over reading and watching videos, the study finds. The authors say that while practicing on a physical model “may be the most realistic method to train novice surgeons,” VR might work just as well “while offering a more convenient [way] to practice surgical skills,” authors wrote.

Agreeing on what “good” means 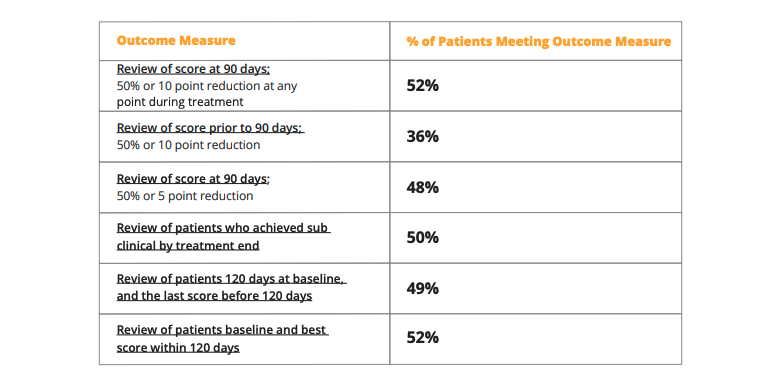 You wouldn’t compare a measurement in kilometers to a measurement in miles, but in a new paper, Concert Health argues something very similar is happening among the crop of new companies offering collaborative care to treat behavioral health issues in primary care. Concert says that companies reporting their results aren’t all using the same treatment windows or targets. Concert offered up its own scores to show how the most rigorous form of measurement can impact how effective a treatment looks. (Spoiler: Concert thinks it’s very rigorous.)

The goal, COO Virna Little told STAT, is to encourage consistency and transparency: “If you’re going to be in this space, and you’re going to say you’re getting people better, let’s talk what your outcomes are,” she said.

Flip the switch to bilingual

There’s an uptick in digital health companies working on translating their tools. Blue Note Therapeutics, which is developing products for cancer-related anxiety and depression, recently announced a free cancer wellbeing product in Spanish, following news from Pear Therapeutics earlier this year that its treatments for substance use disorder and opioid use disorder would be available in Spanish. And this week, at-home diagnostics company Everly Health has made a Spanish version of its services available through its enterprise arm, including test kits, results, online resources, and telehealth consultations in Spanish.

FTC is latest to investigate Cerebral

As online mental health competitors seek to distance themselves from Cerebral — which has faced censure and government inquiry for its targeted ads and dispensation practices for controlled substances — yet another federal agency is looking into the company following an existing Drug Enforcement Agency investigation. The Federal Trade Commission is investigating whether Cerebral’s business practices were “unfair and deceptive,” the Wall Street Journal reports.

Previous post KHN’s ‘What the Health?’: Closing In on Covid Vaccines for ‘The Littles’