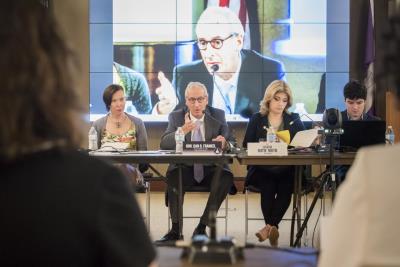 PITTSBURGH, Aug. 11 – Despite the fact that abortion remains legal and safe in Pennsylvania, testifiers explained the health care difficulties and issues now starting to emerge across Pennsylvania as a result of the U.S. Supreme Court’s Dobbs decision during a joint hearing involving the PA House and Senate Democratic Policy committees at Chatham University Thursday.

The hearing featured testimony from medical and legal professionals, as well as reproductive health care advocates on what they are experiencing since the Supreme Court overturned Roe v. Wade and neighboring states have passed abortion restrictions. State Sen. Katie Muth and state Rep. Dan Frankel co-chaired the hearing.

“Since the Supreme Court decision Dobbs v. Jackson Women’s Health Organization, the health care landscape in Pennsylvania has changed significantly and become more complex,” Frankel said. “As we have heard during previous hearings and again today, restrictions on health care never makes a country healthier and it creates a number of underlying problems for residents as well as our health care providers.”

The Women’s Health Caucus called for a series of hearings to discuss a post-Roe Pennsylvania and hear from providers and experts on how Pennsylvania’s health care providers are affected by law changes.

“Today’s hearing continued to shine a light on the alarming fallout health care providers and individuals are facing across the nation since the June 24 ruling by the Supreme Court wiped out almost 50 years of precedent – not to mention the ability to receive vital life-saving care,” Muth said. “As someone who grew up in western Pennsylvania, it’s disturbing to hear that clinics in Pennsylvania are now seeing an influx of two to three times the number of patients because of restrictive laws in neighboring states, which in turn delays access for Pennsylvania residents.” 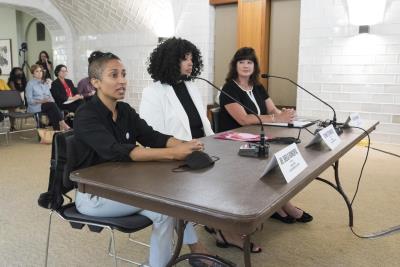 Before the overturning of Roe. V. Wade, Dr. Sheila Ramgopal, the CEO of independent Allegheny Reproductive Health Center, said about 30% of her patients came from out of state. Since the overturning of Roe v. Wade and abortion restrictions in neighboring states have been signed into law, her center has seen a considerable increase of patients from out of state – estimating that her center is seeing between 60% to 70% of out-of-state patients.

“Everyone is tired,” Ramgopal said, “and not just physically, we are emotionally and spiritually tired. We are experiencing empathy overload. People are calling us and trying to figure out how to get to us, and we are hearing so many desperate stories.”

State Rep. Mary Isaacson questioned testifiers to learn how rape exceptions would work, and health care providers noted the many difficulties of making that a reality after abortion has been restricted. Testifiers noted they have cared for patients for months before patients reveal they have been sexually assaulted. Co-chair Muth, who has revealed she is a rape survivor, noted she “did not tell a soul” for eight years.

“As we heard today, and as we heard throughout this series of hearings, there’s no easy answers when it comes to restricting abortion,” Isaacson said. “If abortion is restricted, the education throughout our state for health care professionals changes and alters their experience in performing lifesaving procedures – putting our residents’ lives at risk.”

Sue Frietsche, who is the senior staff attorney at the Women’s Law Project, noted the overturning of Roe also created myriad legal questions, problems and issues – including out-of-state residents receiving care in Pennsylvania and returning to a state with restrictive laws.

“People are saying we are going back to before Roe,” Frietsche said. “That’s not correct. We are in a place where we have never been before. … The confusion and fog around the legality about abortion is hurting people.”

Written testimony submitted for the hearing can be found here: https://www.pahouse.com/files/Documents/Testimony/2022-08-10_051406__TestimonyBinder81122PostRoeHearing.pdf.