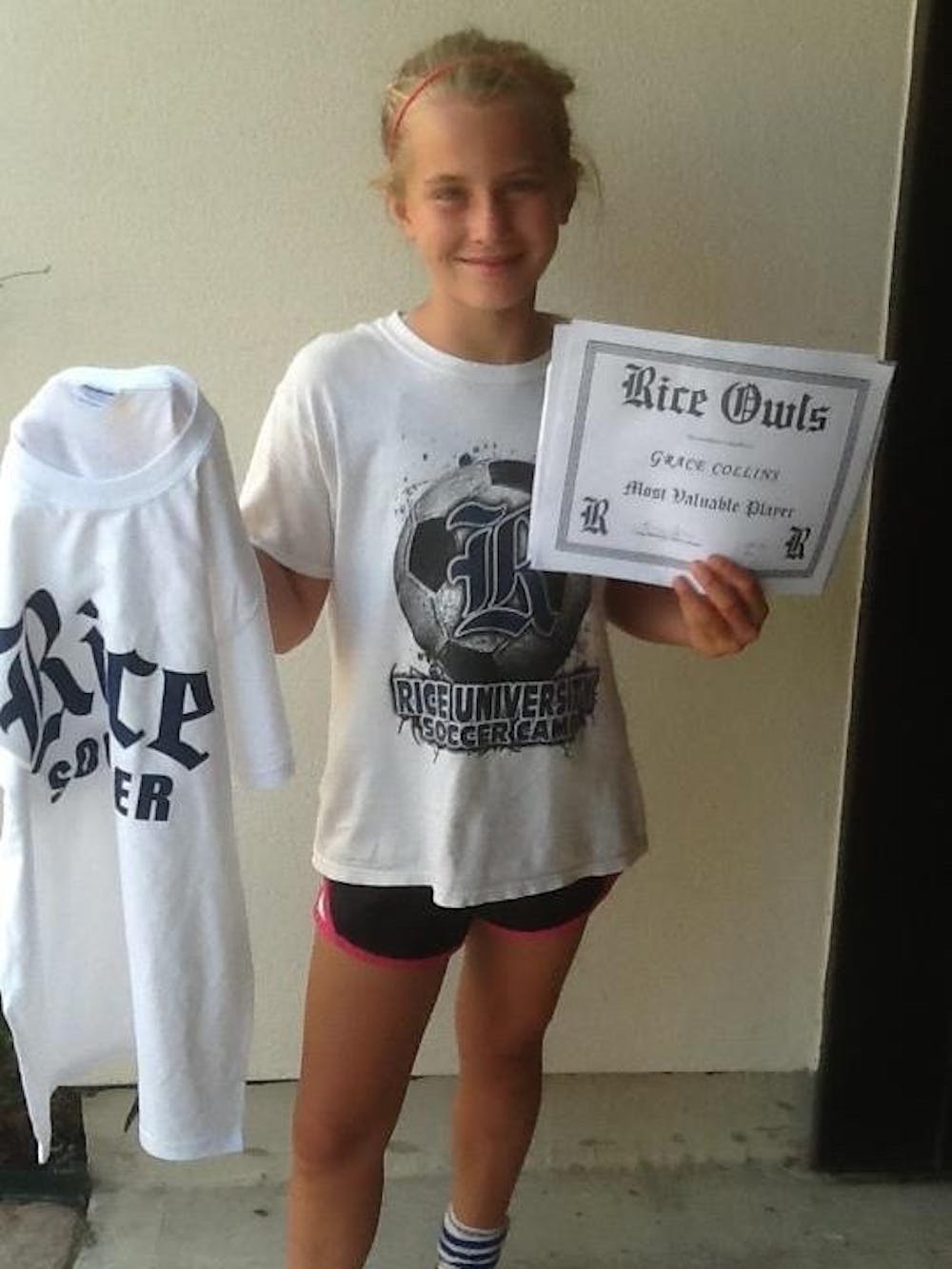 From breaking assist records to scoring game-winning goals and, last week, earning the United Soccer Coaches national player of the week honors, graduate forward Grace Collins has been all over the pitch and the papers this season, helping the Rice soccer team clinch the Conference-USA regular season title. Despite the graduate transfer’s outstanding season, it came close to not happening after the end of last year.

“I didn’t even know if I was gonna play this year, to be honest,” Collins said.

After finishing off a decorated career at Texas Christian University that included Big 12 Player of the Year and second-team All-American honors, Collins considered not returning for another year of soccer. While weighing her options, the Houston-native thought back to where she grew up and where her passion for soccer was fueled.

“I have a family connection to Rice,” Collins said. “My uncle played tennis here, and my aunt ran track. I went to Rice soccer camps over the years. I have a photo on my phone of me at a [Rice] camp, I got the MVP award and I had this big smile on my face. I really enjoyed going to those soccer camps when I was little.”

While the decision to play soccer in a tennis-dominated household was, in part, led by her desire to form her own path, her love for the sport drew support from her family.

“My parents saw [that] I had so much fun playing soccer,” Collins said. “My mom definitely was a factor in that; she always drove me to all my practices and really made the extra effort, so she has always been a big person in my soccer career.”

Enjoy what you’re reading?
Sign up for our newsletter

Once she reached middle school, she began playing in leagues and clubs that exposed her to a higher level of competition and showcases. While traveling around the region and performing well at these showcases, Collins began gaining recognition from soccer programs around the country, leading her to several college visits and an early recruitment process.

“I played up [in age group] and went to a few more showcases,” Collins said. “I originally committed to TCU when I was a freshman [in high school], so those showcases went pretty well because I had college interests at a younger age.”

After a successful high school career, leading Memorial High School to a 6A State title her junior year and being named the Gatorade Texas Girls Soccer Player of the Year, Collins began her collegiate career at TCU. As a true freshman, she started in all 22 games and was fourth in points on the team. Her second season was her most successful yet, but she had to overcome both injury and an unprecedented pandemic-affected season.

“I had a stress fracture in my foot, and I had to play the [first half of the 2020-2021] season on it,” Collins said. “I think we played our last [conference] game Nov. 6 and I had surgery Nov. 20. [That season was my most challenging] because of testing for COVID, dealing with an injury [and] the unknown of if we were going to get shut down.”

Despite these challenges, Collins’ success on the pitch earned her Big 12 Player of the Year honors as she led TCU to the Elite Eight of the NCAA tournament. Her form carried on to her final year at TCU where she led the team in assists in another run to the Sweet Sixteen.

Rice soon became an option for Collins after finishing up a degree in Accounting and Finance from TCU. According to her, the academics at Rice followed by connections on the team were what attracted her to the possibility of playing another year of soccer.

“I knew Rice had the Master of Accounting program, and I wanted to come back to Houston, so that was the first thing I thought of,” Collins said. “Then I just talked to Bella [Killgore about the team]. I sort of didn’t think about soccer for a month and then decided to keep playing.”

Her decision to play another year and come to Rice has paid off. While in the McNair School of Business pursuing a masters in accounting, Collins leads the team in goals, assists, points, shots, shots on goal and game-winning goals, while guiding the team to an undefeated record in conference thus far. According to her, the transition into the new but familiar environment has been swift.

“The coaches have been great; [I’m] trying to step into a role of helping out wherever I can,” Collins said. “The girls here are super welcoming, it was pretty easy [to transition]. It might have to do with maturity, having played college soccer for three years and knowing what comes with the territory, but the transition was super easy for me.”

As Collins closes in on the last few games of her decorated collegiate career, being back in her hometown has reminded her why soccer has been such an important part of her life.

“It seemed like the perfect fit to be at such a great school and end my soccer career with my family around me,” Collins said. “[Playing at Rice] has really reminded me why I love playing soccer and why I’ve stuck with it all these years.”