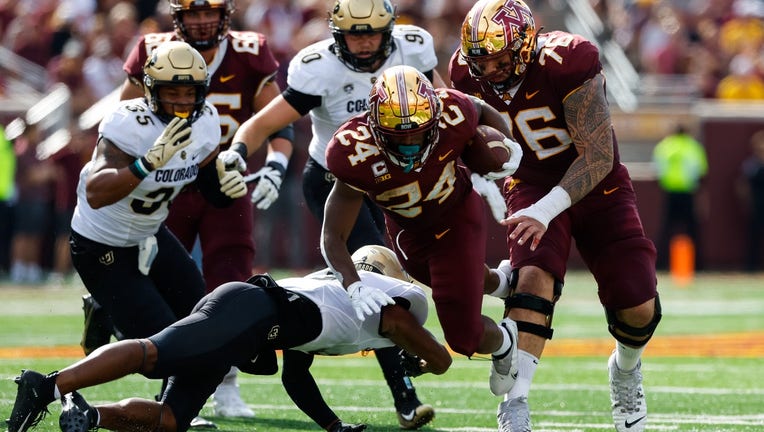 Mohamed Ibrahim #24 of the Minnesota Golden Gophers is tackled by Jeremy Mack Jr. #3 of the Colorado Buffaloes in the first quarter of the game at Huntington Bank Stadium on September 17, 2022 in Minneapolis, Minnesota.  ((Photo by David Berding/Getty Images))

MINNEAPOLIS – Mo Ibrahim had a career day as the University of Minnesota football team closed out the non-conference schedule undefeated with a dominating 49-7 win over Colorado on Saturday at Huntington Bank Stadium, but it might have come at a cost.

Gophers top receiver Chris Autman-Bell left the game in the first half with what appeared to be a significant injury to his right knee. Autman-Bell had three catches for 58 yards, including a 39-yard touchdown from Tanner Morgan, before exiting. It happened late in the first half as he tried to jump for a catch, landed on his right leg and immediately grabbed for his right knee. He was down on the field for several minutes before exiting with the help of two trainers, unable to put much weight on the leg.

Autman-Bell came back for his sixth year at Minnesota, and entered the season as the Gophers’ top receiver. He didn’t return, and was not on the sideline for the second half.

Minnesota took control of Saturday’s game from the opening kickoff. Ibrahim had 20 carries for 179 yards and three touchdowns in the first half, averaging nearly nine yards per carry, as Minnesota took a 35-0 lead into the locker room. He moved up to fifth all-time in rushing yardage, and is tied with Darrell Thompson at 40 career rushing touchdowns. Ibrahim now has seven on the season, and his first two Saturday came less than a minute apart in the first quarter. He finished the day with 23 carries for 202 yards, his fourth career 200-yard game, a school record and 12th straight 100-yard game. Most Gophers’ starters were pulled in the third quarter.

Morgan finished the first half 9-of-14 for 131 yards, touchdowns to Autman-Bell and Dylan Wright, and an interception after a pass to Brevyn Spann-Ford was bobbled. The Gophers out-gained the Buffaloes 349-39 in the first half, limiting Colorado to just three first downs. Minnesota got a sack and forced fumble from Terell Smith on the Buffaloes’ first offensive play, and got another sack from Danny Striggow.

The third quarter started with Mariano Sori-Marin getting a fourth down pass break-up for a turnover on downs. The Gophers turned it into points, with Morgan hitting Clay Geary for an 8-yard touchdown and a 42-0 lead. Morgan finished the day 11-of-16 for 157 yards and three scores.

Bryce Williams put a bow on the day with a 22-yard touchdown run, untouched up the middle, to give the Gophers a 49-0 lead with 14:14 to play. Minnesota ran for 317 yards, averaging more than seven yards per carry. The Gophers out-scored their three non-conference opponents 149-17, and out-scored the Buffaloes 79-7 over two games. Minnesota beat Colorado 30-0 in Boulder last year.

The Buffaloes ended Minnesota’s bid for a shutout with a touchdown with 8:55 to play, with the Gophers’ reserves in the game. The Gophers out-gained Colorado 500-227, and limited the Buffaloes to 1-of-11 on third down.

The Gophers wrap up the non-conference season 3-0 and will be underdogs for the first time this year next Saturday, opening Big Ten play at No. 11-ranked Michigan State.