Colin Kaepernick. Cher. George Clooney. Charlize Theron. Sherry Lansing. Dwyane Wade. Barbara Broccoli. Jennifer Hudson. This may seem like a disparate group of powerful people in the fields of entertainment and sports. But what they have in common is a deep sense of philanthropic commitment — a desire to do something beyond a photo op for the causes that matter to them. And all these people have entrusted the same organization to help them run their charities, the Entertainment Industry Foundation.

“People come to me for advice,” says Lansing, whose blockbuster charity, Stand Up To Cancer, has raised more than $746 million to fund cancer research since she and eight other women founded it in 2008. “I often say to them, ‘You should meet the people at EIF.’ ”

In Hollywood, getting Lansing’s endorsement for a philanthropic organization is akin to getting a 100 percent Rotten Tomatoes score, so trusted is the former Paramount CEO for her judgment and impact in the nonprofit world. As Stand Up To Cancer grew quickly, eventually producing telecasts that aired in 190 countries (the biennial show will next air in 2023), Lansing saw the potential of partnering with EIF, an organization that has been backing Hollywood’s philanthropic impulses since World War II. “I thought we should become part of [EIF], because we’d be more efficient,” says Lansing, who now sits on the EIF board. “If we became a division of them, we’d be able to save money.”

This year, as EIF celebrates its 80th anniversary, the industry looks dramatically different from the way it did when Samuel Goldwyn, Humphrey Bogart, James Cagney, Joan Crawford and the Warner brothers convened in 1942 to coordinate Hollywood’s response to the war effort. The fields of entertainment and philanthropy have both evolved, but amid the rise of streaming wars, social media campaigns and pandemic-era changes like Zoom fundraisers, EIF has been a constant. The organization has grown to the point where it grants funds to more than 200 nonprofits per year and has 70 employees.

While Stand Up To Cancer eventually became a division of EIF, most organizations that come in EIF’s doors are simply looking for administrative support and strategic advice, says EIF CEO and president Nicole Sexton. “They understand that they have a big idea but they don’t know anything about the business of philanthropy,” Sexton says. “We want them to focus on impact and resource generation. We’re candid about what our role is and what our expectations are. We want partners who are committed.”

Among those with whom EIF has recently partnered are the NBA’s Wade, Chris Paul and Carmelo Anthony, who came together in 2020 to launch Social Change Fund United, which distributes grants to organizations that pay bail for people in need, help fund Black educators and provide student scholarships. “We realized the power of moving as one in a moment when the world seemed so broken, specifically as the pandemic and racial injustice devastated Black communities,” says Wade. “When we launched, we were looking to get to work right away and were looking for an organizational partner to support us in providing immediate relief to marginalized communities. [The EIF] staff has been amazing with ensuring we meet all the necessary checks and balances, setting SCFU up for the long game because we are in this work together.” EIF, for instance, handles the accounting and paperwork necessary for an organization to maintain its tax-exempt status.

A major selling point of EIF for high-profile philanthropists like Wade is its long history of being a charity in good standing. Charity Navigator, which tracks the financial health and transparency of organizations, awarded EIF four stars, its highest rating. In December 2021, Forbes listed EIF, which is a 501(c)(3) organization with $476 million in annual revenue, as No. 32 among the nation’s top 100 charities for its reach and effectiveness.

In its earliest days, EIF was known as the Permanent Charities Committee and it was intended to be a place where rival studios and agencies could gather on a single board and agree that certain problems were better solved as a group. “My grandfather wanted to unify what was happening in the entertainment industry, to make sure people were working together to leverage the funds that were raised every year,” says actor Tony Goldwyn, grandson of Samuel Goldwyn, the pioneering producer of such movies as 1946’s The Best Years of Our Lives and 1959’s Porgy and Bess. Among the group’s earliest efforts was a then-novel entertainment payroll deduction to help fund wartime agencies such as the United Service Organizations (USO). Later, the group funded the first-ever mobile blood donation center for the American Red Cross, took on the childhood polio epidemic and tackled cancer, changing its name to EIF in 1998.

Today, EIF’s board is chaired by ICM Partners CEO Chris Silbermann and includes executives from NBCUniversal, Fox Entertainment, CBS, Netflix and CAA. “Sam Goldwyn was a freakin’ genius,” Sexton says. “He designed the organization in a way that it would forever be nimble, by putting these strange bedfellows across the table from each other. The instinct to put the production heads for TV, agency heads … You’ve got the right individuals who are able to pull the right levers at the moments of most need.”

Stand Up To Cancer’s outsize success sparked a period of growth and change at the larger organization. In 2017, longtime EIF CEO Lisa Paulsen stepped down after 27 years, and the board recruited the new CEO, Sexton, who had been the chief of staff of the Central Park Conservancy. “We felt like there was more EIF could be doing,” says Silbermann, who was appointed board chair in 2016. “If the entertainment industry wanted to do something for a crisis, they could come to us.”

After focusing intently on cancer for the previous two decades, the organization’s mission began to broaden, and worthy causes quickly flowed in. Theron, who was born in South Africa, partnered with EIF to support the Charlize Theron Africa Outreach Project (CTAOP), which helps African youth keep themselves safe from HIV/AIDS; Hudson brought her Julian D. King Gift Foundation, a children’s health and welfare organization based in Chicago; Kaepernick brought his Know Your Rights Camp (see sidebar on this page); Clooney and some of his A-list friends set up the Roybal School of Film and Television Production, designed to guide children from underserved communities in pursuit of production careers; and Cher came in with Free the Wild, an animal welfare agency.

With so many TV networks represented on its board, EIF also became a go-to destination for high-profile charity telecasts, including Somos Una Voz, a concert hosted by Marc Anthony and Jennifer Lopez to raise money for survivors of 2017’s Hurricane Maria in Puerto Rico, and One Love Manchester, Ariana Grande’s benefit concert for victims of the bombing at her 2017 concert in England’s Manchester Arena.

The pandemic’s impact on the field of philanthropy was profound. But while many donors paused giving in the early, economically uncertain days of the COVID-19 era, donations then resumed with a new intensity. “All of our philanthropic partners wanted to find a way to do something,” Sexton says. One project aimed to help first responders, while another, Graduate Together, which EIF put together with the LeBron James Family Foundation, hosted a Peabody-nominated, one-hour primetime special that aired across 46 broadcast and streaming partners honoring the 3 million 2020 high school seniors who missed their graduations because of COVID-19.

In early 2020, EIF was in the midst of launching its Delivering Jobs campaign, with the goal of creating pathways to employment for people with autism or intellectual and/or developmental differences, when COVID-19 virtually halted hiring in general. “We thought, ‘How are we launching a jobs campaign at the beginning of a pandemic?’ ” Sexton says. But the campaign, which is done in partnership with Autism Speaks, Best Buddies and Special Olympics, is working, according to Tal Anderson, the autistic filmmaker and actress best known for Netflix’s Atypical (see sidebar on page 59). Anderson appeared in some of the PSAs that EIF has generated for Delivering Jobs, which have garnered more than 2 billion media impressions. Anderson points out that almost 50 percent of 25-year-olds with autism have never had a paid job, even though they’re trained and educated. “The exposure and impression the campaign is making nationally is encouraging corporations to make a pledge to reevaluate their hiring practices and create inclusive support systems in the workplace.”

Broccoli, who is best known as a producer of the James Bond films but is also a prolific producer for the stage, was looking for ways to help make the theater industry more inclusive when she was introduced to EIF through fellow producer Kimberly Steward. “The COVID crisis and the Black Lives Matter movement provided a time for reflection and an urgent desire for change,” Broccoli says. EIF became a key partner in forming Broccoli’s new charity, The Theatre Leadership Project, which invests in mentorships, training, job placement and long-term support for Black creatives in key leadership positions. “The Entertainment Industry Foundation’s knowledge and experience in building organizations has been invaluable,” Broccoli says. “They have been able to help us activate our fundraising efforts and are supportive of our focused, manageable and sustained approach.” Together with the Black Theatre Coalition, Broccoli’s charity has launched multiyear fellowships at six Broadway management offices and committed to funding three multiyear creative producing fellowships with the Prince Fellowship at Columbia University.

In a rapidly changing world, new causes constantly emerge. The Ukraine Children’s Project, for instance, launched this year to provide mental health and educational support to Ukrainian children who are either refugees in Poland or are displaced within their own country. “The organization will continue to serve the industry as its go-to philanthropic partner as long as the industry continues to see it as the vital tool that it is,” Sexton says. “Sadly, there will always be a need. And EIF will always be the answer.” 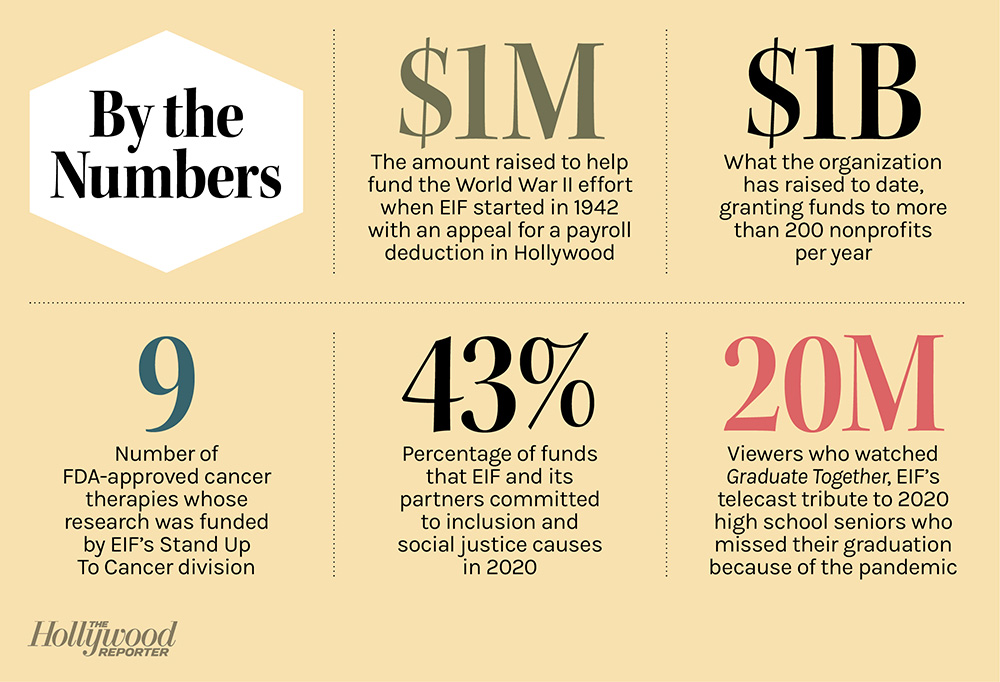 This story first appeared in the June 22 issue of The Hollywood Reporter magazine. Click here to subscribe.