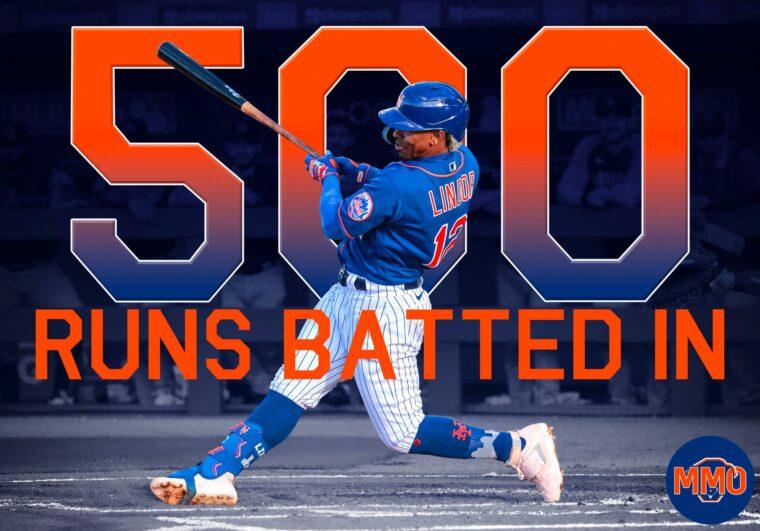 Francisco Lindor landed his 500th RBI of his career on Monday night in the Mets’ 13-3 win over the San Francisco Giants.

On the first pitch of an at-bat in the top of the third with the bases juiced, Lindor blooped a two-seam fastball off Alex Cobb sky-high into left field. Left fielder Darrin Ruf ran after the ball, but it dropped just inside the left-field line and bounced into the netting (along with Ruf) for a ground-rule double.

J.D Davis and Brandon Nimmo scored, as would have Starling Marte had the ball not caressed into the netting.

The two runs were Lindor’s 499th and 500th RBIs of his career. They tied the game at 2, then one pitch later, Pete Alonso drove Marte and Lindor home with a three-run home run, putting the Mets up for good.

The shortstop’s latest RBIs came with a man on third base, which Lindor has been good at doing in 2022, evening during his early May struggles. He has 16 of his 26 RBIs this year with men in scoring position.

“Thank God,” he joked. “Get it done, whatever it takes,” he followed, capturing the team’s overall approach to driving men in from third base in any situation.

Overall on the year, Lindor has a .719 OPS, 112 wRC+ and 1.2 fWAR, among the top ranks of all shortstops in the National League. If Lindor ends up as the team’s fourth- or fifth-best hitter with these numbers, the team is in decent shape offensively moving forward.