Former IDF chief of staff Gadi Eisenkot, a popular former general and sough-after political figure, intends to enter the arena and run in the next election, according to a Wednesday report.

Eisenkot has told associates that he will make a public announcement if the Knesset dissolves and elections are called, Channel 13 reported.

He hasn’t decided what party to join, but the most serious talks are with Foreign Minister Yair Lapid’s center-left Yesh Atid. Many parties are interested in recruiting Eisenkot, since they believe he has the ability to bring in voters both from the left and the right, the report said.

Channel 13 added that Eisenkot may initially form a new party, but this will only be with the goal of merging with an existing party to bring more candidates into the merged list. It said Eisenkot isn’t aiming to head the merged party.

He is known for the firm stance he took as army chief in favor of prosecuting Elor Azaria, a soldier who was filmed shooting dead an already incapacitated Palestinian attacker in the West Bank city of Hebron. 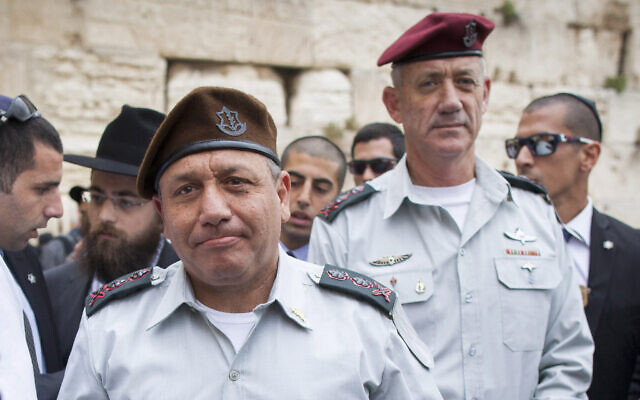 Gadi Eisenkot and Benny Gantz are seen at the Western Wall in Jerusalem, February 16, 2015, as the former prepared to take over from the latter as IDF chief of staff. Will the two former generals now become political rivals? (Yonatan Sindel/Flash90)

Channel 13’s report on Wednesday was not the first time the former army chief’s name has been thrown into the political ring.

The retired general was one of the most coveted figures during the March 2021 election cycle, with his name then linked in reports to a number parties that were active at the time, including Gideon Sa’ar’s New Hope, Yesh Atid, Telem, New Right and Tel Aviv Mayor Ron Huldai’s party, The Israelis.

Several were elected for the premiership, including Yitzhak Rabin in 1974 and 1992 and Ehud Barak in 1999.

The governing coalition appears to be on its last legs as it teeters from one crisis to another since losing its parliamentary majority in early April. Political jostling ahead of a potential election has already begun, with swirling rumors of coalition defections and government infighting.

Polls have showed that most Israelis believe the government will fall within months, and that opposition leader Benjamin Netanyahu’s right-wing and religious bloc is nearing a majority in voter support.