England players were booed by Hungary fans – mostly children – when taking a knee before their 1-0 Nations League defeat in Budapest, despite the hosts being forced to play the game behind closed doors due to racist abuse from the stands.

UEFA imposed a stadium ban after the previous behaviour of Hungary supporters during Euro 2020 matches staged in the country last summer, while FIFA issued a separate punishment after England were racially abused during their 4-0 World Cup qualifying win in September.

However, in excess of 30,000 people – mainly schoolchildren – were allowed inside the Puskas Arena on Saturday evening for the Nations League fixture as UEFA rules allow for an unlimited number of U14s to attend games behind closed doors, as long as they are accompanied by an adult.

The national anthems of both countries were respected as the players made their way out onto the pitch, but jeers appeared to be audible from the crowd when England took a knee before kick-off in what was their first visit to the stadium since they were racially abused last year.

However, UEFA will not punish Hungary for booing the act of taking a knee, as it is not against its rules.

Reporting from inside the Puskas Arena, Sky Sports News’ senior reporter Rob Dorsett said: “It was an incredibly loud environment and all eyes were on the crowd when England took a knee and the booing from thousands of schoolchildren inside the stadium was very, very clear.

“It was a strange noise in truth because these are all U14s so it was higher-pitched noise than what we’re used to when we hear booing. But it was very clear booing by the vast majority of people inside the stadium.

“It’s important to stress that it’s not against UEFA rules. Do not expect UEFA to punish the Hungarian FA further, but what I think it will do is support the feeling expressed by a lot of people within football that the image of a stadium two-thirds full of spectators for a game that is supposed to have none as a punishment for former racist abuse, is distasteful and not sending out the right message.

“There’s a further concern that these are youngsters. They did not like the gesture of England players taking a knee and they did not approve of it.”

Ahead of England’s trip to Budapest, manager Gareth Southgate said his side needed to “keep doing the right things and setting the right example” in taking a stand against racism.

But after the booing on Saturday evening, the 51-year-old admitted he could not understand the negative response to his players taking a knee at the Puskas Arena.

He told Channel 4: “The first thing is that is why we do it; to try to educate people around the world. I have no idea why people would choose to boo that gesture and I think, very often, young people can’t know why they are doing it, so they are being influenced by older adults.

“The UEFA decision is for other people to decide. We have made our stand as a team. Everybody knows what we believe and what we stand for.

“Tonight is a night where I have got to focus on the football. When you lose you can’t be talking too much about other areas because I think that would be a lack of responsibility for the result.” 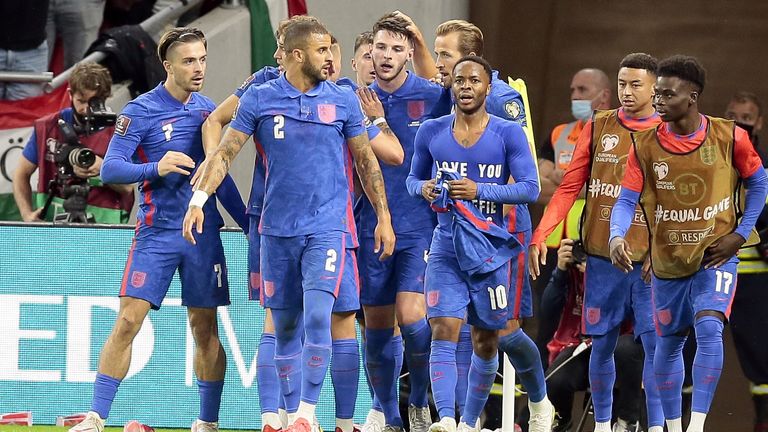 Speaking on Friday, Gareth Southgate and Harry Kane discussed returning to the Puskas Arena in Hungary for the first time since England players were racially abused there last year

England defender Conor Coady, who played 79 minutes in Budapest, says the booing was “massively disappointing” but insists it will not stop England from taking a knee.

“I heard it and it’s massively disappointing because we’ve spoken about it more than enough as a team, as players, as clubs about what we’re trying to do,” he told Sky Sports.

“We’re not going to stop doing that, but we’d like to think people understand what we’re trying to do now, so it’s massively disappointing but it won’t stop us doing it going into the next game.

“It’s important we keep on trying to take a stand as a team, as a country, to try and move things forward.”