The much-anticipated entry into the political field of former IDF chief of staff Gadi Eisenkot on Sunday did not make any immediate remarkable impact on voters, according to flash polls by Israel’s three major TV networks.

Polls on Channels 12, 13 and Kan showed the National Unity alliance gaining at best two seats, or possibly none at all. The most likely scenario remained gridlock following the November 1 elections, with neither parliamentary block gaining enough seats for a clear majority.

Eisenkot will take the third spot in National Unity, behind Defense Minister Benny Gantz and Justice Minister Gideon Sa’ar, who respectively head Blue and White and New Hope. Gantz and Sa’ar joined political fortunes in July and on Sunday rebranded their joint list with Eisenkot. Also joining the team is MK Matan Kahana of Yamina, the former religious affairs minister and a popular figure among moderates in the national religious camp.

A poll published by Kan news showed National Unity winning 14 spots in the Knesset, gaining two seats over a previous poll, if elections were held today. Channel 13’s poll had the same result while Channel 12 predicted the party would stay at just 12 seats.

All three polls kept Benjamin Netanyahu’s Knesset bloc just short of a majority, at 59-60 seats in the 120-seat parliament.

Pundits noted that an important effect of National Unity’s formation could be the further erosion of Zionist Spirit, Ayelet Shaked’s new vehicle that is a merger of Yamina and MK Yoaz Hendel’s tiny Derech Eretz party. Kahana’s move from Shaked to Gantz could bring National Unity the support of religious Israelis who may have otherwise voted for Shaked.

In all three polls Sunday, Zionist Spirit was projected to fail to win enough votes to enter the Knesset. Channel 12 noted that its share of support was now at 1.2 percent, down from 2.1% in the network’s previous poll.

If Zionist Spirit manages to enter the Knesset, it could find itself in a kingmaker position for a Netanyahu-led government. Failure to do so deprives the former prime minister of one path back to power.

The Joint List, given six seats in all three polls, historically does not join any Israeli government. This leaves the Netanyahu-led bloc at 59-60 seats and the other bloc at 54-55 seats. 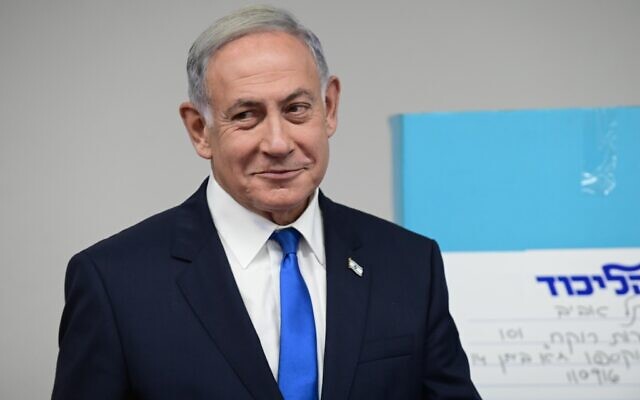 Netanyahu remained the most popular choice for prime minister in the Channel 12 and 13 polls, with 46% and 48% of support, respectively.

Although former generals entering politics have had mixed success, their entry is often hotly anticipated and expected to deliver electoral tailwinds. Eisenkot was strongly expected to enter the current race, but took his time in deciding where to land. Rather than being a flash in the pan, Eisenkot is said to want to be in politics for the next decade and was reportedly searching for a political home aligned with both his values and his ambitions.

The Channel 13 poll was conducted by Kamil Fuchs, and sampled 702 adults with a margin of error of 3.7%.

Supporting The Times of Israel isn’t a transaction for an online service, like subscribing to Netflix. The ToI Community is for people like you who care about a common good: ensuring that balanced, responsible coverage of Israel continues to be available to millions across the world, for free.

Sure, we’ll remove all ads from your page and you’ll unlock access to some excellent Community-only content. But your support gives you something more profound than that: the pride of joining something that really matters.


Join the Times of Israel Community