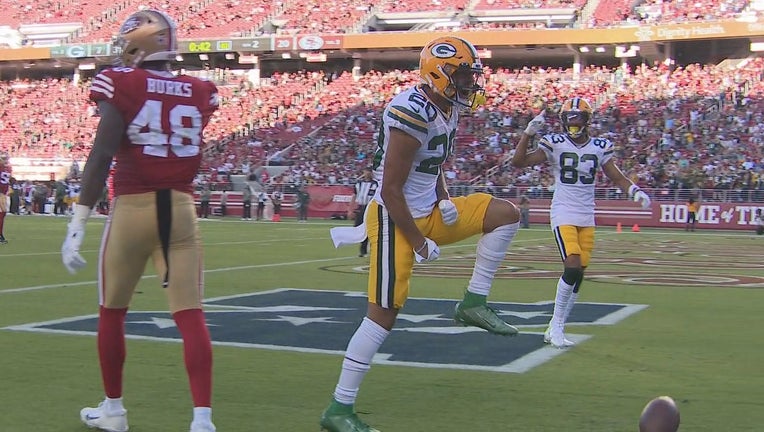 He’s now been in a preseason football game.

“That was amazing,” said Davis. “Just being able to get this opportunity was, you know, a surreal moment for me. But, you know, I just relied on the work that I’ve been putting in throughout camp. And, you know, I feel like that’s got me to this point.”

Undrafted out of the University of Wisconsin, Davis has made steady progress through his first training camp. And that’s kind of the way he would sum up game number one, too.

The highlight of the night for Davis on Friday night was a touchdown. Jordan love hits him. Davis gets into the corner of the end zone. The Packers are on the board late in the first half.

“No doubt definitely felt good,” said Davis. “And, you know, definitely give all the glory to God because, you know, I know I wouldn’t be here without him. But, you know, it’s a blessing and looking forward to continue to build off of it.”

RELATED: Check out the new and improved FOX Sports app

“On that one, you know, we changed the route of the line and just gave him a go route and I saw the way the DB was playing,” said Jordan Love. “Just try to give him a back shoulder ball. I think the ball was still a little bit too far forward, but Danny made a great play, able to come back to it, you know, catch it and then go finish it in the endzone. It was an awesome play by him.”

The Packers drafted three wide receivers this year, so they’re at the same point in their careers as Davis.

Then you throw in all the veterans trying to find playing time with the departure of Davante Adams.