Mitchell Rylee said his late mother and father inspired him when he was younger to blaze a path towards playing college basketball. As his high school career comes to a close, Rylee will have the opportunity to realize his parents’ wishes at Miami University of Ohio next season.

The Covington Catholic graduate will conclude his high school career this weekend playing in the annual Kentucky-Indiana All-Stars series. The boys and girls games will be Friday at the Owensboro Sports Center and Saturday at Southport Fieldhouse in Indianapolis. 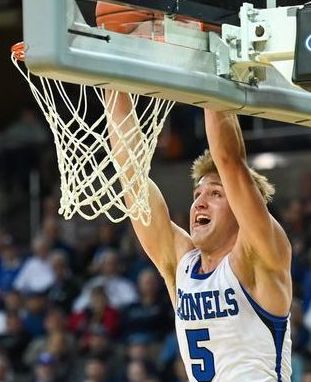 Mitchell Rylee was named the 9th Region’s top senior after averaging 15.9 points and 8.2 rebounds as a 6-foot-8 post player for Covington Catholic. (Photo by Bob Jackson)

Rylee, who began his high school career at Beechwood, moved in with his aunt and uncle and transferred to CovCath after his mother died of liver disease and his father passed from a heart problem. He said that every time he steps onto the court, his parents are front and center in his mind.

“When I got to a mature enough age when I started to realize things, one thing started to hit me, and it was that I was going to play for them,” Rylee said of his parents. “Every game I play is for them, and everything I do is for them. I just want to make them proud.”

The 6-foot-8 post player was named the top senior in 9th Region boys basketball by the Kentucky Association of Basketball Coaches after averaging 15.9 points, 8.2 rebounds and more than two blocks per game on CovCath’s state semifinal team. He scored more than 1,000 points during his high school career that began at Beechwood and ended at CovCath.

Rylee was invited to tryouts for the Kentucky boys all-star team in April. He was selected to the roster and gets to end his career playing for CovCath coach Scott Ruthsatz, who is in charge of this year’s all-star team. 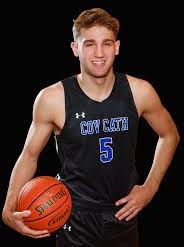 Mitchell Rylee will continue his playing career at Miami University of Ohio. (Photo from LaRosa’s MVP of the Week)

“It’s a wonderful honor,” Rylee said of his selection. “I set this goal at the end of last year to make the all-star team after learning about it and the deep history. Playing under coach Ruthsatz a couple of more times is special too, most kids don’t get to do that.”

Ruthsatz isn’t the only familiar face that Rylee crossed paths with recently. Last weekend, the Kentucky All-Stars played an exhibition game against the Kentucky Junior All-Stars. One of the players on the junior team was CovCath guard Evan Ipsaro.

Rylee was the leading scorer in that game, netting 26 points in his team’s 106-10 loss to the juniors. He said he’s been able to find common ground with his senior all-stars teammates despite never playing with or against most of them.

“Being the only guy on the team from Northern Kentucky definitely means something,” Rylee said. “Many of us are chasing the dream of playing college basketball. Just being able to connect with them and seeing that all of these kids are going to different schools across the United States, so just being able to know them for the rest of my life is special.” Next post Accenture opens an advanced technology center in Indore