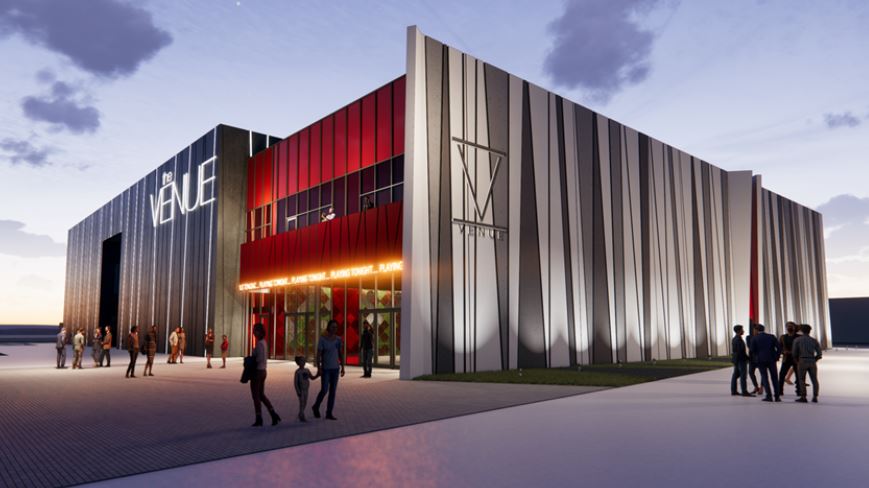 More than $93.5 million in new commercial construction projects got underway in the Des Moines area in May, including the Live Nation entertainment venue in Waukee, a review of area building permits shows.

Harry Coin, a Quad Cities developer who is a principal of the 40-acre KeeTown Loop development planned on the northwest corner of Grand Prairie Parkway and Ashworth Road in Waukee, announced last fall that Live Nation Entertainment Inc. had signed a 20-year lease agreement to occupy a 3,500-seat concert venue. The venue is the centerpiece of the $100 million entertainment district that is expected to also include retail shops, restaurants and one or more hotels.

Live Nation Entertainment, which includes Ticketmaster, Live Nation Concerts and Live Nation Sponsorships, is expected to bring 100 or more events annually to the venue, which has not yet been named.

The event facility will be about 30 feet tall and include more than 57,000 square feet of space, according to a site plan approved by Waukee officials. The facility will include space on the ground floor for a stage and seating or standing space for concertgoers. Also included is tiered seating, a VIP lounge, a kitchen, a bar area and restrooms.

Construction is expected to be completed by late 2023. Coin has said the first event will likely be held in the facility in late 2023 or early 2024.

Other highlights from May’s commercial building permits include:

• A $10.2 million permit issued in Ankeny for a 108-room Staybridge Suites Hotel that is under construction at 2602 S.E. Hulsizer Road. The project is being developed by BMP Hotel Development LLC. The hotel will have a footprint of nearly 66,000 square feet, according to city documents. The Plan and Zoning Commission approved the site plan in December 2020.

• A $2.7 million permit issued in Urbandale for the foundation work for the new headquarters for Worldwide Logistics, a company that arranges transportation of freight and logistics services across the country. The company began the development process for the new headquarters at 12408 Meredith Drive but the pandemic stalled the project. Construction is expected to be completed by late 2022.

• Permits valued at $2.5 million each for strip shopping centers at 6920 and 6960 E.P. True Parkway in West Des Moines. The site is located north of Jordan Creek Mall. The project’s developer is Jordan Creek Point LLC. Plans for the project show restaurant and retail uses in the buildings. Construction is projected to be completed by 2023, according to city documents.

Commercial building permits
issued in May

Building permits were issued for 28 new commercial projects in May by area communities. The value of the new permits totaled more than $93.5 million, a review shows.

You can also view commercial building permits issued in 2021 by clicking here. Next post The Controversial Colts Career Of Mike Vanderjagt