He would go on to become an influential, if occasionally overlooked and often hard to pigeonhole, artist whose distinctive use of color and expressive figuration broke from the reigning dogma of abstract expressionism that dominated the New York of the ‘50s and ‘60s.

“This House Is Mine” is the first retrospective of Thompson’s work since a groundbreaking 1998 exhibition at the Whitney Museum of American Art curated by Thelma Golden and Judith Wilson that introduced his unique vision to the larger art world.

“Bob Thompson: This House Is Mine” at the High Museum of Art focuses on the colorful artwork of this artist heavily influenced by Old Master painters, who died prematurely, in 1966 at the age of 28.
Courtesy of High Museum of Art 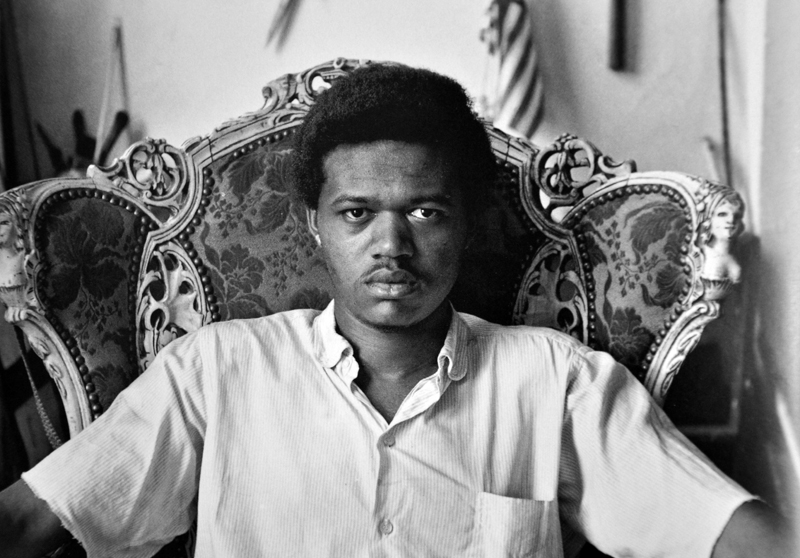 “Bob Thompson: This House Is Mine” at the High Museum of Art focuses on the colorful artwork of this artist heavily influenced by Old Master painters, who died prematurely, in 1966 at the age of 28.
Courtesy of High Museum of Art

That was the first time Michael Rooks, curator of modern and contemporary art for the High, had seen Thompson’s work, which he described as avant-garde “in that particular moment in time when painting was struggling to assert itself without apology.”

“This House Is Mine” celebrates a sometimes-unsung figure in art history who has proven deeply influential for contemporary Black artists like Rashid Johnson and Henry Taylor, who contribute essays extolling Thompson’s virtues in the show’s accompanying catalogue. But it also builds upon the Whitney exhibition by reflecting our changing times and a need to rectify larger problems of representation in the art world.

For Diana Tuite, who organized the show as curator of modern and contemporary art at the Colby College Museum of Art in Waterville, Maine, “This House Is Mine” tackles a quandary that art institutions around the Western world, which have historically favored artists of European descent, are wrestling with: how to recognize the unacknowledged talent of both present and past artists of color.

It is her attempt to answer the question she posits: “How can his work help us to reveal the structures that continue to shape inclusion and exclusion within the art world?”

While Thompson could go against the grain in his artistic approach, he was very much an insider in the vibrant bohemia of New York in the early ‘60s, a subterranea of jazz, “Happenings” and Beat literature where his peers were artists Red Grooms and Allan Kaprow, musicians Ornette Coleman and Charlie Haden, writers LeRoi Jones and Allen Ginsberg and the creatives who made the West Village Cedar Bar their clubhouse. 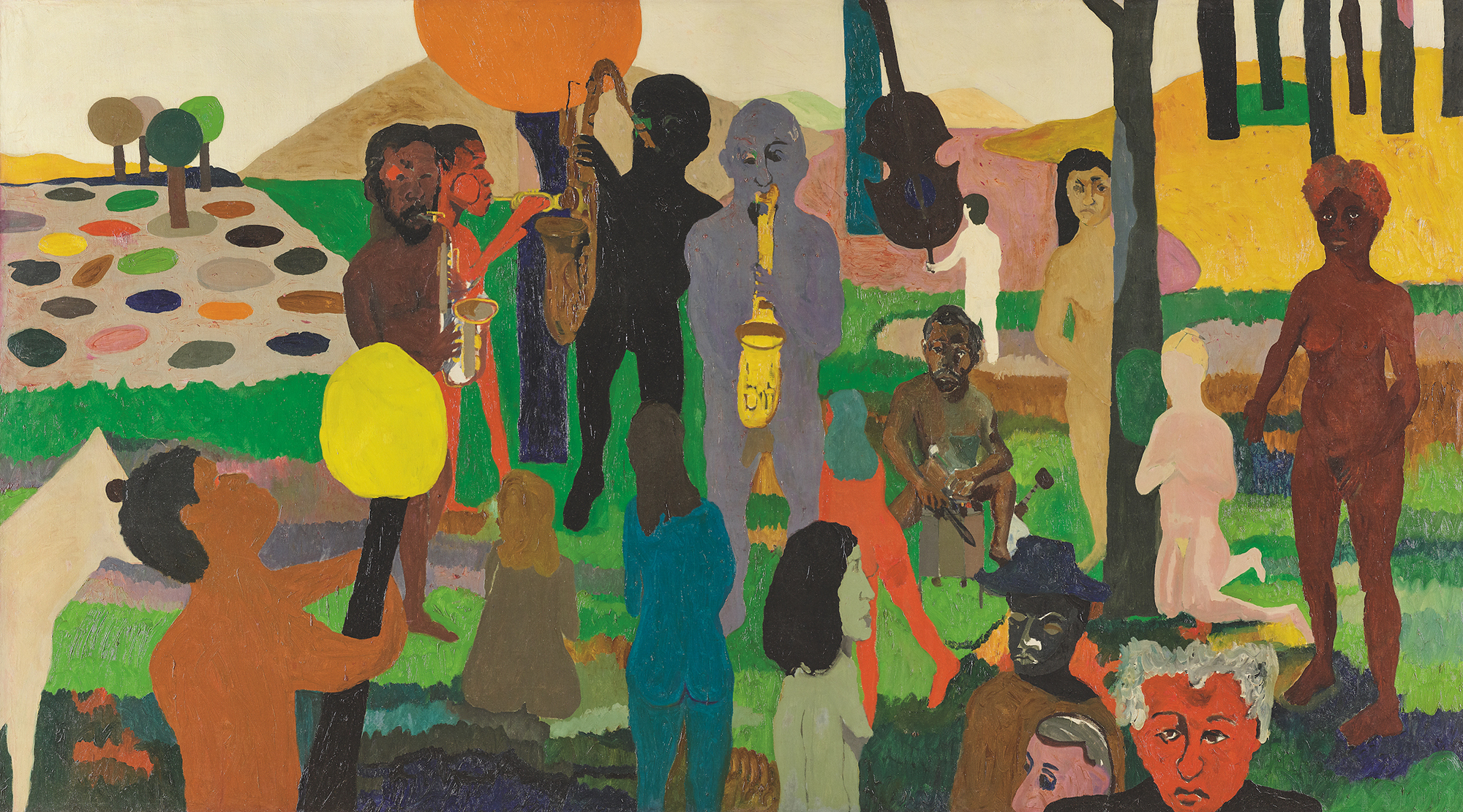 In fact, Thompson’s paintings, with their sensuous silhouettes and a Matisse-evocative litany of bold primary colors, have often been likened to the music and musicians Thompson loved. Filled with dramatic crescendos and suggestive movement, his paintings even occasionally took actual musicians like Nina Simone as their subjects.

But the most immediately striking dimension of his art may be those blazing canary yellows and Yves Klein blues, his fire hydrant reds and sugary lilacs, and how profoundly they scramble our expectations of color as an indicator of race.

“People try to map race and gender on the figures he represents,” says Tuite. But it’s a fool’s errand. Instead, she says, “he presents us with something inherently unstable. His exuberant use of color challenges the very systems in which colors are used as markers for racial otherness. He expands the universal language of art so that it includes aspects of the lived Black experience but does so without relying upon color cues.”

For that, and other reasons, Thompson’s work was ahead of its time.

“He was just starting out and was able to keep trying things on before any critical expectations could be assigned to him or could redirect him. This is what it looks like to make art for yourself.”

The show’s title comes from a characteristic Thompsonian reverie: a lush landscape with sensuous, silhouetted figures rendered as featureless abstractions in pulsating shades of yellow, purple, green and orange. “This House Is Mine” (1960) fits within his unique painterly lexicon, an often unsettling universe of swooping birds, serpents, monsters and spectral figures, and scenes of unbridled sex and moments of disturbing violence. 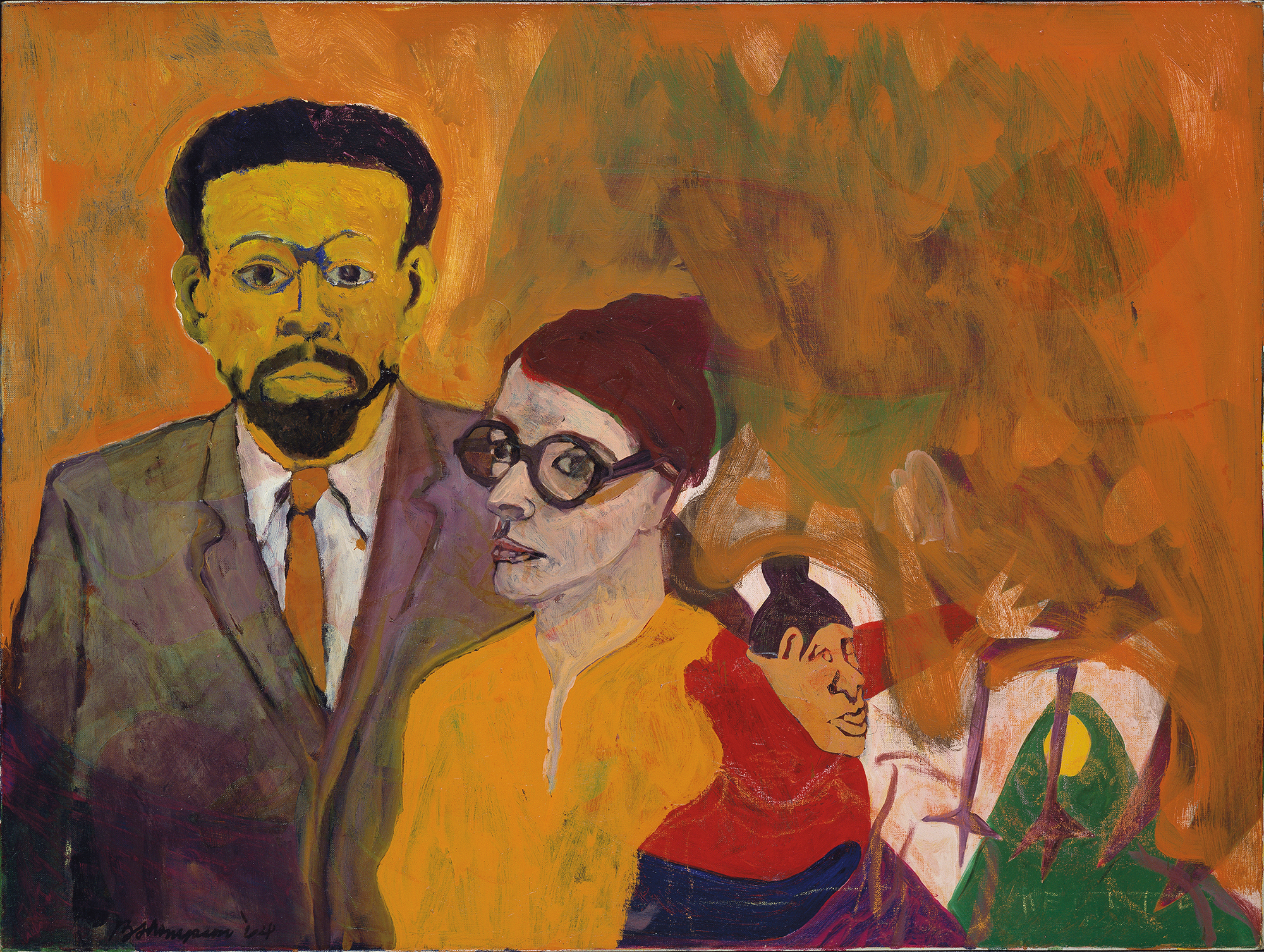 In style, his work was vanguard. But Thompson’s themes and influences were fugitive, too. One of Thompson’s most lasting legacies was expanding the vision of what Black American artists could do in referencing the revered history of oil painting.

His extensive time spent in Europe allowed him an immersion in some of art history’s masterworks, which would imprint his own artwork indelibly.

Thompson’s paintings were often re-interpretations of works by art history’s masters. He borrowed from those historical paintings — which themselves drew from myth and religion — a hyperbolic taste for visual and thematic excess in depicting the battle between good and evil. In Thompson’s hands, those classical narratives were recast as reflections of the often violent circumstance of Black American life.

Jacopo Tintoretto’s “The Origin of the Milky Way” (c. 1575), when interpreted by Thompson in “Milky Way” (1964), becomes a psychedelic rhapsody of figures painted in a Crayola rainbow of hues acting out gestures that recall the original work but also challenge it in bold new ways.

In Nicolas Poussin’s “Bacchanal with Guitar Player” (c. 1627-28), pale flesh and blue skies are reworked by Thompson in “Homage to Nina Simone” (1965) into an otherworldly fantasy of red, pink, yellow and blue bodies set against marbled skies and a kaleidoscopic landscape.

Curator Adrienne L. Childs, this year’s High Museum David C. Driskell prize winner, notes in her “This House Is Mine” catalogue essay, “Thompson was one of the first Black artists to devote the majority of his creative output to quoting European art, or to riffing on the masters.”

Laying claim to a history that only white artists had previously “owned” not only offered Thompson a unique opportunity to explore themes of race, justice, freedom and sexuality, it made him into a maverick whose boldness provided a framework and freedom for other artists of color.

As a result, Thompson has changed how Tuite now looks at “the masters” with their grandiose expressions of vice and virtue, rapture and piety.

“I see European painting differently because of him,” she says. “And often I see things that make me laugh. His sees through the rigidity and absurdity of historical painting’s codes and calls into question what we have come to accept as pictorial realism.”

And because of the groundwork Thompson laid, contemporary Black artists are continuing the conversation.

“In recent decades, artists like Kerry James Marshall, Mickalene Thomas and Titus Kaphar, to name a few, have made it possible for us to appreciate the audacity of what he accomplished,” says Tuite.

“We’ve amassed more context for understanding his project because we’ve seen its afterlives in the work others are making.”