Prime Minister Naftali Bennett has floated the idea of departing from political life and not running in the next elections, according to Israeli television reports Wednesday.

The Kan public broadcaster reported that Bennett raised the idea at a meeting with fellow members of his Yamina party, but said he has not made a final decision.

The prime minister has not publicly addressed the matter.

Yamina MKs reportedly urged Bennett to make a decision quickly, tying their fate to his. According to the Kan report, they are also likely to quit if Bennett does.

The Knesset approved a preliminary reading of a bill on Wednesday to dissolve itself. Once it passes the necessary legislative hurdles, Israel will head to its fifth election since 2019 and Foreign Minister Yair Lapid will become caretaker prime minister until a new government is formed.

Polls aired on TV networks Tuesday showed that Bennett’s Yamina would only win four to five seats, compared to the seven the party picked up in the 2021 elections, which could play a role in encouraging the outgoing premier to hand over the reins of his party. 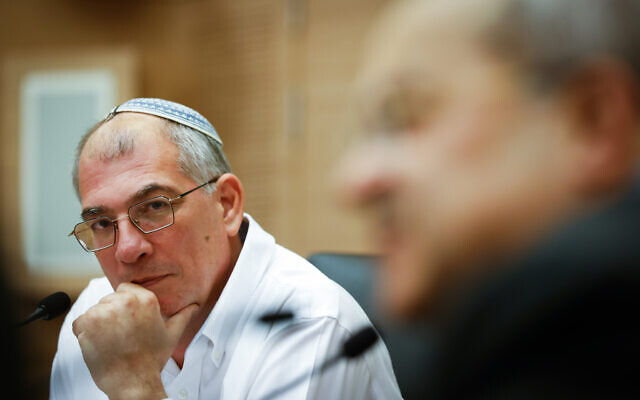 Meanwhile, Channel 13 reported Wednesday that before Bennett decided the prospect of salvaging the coalition was over, his proxies offered to appoint Yamina rebel Nir Orbach to a powerful position of his choosing in exchange for resigning from the Knesset.

Orbach was reportedly offered the chair of Mifal HaPais, Israel’s national lottery, or to serve as director-general of Keren Hayesod, the country’s official fundraising body.

The Yamina lawmaker recently dropped his support for the government, citing the refusal of coalition MKs who refused to back crucial legislation applying Israeli law to Israeli citizens living in the West Bank; the decision left the government with a parliamentary minority.

Bennett was first elected to the Knesset after leading the Jewish Home party to win 12 seats in the 2013 elections. He went on to serve as a minister in Netanyahu-led governments.

He failed to pass the electoral threshold with his New Right party in the April 2019 elections but was given a second chance when another round of elections was held in September that year, regaining a Knesset seat as part of the Yamina faction.

Following elections in 2021, Bennett broke from his old ally Netanyahu and formed a historic, diverse unity government, with himself as premier. The coalition collapsed under the weight of defections in recent months, many from his own party, due to ideological divisions with coalition partners.

Supporting The Times of Israel isn’t a transaction for an online service, like subscribing to Netflix. The ToI Community is for people like you who care about a common good: ensuring that balanced, responsible coverage of Israel continues to be available to millions across the world, for free.

Sure, we’ll remove all ads from your page and you’ll gain access to some amazing Community-only content. But your support gives you something more profound than that: the pride of joining something that really matters.


Join the Times of Israel Community