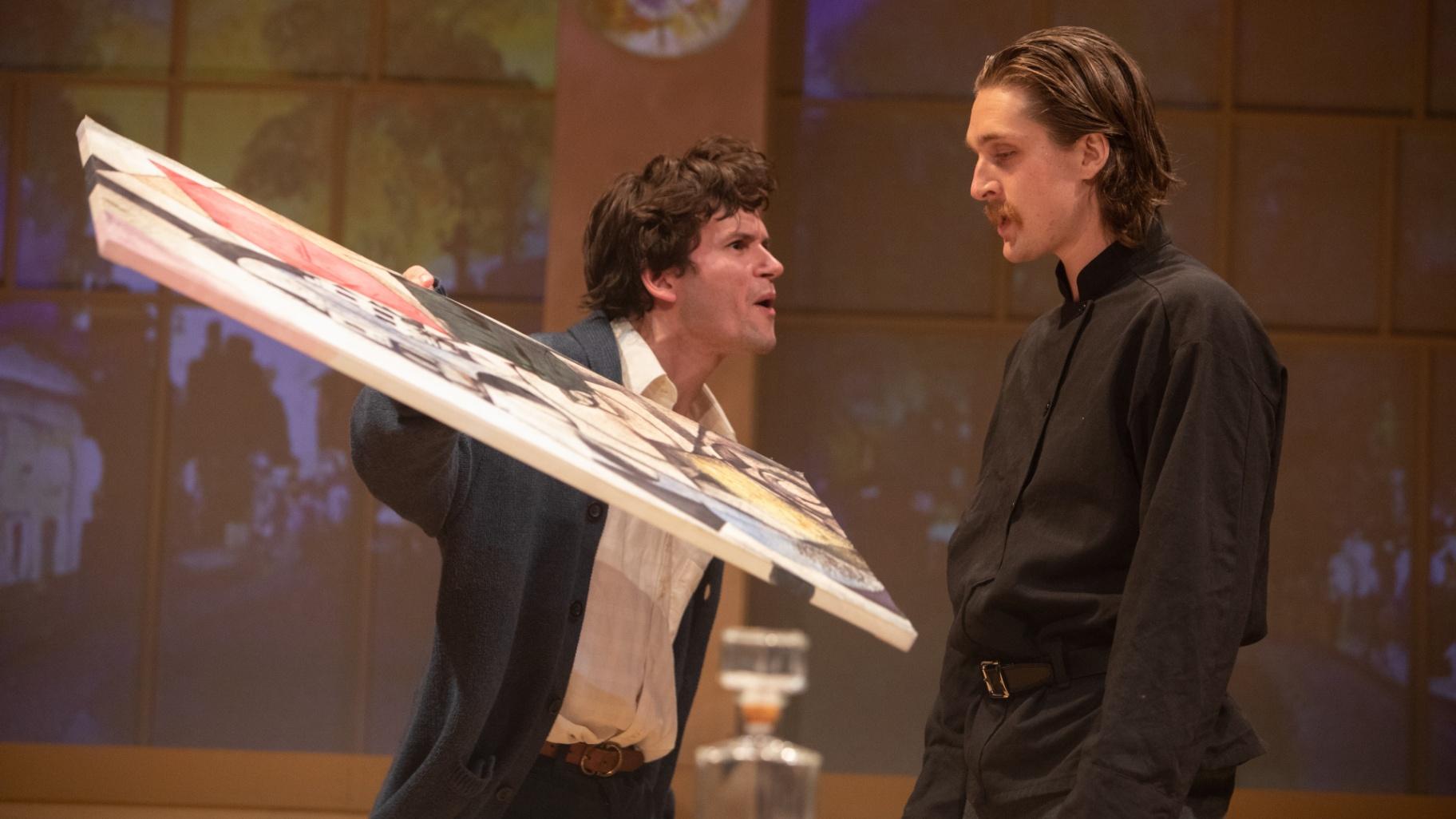 The time is January 1919 to May 1920 — a brief moment of possibility in the wake of the Russian Revolution.

The place is Vitebsk, a city in what is now the Republic of Belarus, but at that moment in history was dubbed the Socialist Soviet Republic of Byelorussia. Home to a large population of Jews, it was the birthplace of Marc Chagall (1887-1985), the world-renowned artist who would spend most of his life in France, but whose magical work remained deeply rooted in the culture and folklore of his homeland.

It was in 1919 that Chagall assumed the position of commissar of arts for Vitebsk and founded the Vitebsk Art School, which opened its doors to all who wanted to pursue their artistic dreams. It also marked a brief openness to Jews.

Chagall assembled a notable faculty of traditional and radically modernist artists (the latter including El Lissitzky and Kazimir Malevich), and it was here that the trouble began. It is this clash of artistic egos and political outlooks that drives James Sherman’s immensely entertaining play, “Chagall In School,” a Grippo Stage Company production now receiving its world premiere at Theater Wit.

Sherman refers to his 90-minute play as a comedy. But it is more than that as it deftly suggests what happens when a society that is unable to come to terms with dramatically different ideas and temperaments.

Chagall (winningly played by John Drea, whose boyish looks and open spirit capture the artist) is the humanist here, but as he confesses, he is definitely not possessed of an administrative personality. (His adored and adoring wife, Berta, played by the feisty Yourtana Sulaiman, definitely possessed that gift.) His vision of the school is to be open to all possibilities of expression, but that turns out not to be the temper of the times.

An artist with a uniquely magical, otherworldly touch, whose paintings were filled with characters who often appeared to be floating above the towns in which they lived, Chagall also infused his work with elements of the Cubist style he had picked up earlier while living in Paris. But hardcore abstraction was not his style.

In forming the school, Chagall tapped a staff comprised of his first art teacher, Yuri Pen (ideally played by Fred A. Wellisch), an older man and highly gifted realist painter; Alexander Romm (the aristocratic Peter Ferneding), a soft-spoken art historian and curator; and Vera Ermolaeva (Daniella Rukin), an illustrator, injured from a childhood accident, who is quietly drawn to the Suprematist movement and also works as an administrator. Enrolled in the school as a painfully shy but attentive student is David Yackerson (played by David Lipschutz).

And then there are the two fiery, disruptive and intensely brainy forces of “the new” — Lissitzky (Myles Schwarz) and Malevich (Garvin Wolfe Van Dernoot). They loudly and argumentatively proclaim the obsolescence of realism in art, and their belief that the only form of true artistic freedom is abstraction, which they herald as “an affirmation of the new man.” And in a sense they have become every bit as dictatorial and doctrinaire as the regime that is taking hold in Moscow, with both actors capturing the fire, arrogance and rigidity of their characters. They are unbending absolutists.

Georgette Verdin (a Cuban-American director who is currently a Goodman Theatre Michael Maggio Directing Fellow), has clearly seen to it that her actors capture their characters’ distinctive personalities as cleverly (and often as comically) as Sherman has defined them. To be sure, this is a gathering of big personalities venting their opinions at a moment of tremendous political, social and artistic change. And Chagall clearly came to see that his utopian vision for the school (and for the country) was not to be.

Abbie Reed’s simple but effective set design is enhanced by Erin Pleake’s projections of the work of Chagall, Levitsky and Malevich.

Sherman, whose many previous plays have ranged from modern day, Jewish-inflected comedies of manners to a one-man show (in which he starred) about Ben Hecht, the playwright, screenwriter and Zionist, has a gift for being at once smart and accessible.

The idea for this play came from his visit to an exhibit he saw at the Jewish Museum in New York in 2018. He ends it by cleverly revealing the fates of each of its characters. I will not do the same here other than to say that Chagall outlived them all, and died at the age of 97, and of course his work is bound to live on forever.