A fire tore through a packed Coptic Orthodox church during morning services near Egypt’s capital,  killing 41 worshippers including at least 10 children.

“Suffocation, suffocation, all of them dead,” said a distraught witness who only gave a partial name, Abu Bishoy.

“There are children, we didn’t know how to get to them,” said Abu Bishoy.

Forty-five people were injured including four policemen involved in the rescue effort.

Weeping families waited outside for word on relatives still inside the church and at nearby hospitals where the victims were taken.

The blaze erupted at the church in Giza city in Greater Cairo in the working-class neighbourhood of Imbaba, where about 5,000 people had gathered. Giza, Egypt’s second-largest city, lies just across the Nile from Cairo.

In a statement, the interior ministry said a forensic examination showed the fire began in the second floor air conditioning as a result of an electrical malfunction.

Smoke inhalation was the main cause of death, it said. Families of those who died will receive 100,000 Egyptian pounds ($5,220), according to a cabinet statement. 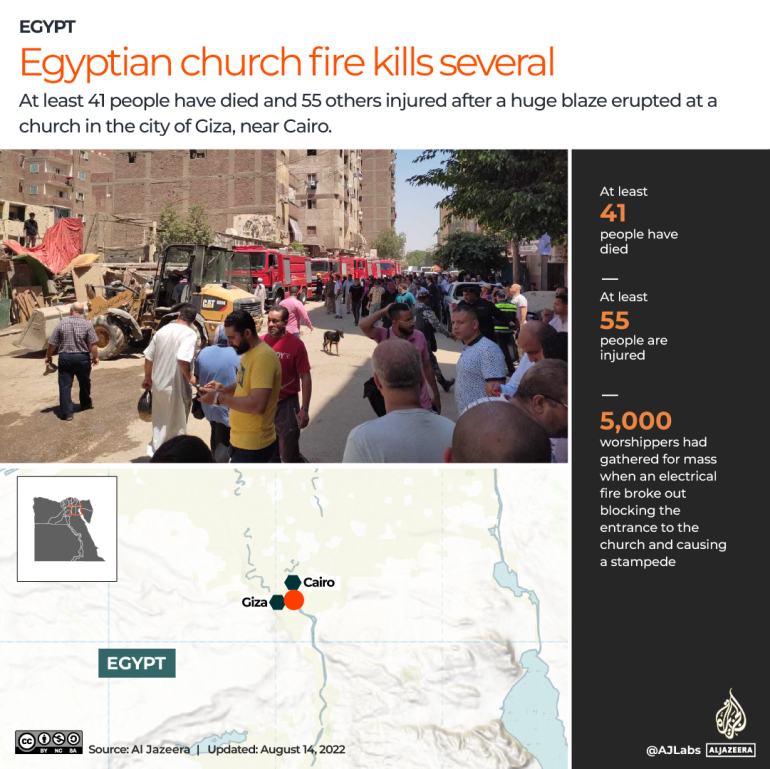 Mousa Ibrahim, a spokesman for the Coptic Orthodox Church, said five-year-old triplets, their mother, grandmother and an aunt were among those killed. He said funerals for the dead would take place at two churches in the nearby Waraq neighbourhood.

Witness Emad Hanna said the church includes two places used as a day care and that a church worker managed to get some children out.

“We went upstairs and found people dead. And we started to see from outside that the smoke was getting bigger, and people want to jump from the upper floor,” Hanna said.

“We found the children,” some dead, some alive, he said.

Fifteen fire engines were dispatched to the scene to put out the flames while ambulances ferried the casualties to nearby hospitals.

“I offer my sincere condolences to the families of the innocent victims that have passed on to be with their Lord in one of his houses of worship,” el-Sisi said on Twitter.

“I have mobilised all state services to ensure that all measures are taken,” he added on his Facebook page.

Maher Murad said he left his sister at the church after prayers.

“As soon as I got away from the church by only 10 metres [3 feet], I heard the sound of screaming and saw thick smoke,” he said.

“After the firefighters doused the fire, I recognised my sister’s body. The bodies were all charred and many of them are children who were in a nursery room in the church.”

The country’s chief prosecutor, Hamada el-Sawy, ordered an investigation and a team of prosecutors were dispatched to the church.

Copts are the largest Christian community in the Middle East, making up at least 10 million of Egypt’s 103 million people.

In March 2021, at least 20 people died in a blaze in a textile factory in the eastern suburbs of Cairo.

0
Previous post How innovation in science, technology can pave the way for an Atmanirbhar Bharat
Next post US Boosting Oil and Gas Is ‘Not Against’ Climate Change