The NKyTribune is featuring players on each of the 21 high school football teams in Boone, Campbell and Kenton counties leading up to the first games of the 2022 season this week. We will then provide focused coverage of our local teams throughout the regular season and into the playoffs.

One of the seniors on Boone County’s football team who’s looking to improve on last year’s 4-6 record is Braden McCarty. He has been on the varsity roster since he was a freshman and wants to end his career with a winning season.

The last time the Rebels finished above the .500 mark was 2011 and the best record they’ve had since then was last year, but McCarty said that’s all going to change. 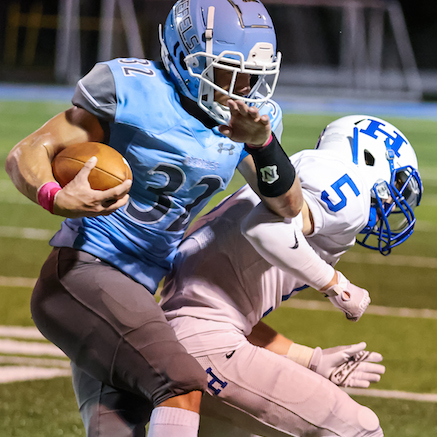 “We are ready, not just as a senior class but as a team, to reach beyond what Boone County has done in over a decade,” he said.

Last season, McCarty played running back and slot receiver for the Rebels. He had 263 yards rushing, 190 yards receiving and scored four touchdowns in 10 games.

He scored three of his touchdowns during the team’s 3-2 start. In those give games, he averaged 12.1 yards per catch and 5.5 yards per carry.

Boone County has several other returning starters on offense, but veteran quarterback R.J. West transferred to another school.

That was as big loss for coach Bryson Warner, who has an 8-21 record going into his fourth season with the program. West was one of the team’s offensive leaders with 805 yards passing and 227 rushing last year.

“There’s bound to be some challenges after any starter leaves. He was there for a reason,” McCarty said. “But our offense has been upgraded.  We have good lineman and we are all well disciplined.”

Boone County’s defensive unit lost the top five tacklers and team leader in interceptions on last year’s team to graduation. McCarty made 14 tackles at strong safety and needs to be more aggressive to help his team reach its goal of a winning season.

“I love my brothers and I’m ready to go to war every day for them,” he said.

McCarty said some colleges have shown an interest in recruiting him for cheerleading, but he has not decided on what he wants to do after high school. With football season opening this week, he’s likely to be more focused on touchdowns than tumbling.